Hunting Over a Hot Scrape (This Might Actually Work)

For the last few weeks this trail camera has captured buck after buck checking a scrape at the edge of... 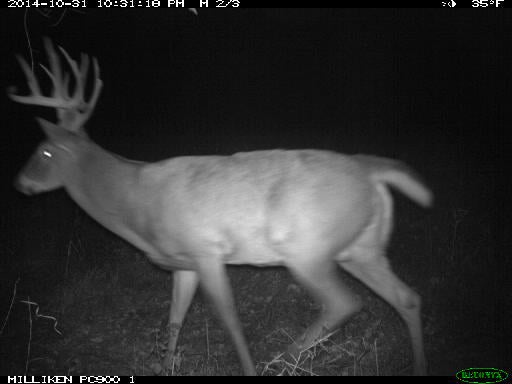 For the last few weeks this trail camera has captured buck after buck checking a scrape at the edge of an ag field. In two days I’m headed to western Illinois to hunt the property where this camera is sitting, so I’m pretty excited.

The pictures are impressive, and one of the best bucks is a regular, showing up almost every other day. The problem: Most of the pictures from this camera have been taken at night, and conventional wisdom suggests that hunting over scrapes — even the hot ones — can be futile. However, some of the bucks have shown up right at last legal shooting light. So, we’re not ruling out sitting over this scrape in the evening.

In the meantime, we’ll keep using the camera to take inventory on what bucks are using the farm and which direction they’re traveling. Here’s Whitetail Properties Land Specialist Aaron Milliken’s take on the situation…

“I hung the camera over an existing scrape, I’ve only had marginal luck with mock scrapes, especially with mature bucks.

_This time of year my cameras hung near scrapes are typically for taking inventory of the bucks using the farm. Stats show that the vast majority of scrapes are worked at night. In this case we’ve had a couple real strong bucks using this scrape right at last legal shooting light, so yes, we can definitely hunt this buck. He’s always come from the east and walked west along the edge of the food plot. _

I suspect we’ll have pictures of him on a couple other cameras nearby, that should help us put the pieces of the puzzle together. I have not checked the other cameras for several weeks, I opted to let the farm rest before we hit it hard later this week.”

As the rut keeps ramping up, I’m hoping that bucks are on their feet earlier and earlier. Some grunting could pull them in just before shooting light fades.