Dayton Chapman’s quest for his “buck of a lifetime” began when he first viewed the Kansas monster on his brother-in-law’s... 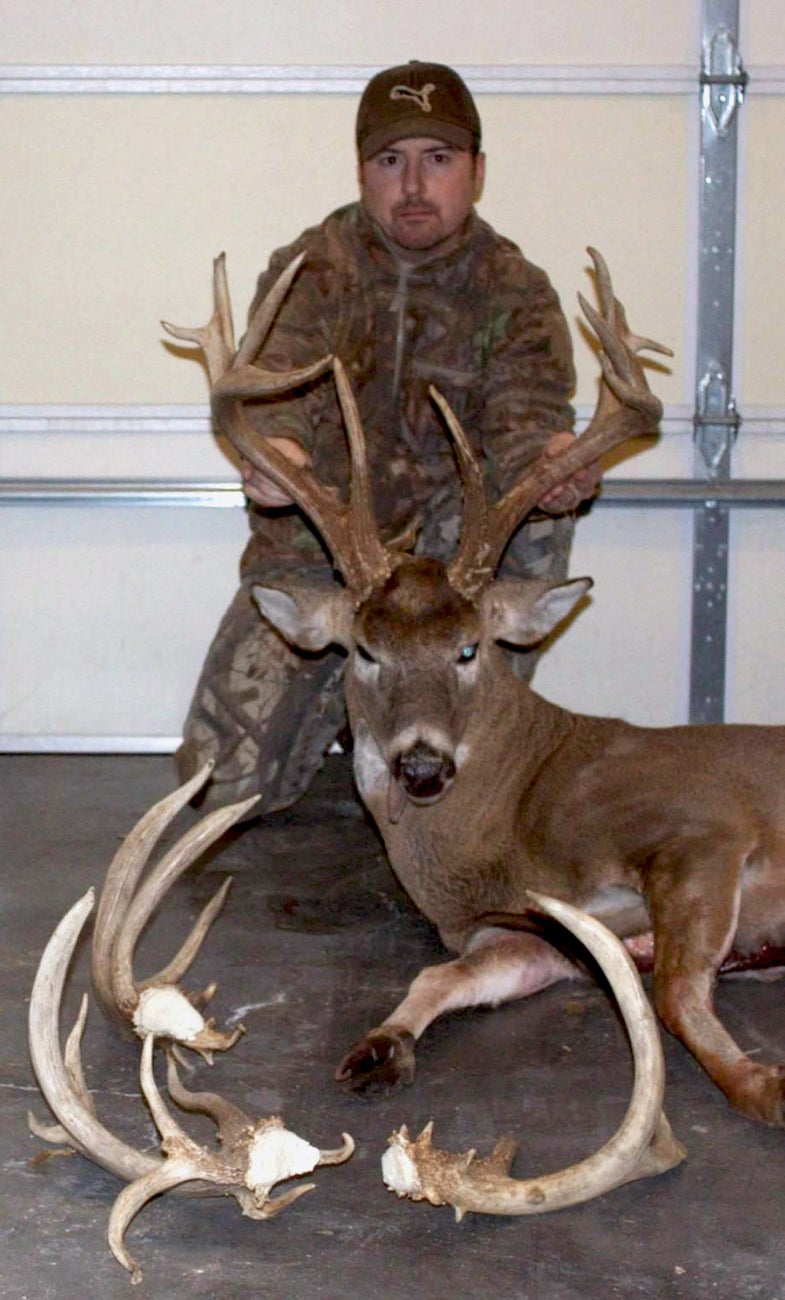 Dayton Chapman’s quest for his “buck of a lifetime” began when he first viewed the Kansas monster on his brother-in-law’s trail camera in September 2012. The two men share a 100-acre farm lease with a third party and the trio was ecstatic to catch such a bruiser on video.

“He [the buck] basically freaked us out,” Chapman recalls about watching video of the buck stroll through his property around 1 a.m. “We’ve had some pretty good-sized deer on our lease, some going 150 or so, but nothing like this guy. This guy got our hunting juices flowing.”

Unfortunately, the buck was never seen in person that season.

Chapman found the buck’s shed antlers in March 2013, proving that the deer had at least made it through the winter.

“I walked and walked for hours looking for those sheds,” Chapman confessed. “But never found anything, until one day I was driving on the property and saw one laying on the side of the road. I got out to get it, then walked around the truck only to find its match on the other side. They totaled 14 points with lots of breakage, and scored about 160 non-typical inches.”

Much like the video, the finding of the sheds only fueled Chapman and his friends’ excitement about the buck. This physical evidence would prove to be the last remnants found or seen of the buck for 2012.

Then, the buck was seen again in November 2013. 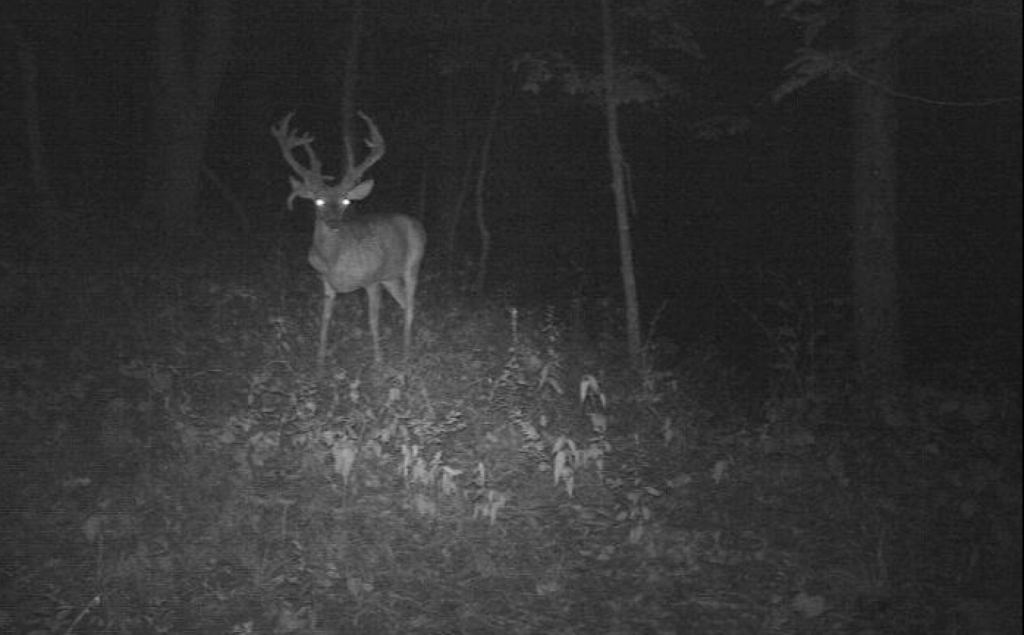 Chapman was bowhunting when a buck chased some does is his direction. “I blew my grunt call at the deer to amuse myself, not thinking much of it,” Chapman recalls. “The young buck did a wide loop around me. I turned to watch him and I saw the monster buck walking through the woods behind me.”

Chapman quickly gathered himself and tried for a shot, to no avail. “I searched for a clear shot and found a small opening in the brush. But my shot only found interference and sailed over his back. I never saw the buck again that season.”

Chapman did, however, find the buck’s latest shed come March. “I found his right side not more than 75 yards from where I found them last year. But I never found its match.”

Chapman also found where the buck had been bedding. “He was living in a small wood lot of the south end of our farm.” But in a repeat of the year prior, Chapman never saw hide nor hair of the deer for the rest of the season.

The following season proved much better. Chapman started the year with a personal best when, during one of his first mornings bowhunting, he saw ten good-sized bucks. The day got even better when the monster buck he’d been after for two years made an appearance.

“I got to watch him at about 200 yards for about a half an hour. He never got any closer.”

Two weeks later, Chapman’s 18-year-old son Tristin saw the buck from his stand but didn’t get a shot. 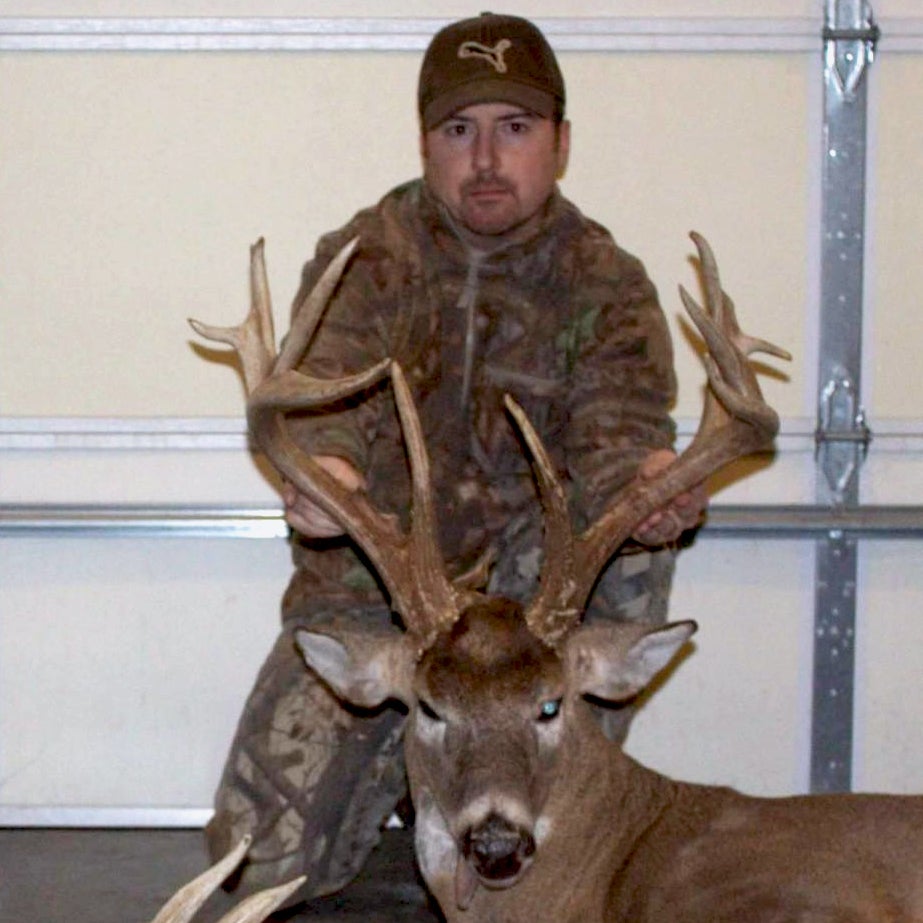 Chapman got another chance at the buck on December 9, 2014. “I was hunting the large cornfield on our property that I figured would put me closest to the big buck’s home. I was watching a small buck and a few does feed when they were startled by a coyote. When the deer fled the field I took the opportunity to move to another stand.”

Chapman decided to check another field en route to the stand. It was the right decision.

“It only took one look to recognize the monster buck I had been chasing for the past three years. As he appeared in the opening and presented me with a clear 200 yard shot, I squeezed the trigger and our three year odyssey was over.”

All told Chapman’s buck carried 21 scoreable points and will probably end up scoring between 150 and 160 non-typical inches. “He may not make the record book,” Chapman said, “But he’s got a ton of mass.”

He was definitely a monster worth chasing.

To read Dayton Chapman’s first-hand account of the hunt, click here. His buck is eligible for our Deer of the Year program, and so is yours. Upload a photo of your own 2014/2015 buck for a chance to win great gear from Gerber and land your deer on the cover of Outdoor Life magazine.

Can’t get enough of big bucks? Watch these rutting bucks and learn about their behavior during the best weeks of the year. Check it out here.