Micro Manager: Taking Inventory of Food and Cover for Whitetails

If there is any benefit to not seeing deer while hunting, it’s this: I’m able to spend my time on... 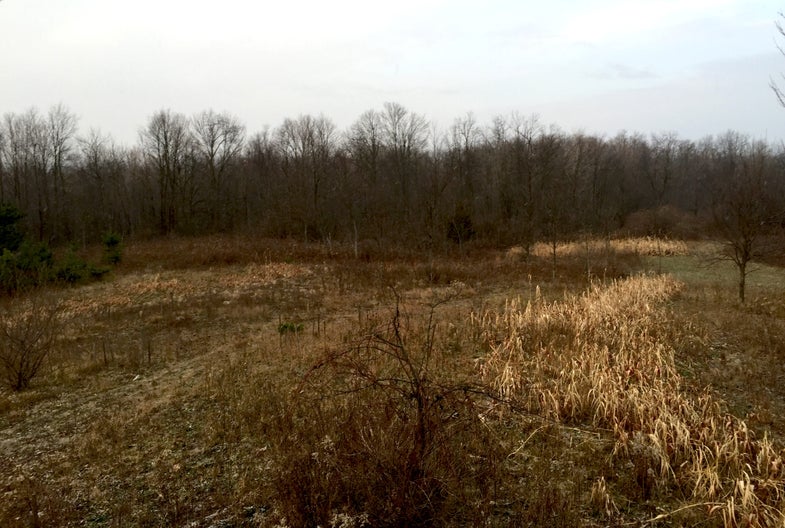 If there is any benefit to not seeing deer while hunting, it’s this: I’m able to spend my time on stand looking over the property and making a list of tasks I need to complete soon after the season ends.

And it starts with taking an inventory of trees on Noah’s Farm.

Here’s why: I need food. Let me rephrase. The deer on Noah’s Farm need food.

This season has been a frustrating one thus far and I believe that can be attributed, at least in part, to a lack of food on the place.

The property has a number of apple trees on it and last fall they were laden with fruit. I saw more deer because of it. This year, however, none of the trees produced apples.

There are also a few oak trees scattered throughout the property. I can identify common red and white oaks fairly easily, but these are a sub-species I don’t recognize. The dropped acorns last year, but didn’t produce this season.

I want to boost production of apples and acorns and, according to the research I’ve done, the best way to do that is by properly pruning the apple trees and reducing competition around the oaks.

I meant to prune the apple trees last spring but the never-ending winter put me too far behind to get to them.

The plan is this: Once deer season ends and before the snow gets too deep, I’m going to hit the property hard to locate fruit and mast-producing trees and mark them with flagging tape.
Come spring, I’ll be ahead of the game and ready to prune and clear out competing species around the oaks.

While I’m at it, I’m also going to inventory the cover. I already have a head start on that as I sit in the stand, waiting on deer that never show.

The ground is a good mix of timber and brushy, upland habitat. This spring I planted several hundred shrubs and bushes to enhance the cover in the open areas but it’ll be several years before those contribute much to the overall habitat. There are a fair amount of grasses. In some areas, those grasses are thick and provide good cover. In others, they’re sparse and contribute very little to the quality of the cover.

It’s those sparse areas that I want to mark, and that’s best done in winter. Why? That’s easy. Take a look at your old trail camera photos from the same location. Compare a photo taken in September or early October with one taken in late December or January. What’s thick and nasty in September might seem barren and sparse in winter. And it’s the cover after leaf-drop that I’m most concerned with.

So, what do I intend to do with those sparse cover areas?

Planting corn will provide both food and cover. (In a future entry, we’ll dive into the topic of corn varieties. Do deer prefer one type over another? Actually, it seems they do . . .)

I’ve read plenty about corn as a component of deer habitat (and I have a fair amount of experience with it after growing up in an ag-rich area). The feedback is mixed. Some habitat gurus love it, others hate it.

All I know is this: When the guns start booming and pressure ramps up, deer in the areas I hunt gravitate to standing corn. I think adding a few acres of standing corn to the mix will provide a great late-season food source while providing excellent cover, at least until the shrubs and bushes I planted this spring have a chance to mature.

I did plant a “screening” blend this year of Egyptian wheat and sorghum in an attempt to improve the existing cover base—with little effect. The screen didn’t grow very well and, in the areas that did, the cover was flattened in the first snow and winds of December. Corn doesn’t do that.

As I hunt the final few weeks of the season, I’ll be keeping tabs on the cover types deer seem to utilize and taking notes on those areas where existing cover isn’t enough.

If I can enhance the production of the existing apple trees and the oaks while adding cover and food in the form of standing corn, I think I’ll be doing plenty to solve the issues I’ve identified with the property this season.

If nothing else, it’ll be a beneficial experiment. And, perhaps, that’s the best thing about owning my own chunk of land.

It may not be great now. But there’s nothing stopping me from trying to make it better.