The first few moments after seeing a big buck are unlike anything else I can think of. In just a... 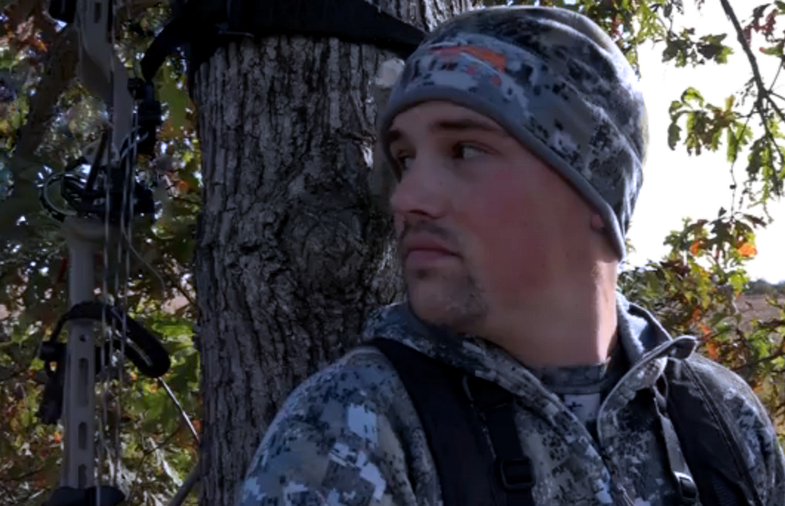 The first few moments after seeing a big buck are unlike anything else I can think of. In just a split second you might experience shock, disbelief, and even confusion—not too unlike the chemical response to a narrowly avoided car crash—but what follows is the real kicker. Now, amid a face melting adrenaline dump, you’re faced with the unenviable challenge of somehow picking your jaw up off the ground, taming your frazzled nerves, and preparing for the even more pressure-filled moment of the approaching shot.

So when I first glanced over my shoulder last Friday evening and caught a glimpse of his rack, you can imagine how I felt. As if a friend had popped a balloon right behind my ear, I nearly jumped right out of my seat. But quickly the realization that I might get a shot brought me back down to earth, albeit a very shaky earth. I reached for my bow, checked my watch, and prayed I’d have enough time to get a shot.

He was the largest eight-pointer I’d ever seen in person and had one of those racks so tall and wide that it almost looked unnatural. But just as quickly as the initial excitement came, another realization followed. He was too late.

As darkness settled upon me, no matter how much I mentally urged him on, the buck continued to take his sweet time meandering through the briars and grasses between him and me. Soon light had faded enough that I knew a shot would no longer be possible.

Still though, here he came. Closer and closer, just as I’d hoped he would, only five minutes behind schedule. And before I knew it, there he stood; 20 yards away, perfectly broadside, pausing so kindly, as if waiting for the arrow that now rattled on the rest attached to the bow that I shakily held down at my side. Though my nervous system hadn’t yet come to terms with it, my mind knew that there would be no pull of the trigger tonight. But as a product of this late arrival, I was afforded something that I don’t often receive. I simply got to watch.

So often when a buck of our dreams comes into view our minds simply melt and we slip into auto-pilot, just barely holding it together well enough to perform the simple act of remaining upright on our own two feet and releasing an arrow. But tonight, with the pressure of a shot lifted off my shoulders, I simply watched in admiration. Despite being too dark to shoot, I could clearly see his barrel chest rise and fall with each deep breath he took, his tongue flicked in and out as he checked the air around him, and his head swayed heavily side to side as if the antlers on top might topple him over at any second.

And in that moment. I wasn’t disappointed at all. I wouldn’t be getting a shot tonight. No meat for the freezer. No monstrous rack for the wall. But I would have a memory, and I would have this moment. And it was unlike anything else I can think of.