Next week I’m headed to Illinois to scout a 240-acre property (pictured below) with Aaron Milliken, a land specialist with... 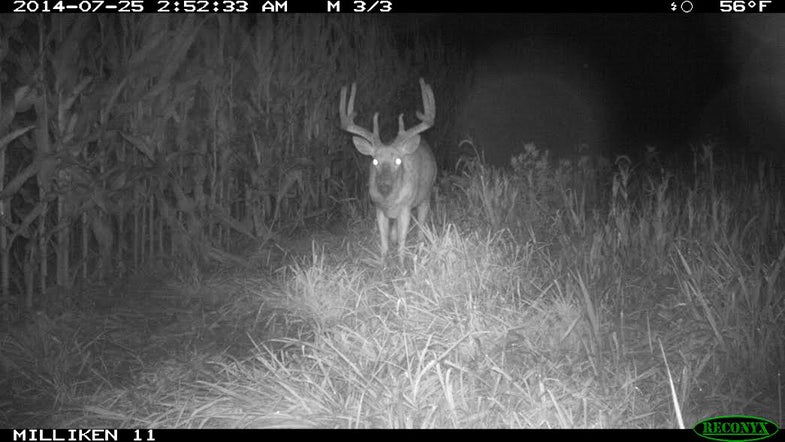 Next week I’m headed to Illinois to scout a 240-acre property (pictured below) with Aaron Milliken, a land specialist with Whitetail Properties. The plan is to set trail cameras, hang stands, and hopefully zero in on a few mature bucks for our hunt this November.

But Milliken already has a head start on me. Last week he sent me this photo of a monster 8-point in velvet.

He caught the buck coming out to feed at the north end of a cornfield, right in the middle of the property (see the red dot below). Right now we’re just trying to take inventory of the farm: see how deer are moving through it, locate where they’re feeding, and find out if any other mature bucks might be in the area. This buck obviously caught our attention, so with a handful of cameras we’ll try to pattern his routine later this summer and into the fall.

How are we going to do that without blowing this buck into another county? Here are some tips from Milliken.

1) Set’em and forget’em
Set your trail cameras and leave them alone for 3 to 4 weeks, Milliken says. It’s tempting to run out and check cameras every week to see if bucks are using the area, but patience is key right now. If you just let the cameras run, you’ll distribute less scent and spook fewer deer. If we bust this buck right now, we could push him off the property or, at the very least, throw off his daily pattern. Then we’ll have to start all over again. One way to avoid spooking bucks is using a trail camera that sends photos directly to your phone or email. We’ll be testing out the Reconyx Hyperfire PC900.

2) Drive, don’t walk
Milliken, and a lot of other hunters in the Midwest, will drive to his camera setups (either in his truck or a tractor) instead of walking in. In farm country, deer are used to seeing trucks and tractors. They might run out of the field when they see a vehicle coming their way, but they won’t leave the property. When the disturbance disappears, they’ll just return to feeding. But if you walk in on mature buck, there’s a good chance you’ll scare him into a different zip code.

3) Night shots can be deceiving
This buck is actually bigger than he looks. Milliken says that night photos don’t always do a buck justice. You can add about 10 inches to your estimated score (if you’re in to that kind of thing) when you’re looking at a nighttime shot.

4) Don’t get too aggressive
Yeah, it’d be nice to know exactly where this buck is bedding, but it’s not critical right now. We’ve got a good idea that he’s laying low somewhere in the timber to the north, so we’re just going to let him be and stay out of there. Over the next few months we’ll see if the buck develops a pattern that will give us an opening. But for now, we wait. The last thing we want to do is screw up our November hunt in August.

To see three killer stand locations we set up for November, click here.