“I can remember saying, that’s where I shot the deer, and then I looked at his rack and thought, but... 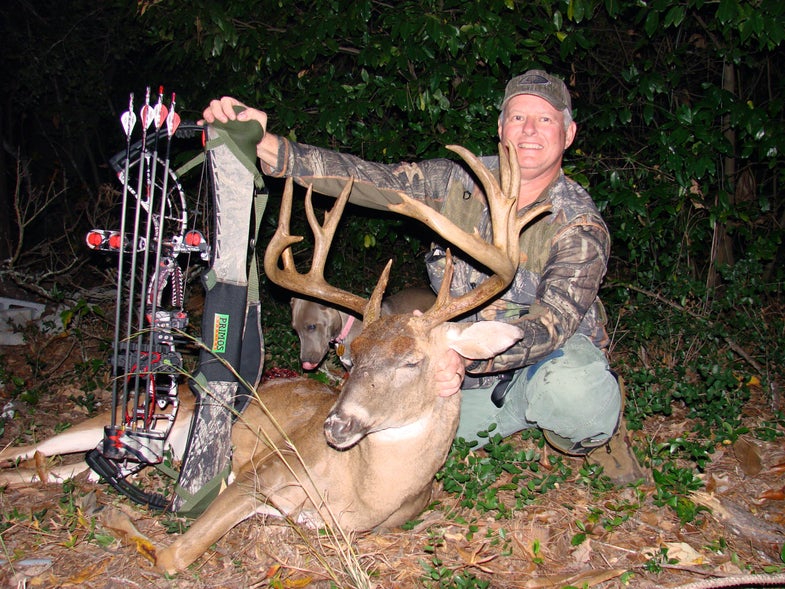 “I can remember saying, that’s where I shot the deer, and then I looked at his rack and thought, but I don’t remember that! It was like somebody had put a new set of antlers on the deer I shot.”

You can’t blame Derik Still for his disbelief as he walked up on his October 31 bow kill this year in South Carolina. The Palmetto State firearm season lasts about four and a half months, so according to Derik, “Anything over a 3.5-year-old eight point is rare.” That being the case, when he walked up on this 163-3/8-inch giant, he knew this was something special.

If you rewind the clock to that morning, Derik was getting settled into his stand 45 minutes before daylight, watching over a narrow bench part way down a high ridge. With swampy ground at the bottom and a steep 40 to 50 foot slope at his back, Derik was placed in what he believed was a well-positioned pinch point, perfect for the rut-induced chasing he expected that day.

Despite those high hopes though, the first hour of daylight passed by with nothing but squirrel sightings, and then the second. Soon Derik was starting to feel the itch of frustration. It was about quarter to 10 a.m. when he texted his hunting partner about the disappointing morning, who then encouraged Derik to stick it out until 10:30 and then head back in.

It wasn’t any more than 10 minutes after that bit of encouragement that he spotted a flash in the distance, and then the back half of a deer passing through the brush about 50 yards ahead. He stood up and as he reached for his bow he caught a glimpse of the deer’s rack and said to himself, “ Oh, this is good.”

Just moments later the deer was in his shooting lane, and Derik drew back and fired, seeing a red splotch appear right around the back of the lungs or front of the liver.

Given that the shot was a little far back, Derik decided to pull out and wait 6 to 8 hours before tracking. And he’s glad he did too, as upon his return trip that afternoon it didn’t take too long to recover his once in a lifetime buck.

After recovering the deer, Derik and his hunting partner realized that this was a deer known as the “Ghost Buck” by a few hunters on an adjoining property a mile or so away. They had captured trail camera pictures of this deer several times over the past few years, but Derik had no photos of the Ghost Buck until just 11 and a half hours before he shot him.

As Derik said himself, “You’re talking to a lucky guy.”

Still’s buck is eligible for OL’s Deer of the Year program. Upload a photo of your own 2014/2015 buck for a chance to win great gear from Gerber and land your deer on the cover of Outdoor Life magazine.

Can’t get enough big buck action? If you want to make the most of the rut each year, you’d better understand the science behind whitetail breeding behavior. Here’s what you need to know, and the photos to show you how it goes down.