While deer hunters around the country were participating in the great shed-antler rally of 2015 a couple of weekends ago,... 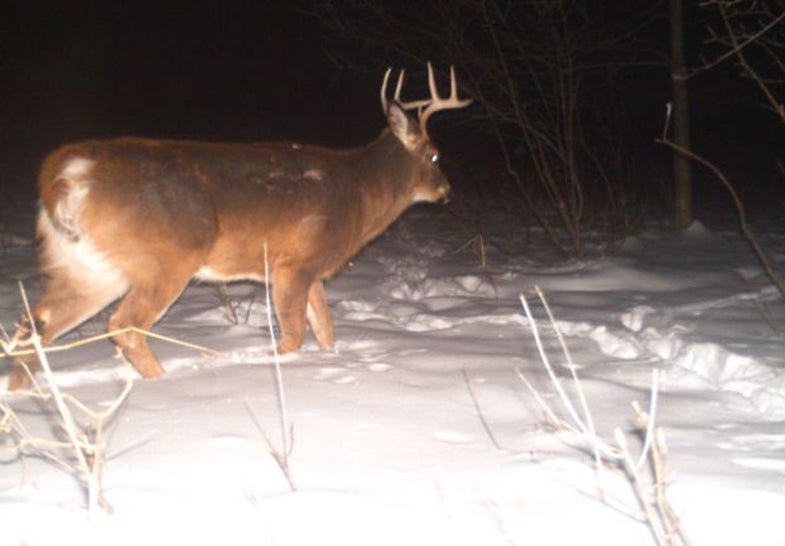 While deer hunters around the country were participating in the great shed-antler rally of 2015 a couple of weekends ago, those of us in the Northeast were shoveling snow—again. Shed hunting remains several weeks away. Enough already. We’re as tired of wringing our hands about this winter’s impact on deer and turkeys as folks in many parts of the country are of hearing about it.

It is, however, a critical time for Northeast whitetails. Winter has yet to break in many areas and the longer it lingers, the worse it will get. Snow and cold remain in the forecast for the next week. Here are theree late-breaking reports.

Western New York
Ten days ago we had 2 feet of snow on the ground with no crust and temps were still very cold (our coldest winter in memory). Up until March 10, deer movement was minimal, with most deer still in winter bedding mode. Then a little over a week ago temps rose and the snow began to melt. Deer seemed to come out of the woodwork. For weeks on end (January through early March) it didn’t look like there were any deer in our country. Now, wherever there are open fields, deer are feeding throughout the day. Last Friday I drove to Hornell, N.Y., and counted one field with nearly 30 deer in it and about 50 deer total on the trip. So, spring has burst onto the scene and deer are everywhere—lots of them. —Charlie Alsheimer

Western Massachusetts
I went for a 5-mile snowshoe hike last week and saw 15 to 20 deer. They all looked relatively fat and healthy except for the remains of one that had died from unknown causes. All that was left was some hair, but even at that site there was no coyote sign. This might be the telling week, though. And, of course, the forecast looks terrible. —George Hamilton

Vermont
Although the calendar says the first day of spring is approaching, winter is still holding its grips on Vermont. According to winter severity data collected on snow depths and temperatures statewide by Vermont Fish & Wildlife biologists, it appears the state may be on the verge of a tougher than normal winter for deer survival.

In fact, this winter may end up being the second most severe winter in the last 15 years. Deer are still confined to wintering areas right now in most of the state. The weather in the remainder of March and early April will be really critical in terms of overall survival of the state’s deer herd, particularly the younger deer. Let’s hope that Vermont doesn’t get hit with any early spring snowstorms.

Fortunately, the herd has been managed within the land’s carrying capacity for several years now. While last year’s body weights of deer (determined by examining hunter-harvested deer in the fall) declined as a result of the 2014 winter and poor fall foods, the longer-term trend in Vermont’s herd’s body weights indicates a healthy herd. _—Mark Scott, Vermont Director of Wildlife _