Whitetail Fawns: How to Predict the Peak Days of the Rut Right Now

I felt slightly pathetic. A fawn, probably having taken its first steps just a few hours earlier, had made me... 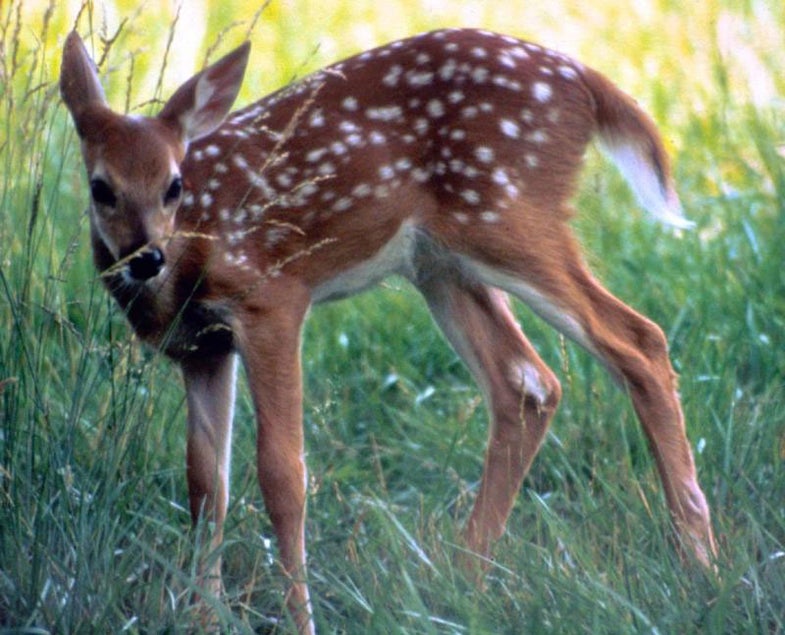 I felt slightly pathetic. A fawn, probably having taken its first steps just a few hours earlier, had made me shriek like a schoolgirl.

I had just hopped off my tractor to move yet another rock out of the field when it jumped out of the weeds and blew past me.

When my heart rate returned to semi-normal levels, I made note of the date: June 1.

Unless you live in the deep south where whitetails seem to breed whenever they feel the time is right, fawns are probably dropping in your neck of the woods.

And it’s important to think about the dates.

Much of the deer hunting media world revolves around the rut – as a member of the media clan, I know I’ve certainly written my fair share of content on all things rut-related.

I also admit that I look forward to the “rut prediction” pieces as much as anyone. But do I place much stock in those predictions? Not really.
Here’s why.

For about 10 years now, I’ve kept a semi-formal record of the dates I saw my first spotted fawn. Often, those visuals come from trail camera images. Other times, like this one, I spot the first fawns while afield (though most of them don’t cause me to lose a little bit of my manhood by scaring the crap out of me).

Why do I keep track? Because fawn drop dates, in my opinion, are the most accurate predictor of the rut.

A whitetail’s gestation period (the amount of time from conception to birth) is about 200 days. You’ll find research that indicates gestation periods ranging from 180-210 days. So we’ll meet roughly in the middle and call it 200.

Now, it’s time to do some math.

Take the date you first see spotted fawns and subtract 200 days.
The fawn I saw on June 1 was likely dropped within 24 hours. So, for our purposes here, we’ll stick with June 1.

That fawn, then, was likely conceived on November 14 – give or take a few days.

Thus for the past four years, the drop date of fawns indicates breeding occurred (roughly) between November 11 and November 16.

Those dates also happen to coordinate quite nicely with the rutting activity I observed while hunting. Funny thing is, each year the various rut prediction pieces I read indicated “early” ruts and “late” ruts and cited the “rutting moon” as triggering the breeding cycle.

The moon has minimal, if any, impact on deer movements or rut timing. That’s an opinion I’ve formed while observing deer behavior in the field, by reading science-based research and, perhaps most conclusively, by keeping tabs on fawn drop dates.

So how does all of this plan your rut hunts? And does it mean those rut-predicting guides are useless?

Well, they’re not useless. I think you simply have to read them differently.
I do think it’s entirely possible that some local populations of whitetails have slightly different breeding cycles.

On one property I hunt, I seem to see fawns a few days earlier than in another area. This is totally anecdotal and may simply be because the area with earlier fawns sightings has greater visibility than the other.

But my in-field observations seem to match – I see rut action on that property earlier than the other. Keep in mind, we’re talking about a period of roughly five days or so.

But if you are consistently seeing newborn fawns on, say, May 25-27 than you may have a local population that’s breeding a few days earlier than one where fawns don’t start appearing until June 1. At the very least, it’s an observation point you should consider when planning hunts next fall.

You can also use the calendar to help you. If you deem, based on fawn drop dates, that peak breeding is occurring on November 14, you may opt to hunt November 5-12. This should put you right in that sweet spot where some does are coming in and the bucks are going bananas.

So, looking at the calendar, we see that November 5 falls on a Saturday – does it get any better? That said, I know hunting mid-week in some areas is a big bonus because there will be far less hunting pressure. Thus I’d put in for some vacation time and hunt either Wednesday, November 2 through the weekend or take off Monday-Wednesday November 7-9.

If you haven’t had time to troll the backroads looking for newborn fawns and aren’t running trail cameras right now, you can still monitor when fawns are dropping in your neck of the woods.

Just take a look around Facebook. Seems there’s nothing more photogenic than a newborn fawn.

Photograph by the National Park Service