Whitetail Hunting Tips: Don’t Hang Too Close to the Action

Last week I hunted in an Illinois creek bottom that was absolutely covered up in buck sign. Whitetail Properties land... 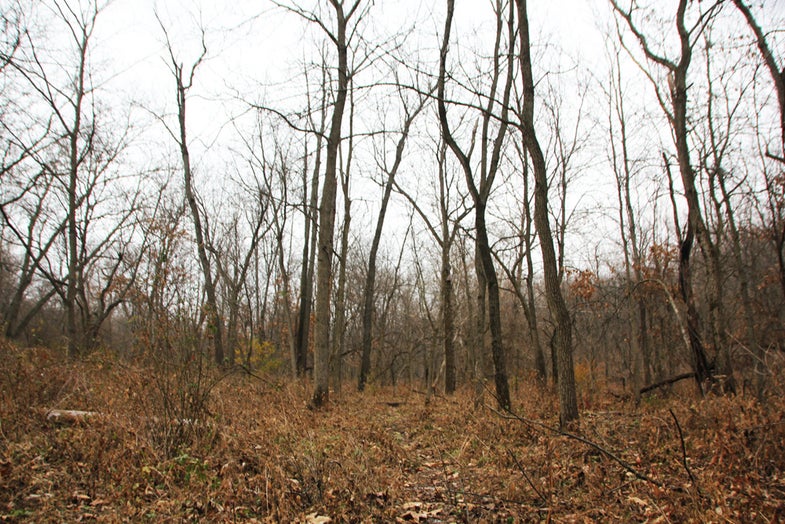 Last week I hunted in an Illinois creek bottom that was absolutely covered up in buck sign. Whitetail Properties land specialist Aaron Milliken had rigged a trail camera over a big trail and community scrape, and it revealed shooter bucks were hitting it during daylight. So on one of the first days of the hunt we snuck in to hang a stand.

The problem: The only suitable tree we could find was about 15 yards from the scrape, and only five yards from the trail leading to it (in the photo above you can see what we were dealing with). Milliken wanted to back off the scrape and hang a stand about 60 yards away where the trail funneled into a different area. But I talked him into hanging the stand close to the action with this rationale: We know bucks are coming down this trail during the day, but we don’t know exactly where they’re going once they leave. So, I’ll just shoot him before he comes all the way in.

On four different days I sat in the stand from dark to dark. I saw four different mature bucks and not a single one came down the trail that we hung the stand over. Plenty of 2.5-year-old bucks and does came down the trail and worked the scrape, but the bigger bucks would skirt the trail, staying about 40 yards out and in thick cover. They never busted me or even looked up in my direction—they just knew something wasn’t quite right, and went around.

The biggest insult to injury happened while I was off hunting other stands. The shooter bucks would come down the trail to work the scrape—at the end of the week we had the trail camera pictures to prove it.

And, these bigger bucks were rutting hard, chasing does and running off younger interlopers. They should have been rut crazed right?

My takeaway is that these big deer are not really “smarter,” they just have a different nature. If something seems off, they’ll just slink through cover or turn around in the other direction. And, this is precisely why they’ve grown to be mature. Of course, every now and then you’ll get one that just charges in, totally unconcerned with anything except breeding. But I think these cases are exceptions to the rule. Be thankful when you get to hunt a deer like this because he’ll be the easiest big buck you’ll ever kill.

The heat of the rut might get mature bucks on their feet and keep them moving through daylight hours, but it isn’t going to overcome their natural instincts.

Don’t let all the “rut-crazed” talk that you’ll hear this week persuade you otherwise.