“Knee-high by the Fourth of July.” That’s the oft-repeated line I’ve heard around my small farming community for as long... 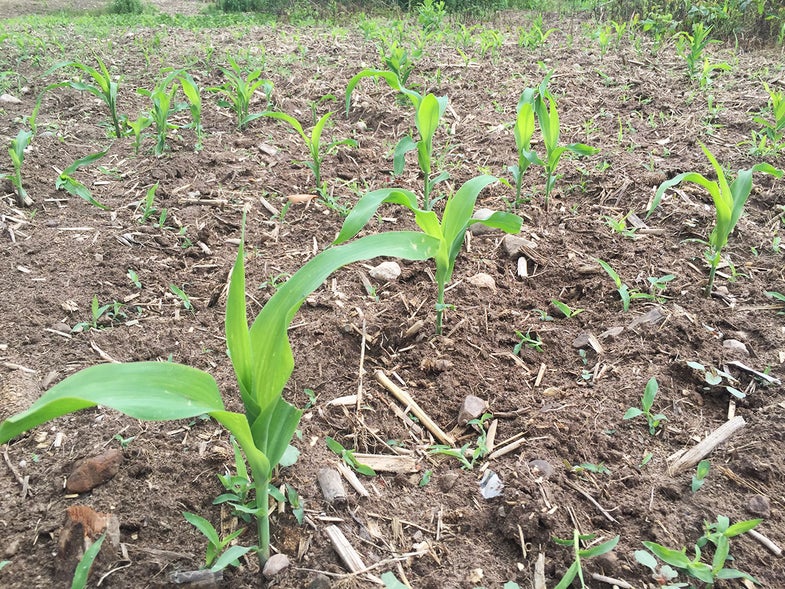 Dry summer weather is a problem for deer hunters, and it's about more than just food plots.. Tony Hansen
SHARE

“Knee-high by the Fourth of July.”

That’s the oft-repeated line I’ve heard around my small farming community for as long as I can remember. It’s a farmer’s gauge for evaluating corn health – though I suspect it no longer applies due to changes in seed varieties with greatly different maturity rates.

Regardless, no matter what type of lore you prescribe to, it doesn’t take but a glance to know my corn field is in serious trouble.

Last summer was the first I’d ever experimented with planting corn as a food plot. I knew I had plenty of challenges to overcome: less-than-ideal soil, a small plot to work with and minimal equipment.

But I planted corn anyway and the results weren’t too bad. This year I decided to give it another go and to spice things up a bit by broadcasting soybeans with the corn and, most importantly, to get the plot planted much earlier in the growing season than I did last year.

Everything seemed to go according to plan. I actually planted on time for a change, the soil tests showed improvements over the previous year and I didn’t have any equipment breakdowns.
All I needed was rain.

That was nearly a month ago. And I’m still waiting. Rain storms are supposed to be on the way. I hope publishing this blog about drought will guarantee the rain.

According to the U.S. Drought Monitor my southern Michigan property is located smack in the middle of an area that’s “abnormally dry.” I think that’s a fairly generous classification.

We did receive a brief shower the other morning and I’m pretty grateful for that but it was hardly enough to settle the dust for an hour or so.

A look at the drought map shows similar (and worse) conditions in some of the prime whitetail regions of the nation – southern Iowa, northeast Kansas, northern Missouri. All are in the abnormally dry category. Parts of southeast Iowa are in “moderate drought” conditions as are several areas in the southeast.

This causes more than concern for food plots. This is EHD weather.

The last time we had conditions this dry in Michigan was 2012 – the same year in which the state had its most severe outbreak of EHD.

EHD (epizootic hemorrhagic disease) is transmitted by tiny, biting midges. These midges live near wet, swampy areas and breed in the associated mud. When those areas dry up, much more of that gnat-producing mud is exposed and greatly increases the chances of EHD being spread to whitetails.

While much of the areas in Michigan impacted most heavily by EHD have seemed to recover, some of the areas experience drought-like conditions across the country are still very much reeling from previous EHD outbreaks including Nebraska, the Dakotas and parts of Iowa.

What can we do to prevent the spread of EHD? Unfortunately, nothing. Until someone figures out how to effectively control the planet’s climate, the only thing to be done is to pray for rain.

When it comes to helping out my ailing food plots, however, there might be something that can be done.

Earlier this week, I hauled some gear over to the property and began a little experiment. After a setback (or three), I think I’ve worked out the kinks and have a solution. Stay tuned.