Why Has the Federal Government Cut Funding for Chronic Wasting Disease Research? 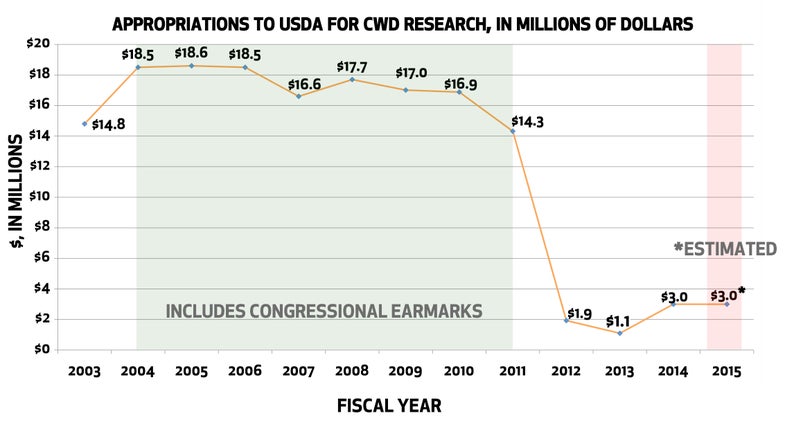 *2012 and 2013 numbers are estimates as no amount was specifically identified for CWD. 2015 total is aslo an estimate. Data is from Bryan Richards, USGS.
SHARE

Ask any deer biologist to list the top threats to the future of deer and deer hunting and you can be almost certain that Chronic Wasting Disease (CWD) will be somewhere near the top. CWD is the always-fatal deer disease that has been steadily spreading across the country. Twenty-two states and two provinces are now reporting outbreaks of chronic wasting disease. In some states, like New York, it is but a blip on the radar. In other states, like Wisconsin, it is leaving an ever-growing and very large footprint. Small blip or large footprint, the threat of CWD sends chills down the spine of professional deer managers. So why has the federal government cut funding to fight this disease?

The USDA declared CWD a national emergency [in 2001], prior to the detection of CWD in Wisconsin. In 2002 Congress began to appropriate large amounts of monies to states. While some of the funds were used for research, the bulk of the USDA-appropriated funds were used by the states for surveillance and management. Congress appropriated more than $18 million per year in the early 2000s to the USDA, which was used for research and other purposes. Other federal agencies allocated funds for research purposes, but I do not have any mechanism to track those funds. Now we are seeing appropriations in the range of $1 million to $3 million per year for CWD via the USDA.

The other experts and researchers I spoke to did not know of any other major federal funding sources for CWD research. They said it was now mostly up to the state budgets to fund CWD prevention and research.

Yet chronic wasting disease continues to spread, and little by little consume the backbone of the hunting industry (i.e. whitetail deer). “It’s as though we have CWD fatigue,” said Richards. But the problem persists, and if anything, it’s getting worse.

Dr. David Clausen, a veterinarian, former Chair of the Wisconsin Department of Natural Resources Board and well-respected CWD expert recently gave a presentation that pointed out that the number of deer tested for CWD in Wisconsin has declined drastically even though CWD has increased exponentially. He cites budgetary reasons for the decline. But even more alarming was his contention that the worst may lie just ahead. He cited recent research from Colorado State University, which indicates that plants will take up prions from infected earth, (where prions can live almost indefinitely) and now CWD prions are found to bind on grains and other plants. As far as research goes, according to Clausen, some excellent institutions are still doing research but, “as the science of CWD continues to evolve. It raises more questions than it answers and points to the need for more research.”

I recently did some research on how states are attempting to control the spread of CWD. For the most part, they are trying to isolate and eliminate known carriers of CWD. They have instituted all kinds of restrictions, which appear primarily preventative in nature. And who can blame them? Who among them wants to be the one known to ignore the threat of CWD? The deeper I dug into the issue, the more I learned about what we know and more to the point, what we think we know about the disease. Now I’m the one with chills running down my spine. State agencies are making all kinds of decisions on best guesses and and leaps of faith. Even the Chronic Wasting Alliance is forced to admit how little we actually know: “It is not completely understood how CWD is spread.”

This has lead to a standoff of sorts between the various factions of the deer community. I made a list of what the best research scientists in the country believe we actually know about CWD and compared it to a list of what we sort of know about CWD. The sort-of-know list was a whole lot longer. That’s right, all things considered we don’t know all that much about CWD.

The more I dug, the madder I got. Not because we don’t know all that much about CWD, but it almost looks like we have given up figuring this thing out. Or, at least the federal government has given up on it. If we are going to have deer to hunt 50 years from now, we need some answers and we need them fast. Answers come from good research and research takes both time and money.

Science moves slowly and by all accounts this is tough science. But, it is also science that is critical to our deer hunting future. Take a look at the graph above. Congress channeled CWD funds through the USDA. Experts are calling for increased CWD research but policy makers and politicians continue to ignore their calls. Funds for CWD research averaged a little over $18.5 million from 2004-2006 then started to steadily drop. They are now hovering around $2.0 million (2012 – 2014).

Where has our federal government gone? Has it pulled the plug on the disease that many believe has the potential to all but wipe out our deer herds?

As someone who loves whitetail deer, I think that federal funding for CWD research is not something that we can afford to cut. Maybe it’s time that hunters start demanding that our government takes up the battle against CWD once again.