How to Make Deli Meat from Wild Game

If I had to choose one type of store-bought meat that makes me cringe more than any other, it’s packaged... 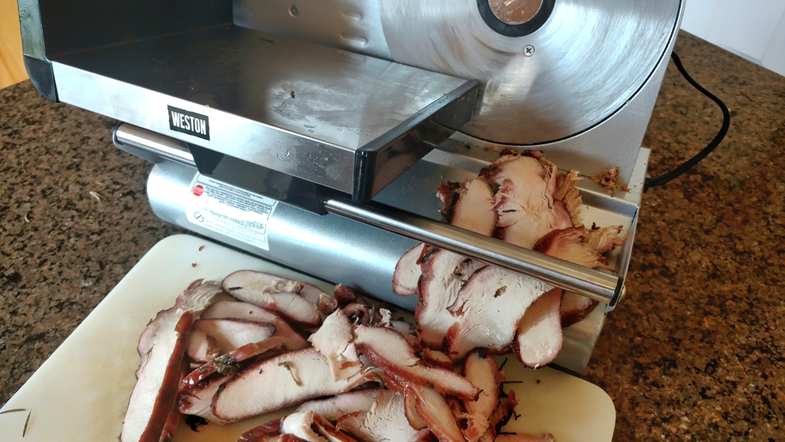 Skip the deli counter and try slicing your own lunch meat, made from wild game. Josh Dahlke
SHARE

If I had to choose one type of store-bought meat that makes me cringe more than any other, it’s packaged deli sandwich meat. It’s liberally processed and often slimy with preservatives…because it has to be. As a general rule, the more a meat is handled after coming off an animal, the more things that need to be done to make it safe. Plus, Carl Buddig and his cohorts know it needs to have a shelf life. It is what it is and it won’t kill you (probably). But if you’re like me and you want to avoid eating the stuff, it’s time to consider making your own. Luckily, it’s pretty easy.

You can make your own sliced deli-style sandwich meat from virtually any game animal that has big enough chunks of meat on its frame. Deer, elk, sheep, bears, and hogs are all doable. Hindquarters of big-game animals are ideal, and wild turkey breasts are also perfect for processing into your own lunchmeat. Smaller birds and game aren’t candidates for this because they don’t hold any cuts large enough to work with.

I’d recommend waiting until you have a solid pile of meat on hand before you decide to delve into this sandwich situation. If you plan it right, you’ll be able to process enough at one time to last you awhile. Bulk processing is also convenient because it saves cleanup time.

There are two primary ways you can prep the meat so it’ll be the right consistency for slicing: use a slow cooker (Dutch oven, crock pot, etc.) or smoker. You want to keep the large pieces of meat intact and moist.

Once the meat has been cooked to a safe temperature, simply remove it from the heat source and let it cool. Then it’s time to slice it. You can use a fillet knife to get the job done, but I’d highly recommend getting a nice meat slicer such as this inexpensive model from Weston. An electric slicer allows you to shave the meat thinner than you can with a knife, plus the slices will be more consistent in thickness. All around, a slicer is easier to use than a knife, it gives you a more professional end product, and you can use it to slice other stuff such as vegetables and cheese.

Once you’ve sliced the meat, divide it into reasonable portions that make sense for you or your family’s typical weekly diet. Based on my experience at home and working in several restaurant kitchens, the meat should easily last 5-7 days in the fridge—even without preservatives—if you keep it consistently cool. Don’t leave it out on the counter for long periods of time and you’ll be good to go.

Regarding storage, you can use Ziploc freezer bags, or even butcher paper if you really want to go cheap, but it’s certainly worth your investment to get a high-quality vacuum sealer. Some of the juices might be sucked out during the vacuum-sealing process, so it won’t hurt to spray a small amount of water or even saltwater onto the meat before stuffing it into the vacuum bags to give you an additional moisture buffer. In cases like this—when you’re trying to retain moisture and you’re dealing with a lot of meat surface area—vacuum sealing is definitely the best way to package and freeze your product.

Next week, I’ll share a recipe for cranberry-herb wild turkey sandwiches. Save your appetite.