After watching the Punkin’ Chunkin’ Championship in 2009, American Chunker team captain, Brian Labrie was determined to create a world... 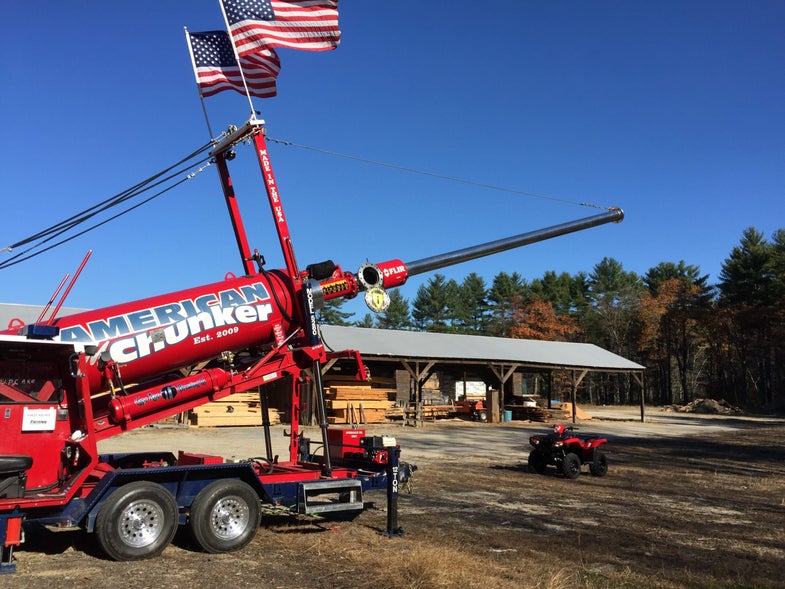 After watching the Punkin’ Chunkin’ Championship in 2009, American Chunker team captain, Brian Labrie was determined to create a world class pumpkin launcher and started to build the machine in another team member’s work garage. Watch as Brian and team give Mark Wills a lesson on the art of pumpkin launching.

Team American Chunker was established in November 2009 by team Captain Brian Labrie, and is based in the Massachusetts area. Their Punkin’ Chunkin’ contraption is an immense 100ft+ pneumatic cannon that competes in the Adult Air class at the Championships. Team AC is comprised of 30 members who have educational backgrounds in Science, Agriculture, Engineering, Fabrication, Construction, Weather Forecasting, Ballistics, Radar and Thermal Imaging just to name a few.

Since the beginning, Team AC has been eyeing the top title at the World Championship, and made some noise during their first few Championships. They placed 2nd, 3rd and 4th for longest shot, and had the best average and cumulative distances during their first three years of competition. Before too long, the team’s tireless work, dedication and practice yielded a championship title and a world record. On November 1, 2013, Team AC found glory when they launched a pumpkin, at supersonic speed, to a record breaking, 4694.68 feet at the 28th Annual WCPCA World Championship.

Punkin Chunkin originated in 1986 when John Ellsworth, Trey Melson, Donald “Doc” Pepper and Bill Thompson heard about a science class at Salisbury State that was throwing pumpkins. The story turned into a discussion as to who could throw a pumpkin the farthest. At the 1986 inaugural chucking the winning throw went 126’. Popularity and participation for Punkin Chunkin has grown steadily since it began with the World Championship at Lewes field in 1986 with four competitors. Nearly thirty years in, the idea of throwing pumpkins has come a long way to include massive catapults, trebuchets, human powered machines, pressurized air cannons and 115 registered teams.

Pumpkins must weigh between 8 – 10 lbs and remain intact until they hit the ground, a pumpkin that explodes in the air is a disheartening phenomenon known as “pumpkin pie”. Per tournament rules, 48 varieties of pumpkins are accepted at the competition and competitors are given three minutes to fire their device, though human powered machines are given an extra two minutes to cock the machine.