Wisconsin’s Brian Lovett is a longtime shameless turkey-hunting addict, but there are several redeeming qualities to his addiction. Chief among... 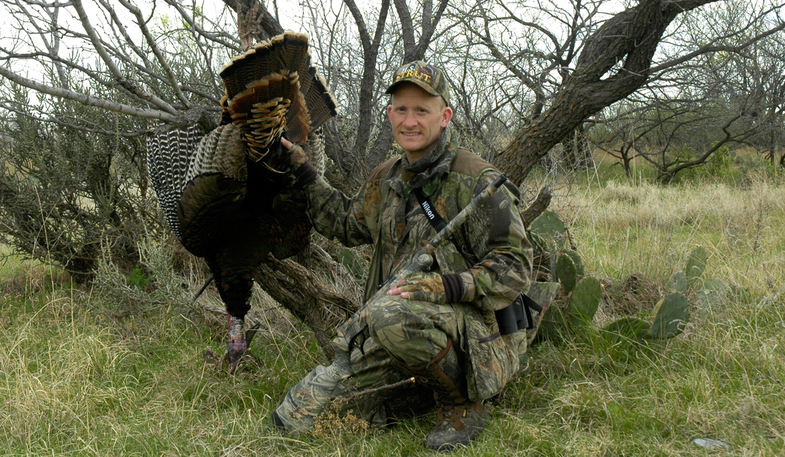 Wisconsin’s Brian Lovett is a longtime shameless turkey-hunting addict, but there are several redeeming qualities to his addiction. Chief among them is a strong drive to share both his passion and accumulated wisdom with aspiring and veteran turkey hunters alike, at every opportunity. He’s ready to “talk turkey” most any time or place.

Lovett, 49, has written several books on the subject including his latest, A Far Green Country, a collection of 11 turkey-hunting essays published this month. Lovett says the book avoids the typical “how-to” scenarios and instead “examines the appeal and mystique of turkey hunting.”

The 11 essays draw from Lovett’s experiences over a wide range of states, and indeed, Lovett has become somewhat of an expert when it comes to maximizing success while traveling the nation—and beyond—in search of his favorite game bird. A meticulous record keeper, Lovett has hunted turkeys for 27 years, during which time he has chased the birds in 20 different states and Mexico, and bagged 136, including several “Grand Slams” of the four major U.S. subspecies (Eastern, Osceola, Rio Grande, and Merriam’s) and a Gould’s turkey in Mexico.

“I’ve even counted my misses,” Lovett says, “but we’ll leave that number to the imagination.”

Through it all, Lovett has amassed several tips for aspiring turkey-crazed travelers hitting the road. Here are his top five:

“The number one tip for any traveling hunter is smart planning in advance of any trip,” he says. “It’s easy to read about chasing Merriam’s turkeys near Devil’s Tower in Wyoming, but once you’re out there, the new and different terrain can intimidate people. Well before a trip I try to talk to state biologists and get an idea of what I might expect; information on bird numbers, preferred habitat. I also like to talk to local hunters, learn what they advise. The season opens in mid-April but is that the best time to go? Also, I try to get all licenses in advance, to make sure everything is legal and ready. If I’m going with an outfitter, I make sure to get references, and especially, for the clients who didn’t score.”

“Tip number two would be sure to remember that turkeys are pretty much turkeys wherever you go. The places they inhabit might change, but by and large they still behave like turkeys. It’s all about keeping an open mind, and learning how you need to adapt your tactics to the unique conditions you might be facing. In my home state of Wisconsin, you’re mostly hopping from small wooded property to small wooded property, where the birds aren’t moving very far over the course of a day. But in Texas, once they fly down they can hit the ground running and might not stop, ranging over a huge area.”

“Tip number three goes back to preparation, you should make sure your calls, guns, and other gear is tuned and ready to go. It’s one thing to go out hunting on your back 40, but if your calls aren’t conditioned, or if you have some type of gear malfunction, you’ll be wasting valuable time. Make sure you’re prepared with the right clothing and boots; I always over-prepare, bringing both heavy clothing and light stuff, to meet most any conditions.”

“Tip number four is to always pattern your gun to determine your effective range. I usually draw a 10-inch circle on a turkey target, and as long as I’m putting 100 pellets in that circle, I’m confident at that range. My favorite shot size, the one I always fall back on, is Heavier Than Lead 6 shot, which equates to a Lead 5 shot. Lead No. 4s will carry more down-range energy, but you will sacrifice some pattern density with those. My favorite turkey gun is a Remington 870 I’ve had for about 16 years, and I also have a Mossberg 835 that has been a great gun for me, but that old 870 is my fall-back.”

“Tip number five is to change your decoy tactics as the season progresses. I always bring and use the most-realistic decoys I can afford, and I will start in early spring using two or three hens, with a jake or a strutter. Usually I will have one feeding hen, and maybe a “looker hen” and a breeder hen, with a jake or strutter behind them. If, for some reason, there’s a really big jake crop, I will leave out the strutter. As the season progresses, I might take the strutter out of there and use just a few hens, and then late in the season, I will use just a single hen. Especially during the late season in Wisconsin and Minnesota, in May, it’s natural for those hens to be out by themselves. I set my decoys about 25 yards away, close enough that if a bird hangs up, you can still take it with an ethical shot, say, 45 yards and in.”

Electronic and print-on-demand copies of A Far Green Country by Brian Lovett are currently available at Amazon, Smashwords, Barnes & Noble, and other web outlets.