“Don’t fool yourself. The bears know you’re there.” That was the first piece of advice Val Popov of Tower Lodge... 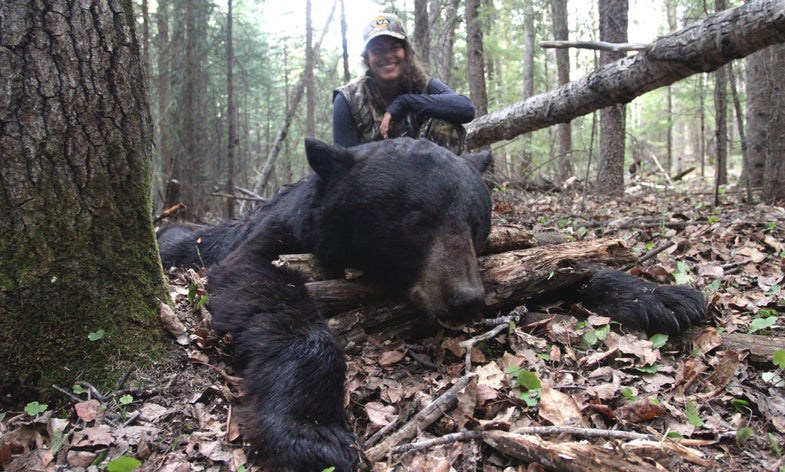 “Don’t fool yourself. The bears know you’re there.”

That was the first piece of advice Val Popov of Tower Lodge Outfitting offered the night before my first sit in central Saskatchewan. I was on a muzzleloader hunt with CVA last month, and I had five days of black bear hunting ahead of me.

The bears didn’t just know I was hanging around the sites: most of them could tell exactly where I was sitting and that I’d had something tasty for lunch. But there were a few pieces of advice I picked up from everyone in camp that, despite my presence at the bait sites, made those bears less likely to spook. Which in turn made my 7-hour sits more entertaining and more productive: I was able to watch a lot of bears, and I took a mature boar at the end of the week.

We’ve already covered five tips for better baiting strategies and nine pieces of gear to bring with you on a black bear hunt this spring. These following three tips should hopefully help your hunt once you’re actually sitting in the stand. 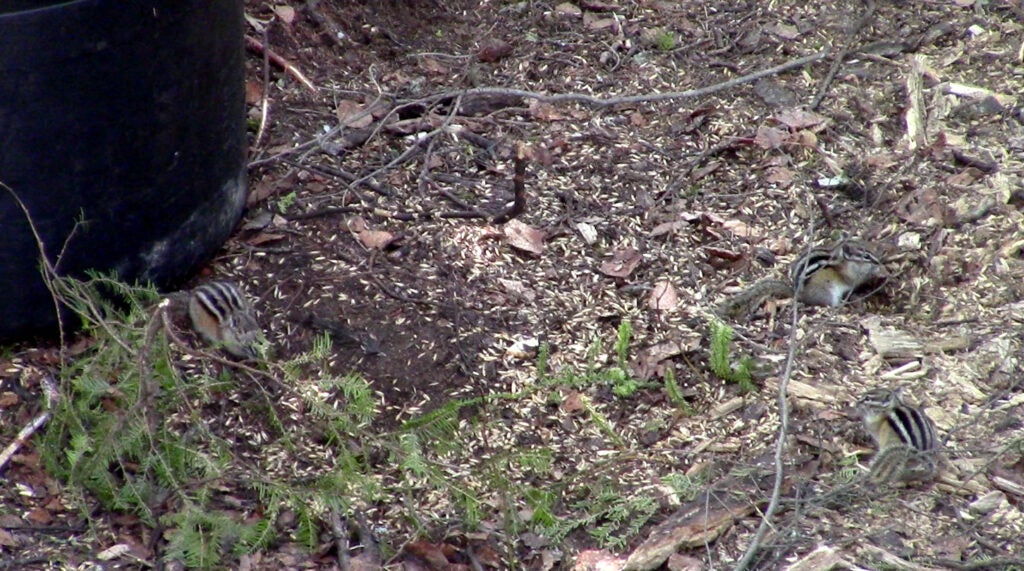 1. Pull a Snow White
Make like a Disney princess and rely on the woodland creatures around you to learn what’s happening in the woods. Watching and listening to them not only keeps you entertained during long stretches in the stand, but the squirrels nibbling at those spilled oats also serve as the perfect watchdogs, alert for incoming bruins.

This tip originated with 13-year-old Wyatt Schearer of Shoot Straight TV, who said he knew his first bear was on the move thanks to a barking squirrel back in the timber. And sure enough, the first evening of my hunt a heavy sow and two yearlings crept in to the barrel. But before they showed up, the birds and rodents made a racket and fled in the opposite direction.

Once the critters leave the scene, pay attention to the silence, too. Even when the trio seemed to have eaten their fill and wandered off, the site remained quiet. Finally, the bears came back for more. They’d just been napping nearby, and even though I couldn’t see from my spot in the tree, the smaller animals definitely knew those bears were still around.

So just because those big bears will pad in silently doesn’t mean you can’t sometimes hear them coming. 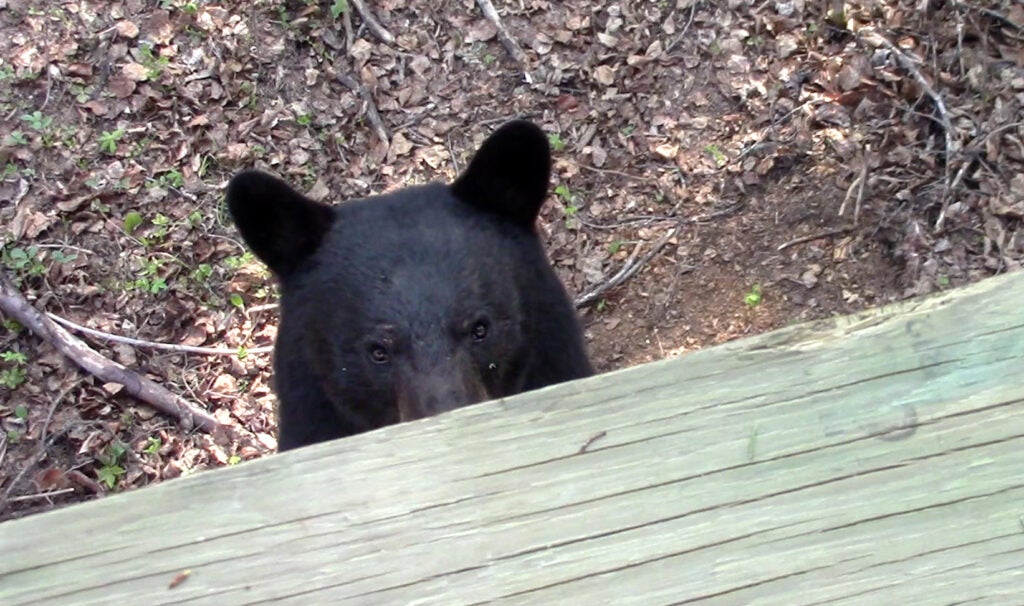 2. Mind the Ears
You don’t have to worry about a bear’s nearsighted eyes too much, and while they have good noses, they’re also entering an area they expect to hold human scent—and sometimes humans. Bears winded me on different occasions, but it didn’t deter them for long.

So instead of going overboard with scent control, just sit still and stay silent—super silent. According Popov, the number one mistake hunters in his camp make—even veteran hunters—is making too much noise in the stand.

We were the first hunters of the season and those bears hadn’t been hunted yet this spring, but the slightest noise—either by other animals or from me—sent that sow and her cubs scampering up the nearest pine. The good news is, as the bears hung around and got comfortable with a site, the more noise and movement they would tolerate. So take as much time as you need to set up perfectly for your shot—just do it without making a sound. 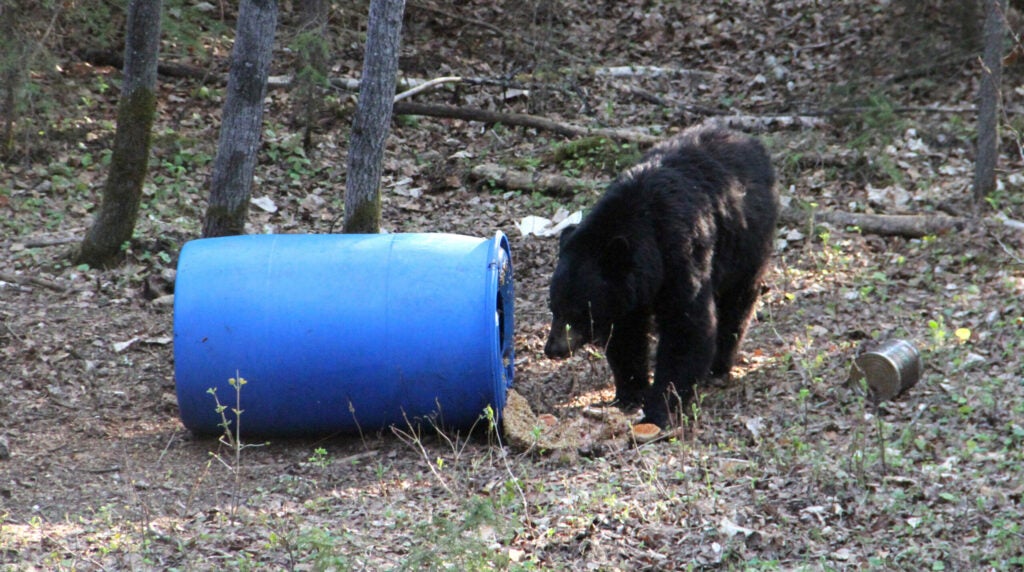 3. Size ‘Em Up
Black bears are known for being difficult to judge in the field. Points of reference can help, including the bait barrel, a limbo pole, and other bears. But what happens when a solo bear strolls in on a trail without a felled limbo pole and walks to a barrel that’s already been tipped?

The most useful indicator for me was actually watching that stride. This was a tip from Wyatt’s dad, Chad Schearer, who put it like this: If you can hear that music, ‘ba-dum ba-dum,’ in your head when he’s walking, that’s a shooter. So if a bruin is plodding along with a lot of side-to-side movement—a swaying sort of swagger—that’s good news. He’s got a lot of extra meat to move around.

Next, I looked at the belly and the legs. Two younger boars came into the bait on my third day, and one’s back was a tall as the barrel—a classic rule of thumb for a shooter bear. But if you stepped back and looked at the body altogether, you got a different impression. His stomach was leaner, mostly horizontal to the ground without any potbelly swell to it, and his legs were thinner too.

So take all those field-judging factors into account when you’re trying to size up a bruin without any reference points, and look at the whole picture.

For more tips and tactics on how to hunt black bears, click here. Got a bear down? Check out our video on how to skin a bear in the field.