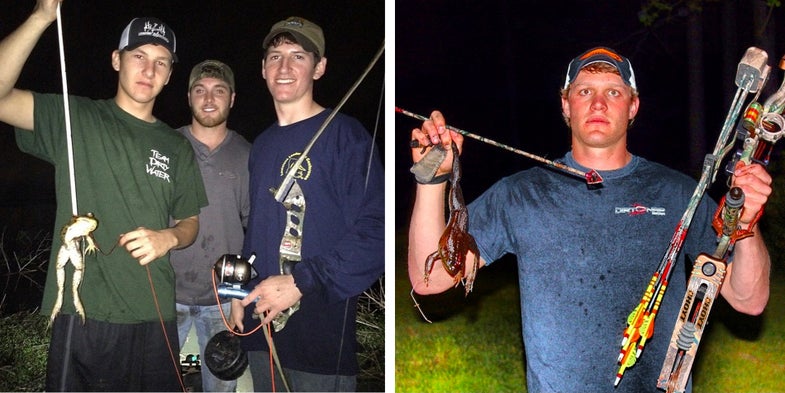 Frogging season is a big deal in the South, though how big depends on where you live. Some states, such as Tennessee, don’t have a designated season. Others do, ranging from around the first of April to the middle of May.

In Kentucky it’s the third week in May (the 16th this year) and it has pretty much been that way since I was a kid. Back then, as frogging season approached, my hunting and fishing buddy and I would plan our strategy for opening night. There were ponds and lakes that were open to anyone, and there were others – usually on farms owned by our relatives – where only we had access. So we would gig the public waters first, trying to get to the best ones before others did and save our private waters for later in the night. Simple as it was, this strategy worked out quite well, and the only thing about it that varied from year to year was the itinerary.

A couple of two-cell flashlights, a gig with metal tines taped or wired to a cane pole, a burlap seed bag or two to hold the frogs, and a pair of cheap “car wash boots,” was the only equipment required. Frogging was inexpensive entertainment and the results were always at least a few dozen delicious froglegs.

As with most any hunting and fishing endeavor that humans get involved with, however, we became so adept at it that we decided we needed to make it more difficult to be worthy of our attention. So we took up bowfrogging.

There are various ways to hunt bullfrogs. Other than gigging, one can catch them on hook and line with a patch of cloth, grab them by hand or shoot them with a .22 hollow-point or with an arrow. Shooting frogs with a .22 is quite sporting, but the problem here is that bullfrogs are seldom willing to admit that they’re dead and will dive reflexively under any available cover before you can get to them.

Some sportsmen grab frogs. Pete Ponds, a friend of mine in Mississippi, told me the other day that he and two others grabbed 72 frogs in a pond that was developed specifically for frogging; that is, it’s only about 3 feet deep and full of weeds and frogs, with a smattering of snakes and alligators. Grabbing involves lying down in the bow of a johnboat while one companion runs the outboard or Go Devil and the other holds a Q-Beam on the water ahead. White eyes belong to frogs, red eyes belong to gators—best be sure you know which before you extend your grabbing hand. Good grabbers working in tandem can work a pond practically without ever having to stop until they get tired or get their limits. Pete and his buddies, who came up three shy of Mississippi’s daily limit of frogs, qualify as experts.

The biggest limiting factor that keeps a lot of froggers from becoming grabbers is that they don’t have a boat, much less a Go Devil. When I was a kid, that was our situation, but we did have bows. In my case, it was a Bear Kodiak recurve, and my compadre had a Ben Pearson of some ancient vintage. We used them to shoot carp, which were plentiful in the sloughs and floodwaters along the Ohio River, and in our fledgling attempts to bowhunt deer. As there were about 20 whitetails in all of western Kentucky then, we shot a lot more fish than deer. 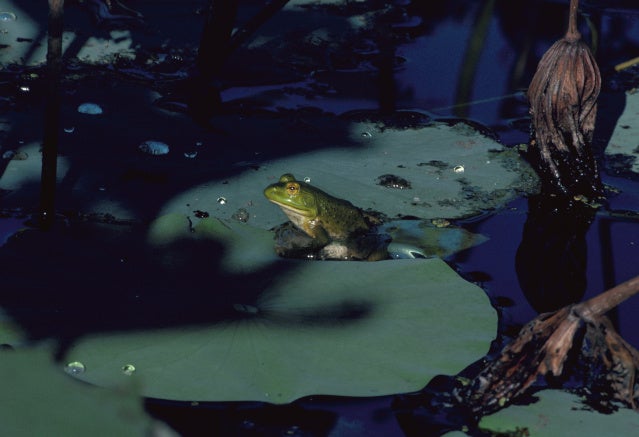 The bowfishing gear was also quite useful for shooting bullfrogs, and allowed us to hunt the frogs in the daylight. To the extent that our equipment allowed, we got fairly good at hitting bullfrogs, too, and I’d like to think that later on the practice of shooting at small objects – in this case a frog’s head – helped us become more accurate bowhunters when our arms got stronger and our archery equipment got better. And deer more plentiful.

I’ve always preferred a recurve for bowfishing because it’s “quicker” than a compound when it comes to snap-shooting. Bowfrogging is different, however, and if you approach stealthily and don’t move suddenly, a bullfrog is more likely to sit there and let you take several seconds to draw a bead on it. In fact, sometimes even in daylight you can walk within gigging distance of a frog and shoot almost straight down at it with a small game point or Judo. Here, a recurve of less than 50-pound draw will work. If the frogs are farther offshore in pads or moss, it’s better to use a fast compound for better penetration. A head such as a Muzzy Carp Point is a better choice for offshore shooting. Whichever type of bow you employ, you’ll need a bow reel and line to retrieve the frog.

Check state regulations for season dates and limits. And don’t take for granted that bowfrogging requires a hunting license in your state. Sometimes, a fishing license is what’s needed.

Bowfishing and bowfrogging give you a break from 3-D targets and help keep you tuned up until autumn. And at least where bullfrogs are concerned, hitting the bull’s-eye provides meat as well as satisfaction.