I may not be able to tell you the exact number of bucks I’ve lured in with the help of... 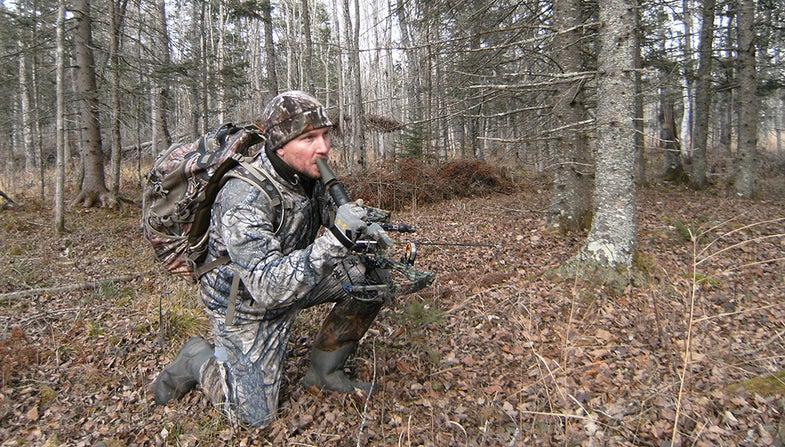 I may not be able to tell you the exact number of bucks I’ve lured in with the help of grunt calls over the years, but I vividly recall the fateful afternoon when I fully realized their near magical, game-changing power.

Fresh out of college and already a rabid bowhunter with several young bucks and does to my credit, I was still looking for my first “wall-hanger” buck when a specimen seriously approaching those dimensions casually entered the small, sign-laden central Wisconsin woodlot where I was waiting. It was early November and I was some 15 feet up a young oak in my prized Lone Wolf climber—back when those stands featured a ¾-inch, marine-plywood platform—and I knew it was time for action. My dilemma was obvious; upon entering the copse of trees the big 8-point had hung an almost instant, hard right. In mere seconds it drifted painfully out of sight. Almost reflexively I grabbed my grunt (as memory serves, a wood-barreled Lohman) and blew a few deep, staccato notes. That was all it took.

A building crescendo of crunching leaves a few heartbeats later announced the barrel-chested buck had fallen for the ruse and reversed course. On he came. I watched, awestruck, as the big deer looped around in front of me, obscured just enough by brush. It finally paused in a hastily trimmed lane just to my right. Distance? A scant 15 yards.

The memory of the encounter is so vivid I still recall holding the trusty Xi compound at full draw—seemingly forever—and then, carefully climbing down, focusing hard, trembling, to examine the blood-stained Easton XX75 2119 aluminum shaft. Yanked from the dirt, I considered its slightly bent, though still intact, broadhead: a wickedly large, three-blade Barrie Rocky Mountain Supreme complete with distinctive red-anodized ferrule—an old favorite. What a moment. Somehow I had managed to convince a mature buck dead set on walking out of my life to abandon its feverish search for hot does—to instead, hunt me. For this reporter, grunt calls would never be the same.

Grunts Above The Rest
Play around with grunt calls enough and you begin to notice a couple things. Chief among them, that some sound a whole lot more realistic than others. In my earlier years I remember blowing through a litany of models, never quite satisfied with the tone. Then came my Eureka! moment. It occurred at the precise time I discovered the now-legendary True Talker grunt by Hunter’s Specialities. When introduced back in 1999, this remarkably consistent, ultra-realistic grunt showed what was truly possible in a deer call, and I guarded mine feverishly. Soon I bought another, just in case… It was love at first grunt, and just as predicted, that call helped me waylay several unsuspecting whitetails. Nevermind that the butt-ugly black-rubber call looked like it had been slapped together using a scrap of old radiator hose and recycled bicycle innertubes. The long, storied run of that model proved my infatuation was shared by many others. I continue to carry one along on many hunts even today.

Over the past several years, many other call makers have devoted considerable time and effort into turning out a wide variety of ultra-realistic grunts, including aforementioned Hunter’s Specialties, which now offers no less than five separate grunt models that include the latest iteration of the original True Talker: the True Talker Legacy. This model continues to produce the winning tone of its predecessors, and I’ve also been impressed by several others. The proven Buck Collector grunt by Flextone is another recent model that made me smile as I worked its charms fresh out of the box; in the field the nearly ideal tone and clarity of sound also has lead to the demise of a few inquisitive bucks. Knight and Hale’s EZ Grunter Xtreme is a rather compact model that has impressed for its ability to produce big, wind-cutting sound; most models tend to wither or quack like crazed ducks when you really work them hard, but not the EZ Grunter.

The Evolution Continues
As someone who considers luring game to point-blank bow range among the most desirable and flat-out-exciting pursuits in all of hunting, I’m in a more or less continual search for the best, premium game calls. Last summer a buddy clued me in to the relatively new Stretchback Grunt by Duel Game Calls, and my first out-of-box notes raised the hackles on my neck. And that’s a very good thing. Inspired, I committed to toting the seriously sweet-sounding call during a long fall of whitetail hunts, spanning four different states.

Last fall the Stretchback elicited consistently positive, if not calming, results when played for does and a few bucks in South Dakota, Wyoming, and Illinois, but the definitive test came in frigid mid-November, in north-central Kansas. That’s when I suddenly found myself watching a 160-class brute skirt the far edge of my creekbottom stand site. And much like the big Wisconsin 8-point so long ago, this buck was almost instantly pointed in the wrong direction. But the freeze-proof Stretchback saved the day. Not only was I able to stop that buck at 90-some yards with a few loud grunts, but slowly, gradually, turn it my way—and this after every bit of the buck’s considerable body language screamed resistance. When the 27-yard shot finally came I couldn’t believe my good fortune.

A Look Into The Future?
You might think I’d be chomping at the bit to get back in the woods this fall with my Stretchback grunt but you’d be only half right. The reason? I’m currently playing around with the Stretchback’s promising new, big brother—Duel’s Stretchback Elite grunt. This ground-breaking call just might be the poster child for the next generation of grunts. Making the Elite unique is its hand-polished acrylic mouthpiece—think high-end, premium waterfowl calls. Duel says this design provides “unmatched call density for the clearest sounds” but I just had to see for myself. What I’ve found so far is incredibly intriguing; the most striking feature of this call, which otherwise is an exact copy of the Stretchback grunt, is that I have yet to blow a bad note. Pick it up and blow hard, soft, or in-between, and the result is a near-perfect-sounding grunt. Dependable tone consistency is maybe the ultimate test of a premium grunt call, and it surely doesn’t hurt that the Stretchback Elite also features a genuine rubber flex tube (designed to create a richer sound) and also borrows the Stretchback’s freeze-proof design. However, you will pay for that finely sculpted premium acrylic mouthpiece. If you’re not an avid waterfowler with a collection of acrylic calls you may be shocked to learn the Stretchback Elite retails for $121.99 (better news is, it’s on sale right now on Duel’s website for $99).

Just One Part Of The System
With all this talk of premium grunt calls it’s easy to think of them as wonder gadgets, but even the very best grunts are simply smart components of a well-rounded, successful bowhunting system. Even the most cutting-edge grunt calls won’t help you pinpoint a productive stand site, they won’t help you play the wind, or use a smart entrance trail—much less tell you to when to draw or help you make an accurate shot. That said, you’ll almost always find me carrying at least two of them, and I like to ensure they feature a noticeably different tone. With two grunts, and maybe a bleat call, I can choose to create a realistic calling scenario of two different bucks on the tail of a hot doe. Another benefit to doubling up? Even if I happen to lose or misplace one grunt, I’ll always have one of my favorite calls handy when I need one.