I’d been exposed to plenty of unique and exciting strategies involving a wide variety of game, but this was definitely... 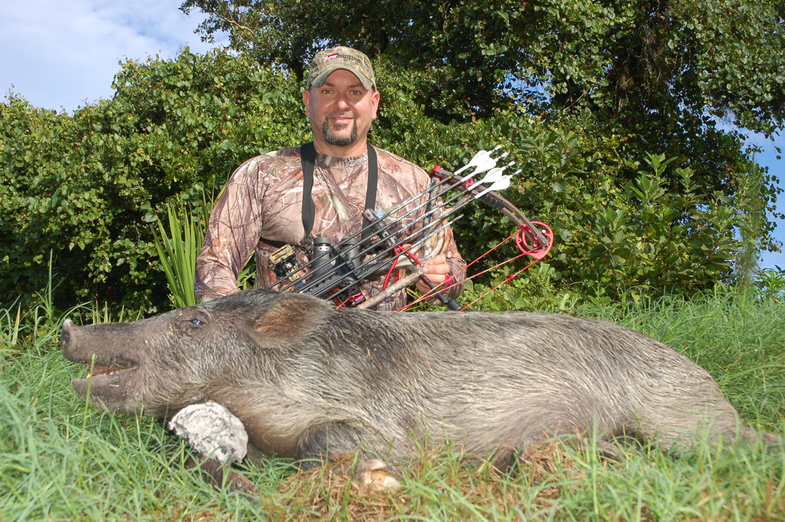 I’d been exposed to plenty of unique and exciting strategies involving a wide variety of game, but this was definitely a new one: sneaking in on a group of feral hogs through 10 inches of standing water as the potbellied gray- and black-haired “tanks” rooted amidst scattered high points dotting the flooded, densely vegetated Florida swampland.

Ten minutes later hog guide Sage Kempfer and I had inched in almost too close, as suddenly evidenced by a shaking palmetto branch—just 3 yards in front of us! What now? We held our ground—and our collective breath—as the shaking suddenly ceased. Brief flashes of the hungry hog signaled it was on the move, looping slowly around through the thick undergrowth to my right. With no signs of the hog sensing us, I looked hard for a clear shot. Two tense minutes later it was time. Crouching into a low squat that greatly improved my shooting lanes, I came to full draw as the gray blob again came into focus only five yards away.

At the shot all hell broke loose. The solid hit triggered a piercing squeal that spooked another, unseen hog right toward me! Following on its heels was the 100-pounder I’d shot. Both veered off a mere three feet in front of me. Two seconds later some familiar staccato huffing signaled Sage to shout “Dead pig!” The double-lunged hog had covered just 10 yards and collapsed.

Off-Season Bowhunting Fun
Can you think of anything better than a wildly successful bowhunt undertaken in the typical “off season” stretch of late spring?

Such was the case recently in hot-as-Hades Florida, where I was among a group with a common goal: field-testing the ultra-thin-diameter Deep Six arrow/broadhead technology—currently available from several companies including Easton, Rage, QAD, Muzzy, NAP, Flying Arrow, and more.

Our eager group of eight waded into the lush palmetto-, mosquito-, and gator-filled swampland of central Florida, armed with Easton’s Deep Six arrows fitted with several different broadheads custom-designed to fit the super-thin shafts. The results were eye-opening. Just over two days later, a total of 14 burly feral hogs had fallen to the unique weaponry. Our conclusion: the thin-diameter arrows produced impressive penetration on some fairly tough-skinned targets.

How tough are Deep Six broadheads and their thin-diameter ferrules? During our hunt, not one broadhead shot at a feral hog broke at the ferrule. And in the case of the three hogs I arrowed, all three arrows not only produced pass-through shots, but in the two one-shot kills, the recovered broadheads were virtually unscathed. With a simple touch-up, they could have been shot again.

Some Eye-Opening Results
Osceola Outfitters owner Hoppy Kempfer knows a lot about the toughness of Florida hogs, and he also was impressed with our results. Over the past 20 years or so Kempfer’s hunters have taken an average of “well over 300 hogs” per year (hunting all 12 months), with plenty of groups shooting a total of 15 hogs. Although many Osceola clients use bows, most use guns of some type, but very few groups, regardless of weapon, approach the shot-to-kill efficiency of our group. Using only Deep Six arrows, our group recovered 88 percent of feral hogs shot (14 of 16 shot hogs recovered).

“That’s phenomenal, actually, that’s really good considering how tough these things are to actually kill,” Kempfer said. “I have a lot of groups come in, and if they shoot 15 hogs, typically there are four to five that are unrecovered; some are mortally wounded and some maybe have survived. They don’t bleed well because of their high fat content, much like a bear, and unless you hit them perfectly you’re going to have problems. And of the two hogs that were wounded [and unrecovered during our hunt], you’ve got to consider that we were hunting in water that was about 8 inches deep. We got just an amazing amount of rain before you guys arrived, and one of the main reasons we couldn’t find those hogs is we couldn’t follow a bloodtrail.

“I do know that after shooting a lot of deer, and 10 times as many hogs, that if the equipment will work for a hog, it will definitely work on a deer.”

One of the downsides of the unique Deep Six technology, of course, is that these arrows can only be used with the slim-ferrule Deep-Six-compatible broadheads, so bowhunters considering making the switch must buy new broadheads as well. Is the technology worth the investment? Our hog experiment results, derived from actual hunting conditions, are certainly encouraging.

What about you? Have you used ultra-thin-diameter arrows on game animals? What has been your own experience with these types of shafts?