Breaking Bad: How to Train Your Dog to Steady on Real Birds

Of the many things I’ve been enlightened about during the dog-training process, steadiness on birds is perhaps the most useful... 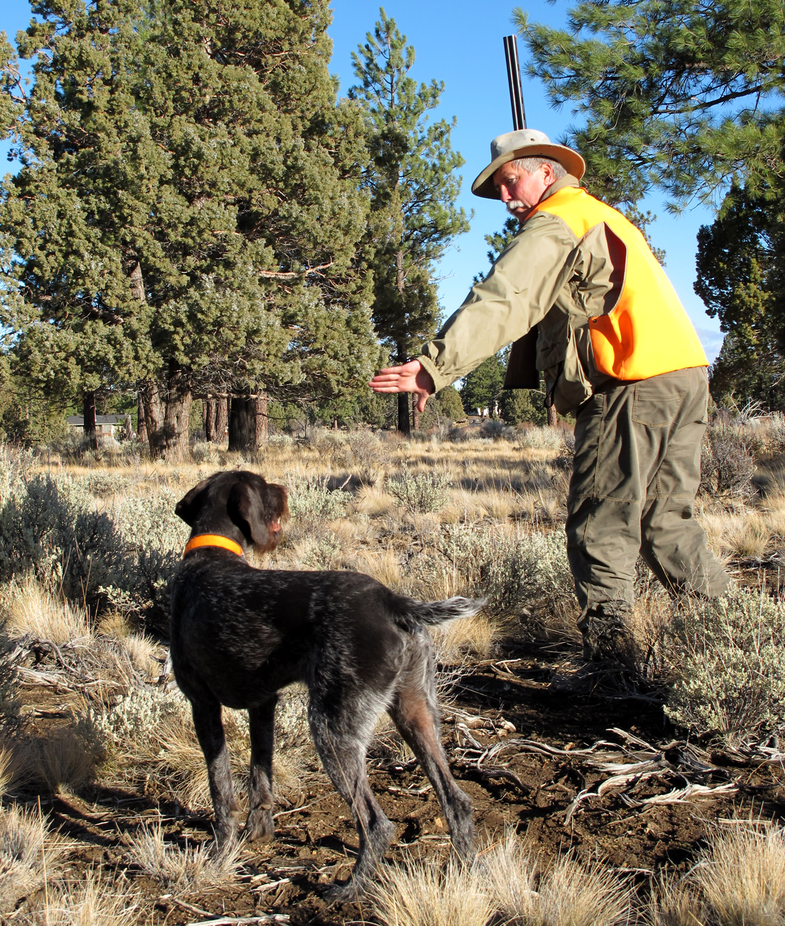 Of the many things I’ve been enlightened about during the dog-training process, steadiness on birds is perhaps the most useful to me.

We have a variety of tools for teaching staunchness: barrel, table, half-hitch, collar, place board, winch, tow truck. All have merit, and are useful training tools. But they can’t be used in the field, let alone a hunt test or trial. Now what?

First, think about the temptation, the challenge, and the geneatic motivators (we call this instinct) your dog has for breaking point. In the wild world, a point is a pause prior to the predator pouncing on prey–watch a coyote working a field for mice. We can stretch the length of that pause in our domesticated dog, but at some point we must overcome his instinct or he will pounce.

You know the process: First, a dog instinctively slams into a tail-stiffening point. That part, we all get. A whiff of bird scent or sight of a bird should produce that instinctive reaction unless you picked your pup out of a cardboard box in a Walmart parking lot. The key is what happens next.

As a judge for the North American Versatile Hunting Dog Association, Bob Farris is asked to evaluate every portion of the point-flush-shot-fall-retrieve process. There are different goals for each, the most important being the separation of instinct (the moment a dog smells the bird and points) from cooperative obedience (when he’s commanded to hold that point).

Bob (and his loyal disciple: me) breaks the sequence into those components:

That’s how they’re judged in a NAVHDA hunt test, because it’s a good way to ensure reliable performance in the field: a dog that’s steady to wing-shot-fall.

My dog Manny (and, I’d bet, all less-than-finished dogs) needs training to stay on point until I want him to 1) see the bird drop, getting ready for the retrieve, or 2) continue to hunt after my release, because I missed … again.

When he enters a scent cone, Manny assumes an elegant point, leg up and forward a bit. But a few moments of staring at the source of enticing smell—a walking, flapping bird or, worse, a flushing bird—will test any dog’s resolve. It’s just natural to chase, so the key is making it clear he’s been ordered to stand still.

Manny is catching on. Now, if only his handler can. Calling on his hunting DNA, he’s learning that a whiff of bird equals point. But he’s also learning that once I’m in the picture giving the whoa command, instinct is out and obedience is in. Eventually, the verbal command will become a hand signal, then simply a “look.” But by then, he’ll understand that a human walking to the bird means the same thing as “whoa,” as does a hand signal, the sound of a flush, boot scuffed on the ground, a gunshot or long whistle: do not move.

This applies to you upland retriever and spaniel guys too, if you want a truly “finished” dog. The only difference is the cue for “hup” or sit, or stand still. Because you expect your dog to move with alacrity toward a bird to elicit a thundering flush, you don’t have the luxury of a leisurely approach to a quivering pointer. But you can use the flush of the bird, your verbal command, classic stag-horn spaniel whistle, even the roar of your 12 gauge, as the “enforcer” of your hup command.

We love our dogs for their instinctive skills and how they share them with us on the hunt. Together, we form a team that is stronger than either individual. You know well there are plenty of times when the dog’s instincts are paramount. But at other times—namely, when a bird is hanging fire—obedience to, and cooperation with the handler must trump DNA.