Chance of a Lifetime: You Could Still Hunt Bighorn Sheep This Season

Frustrated with decades of fruitless application for a bighorn sheep hunting permit? Don’t have tens of thousands of dollars to... 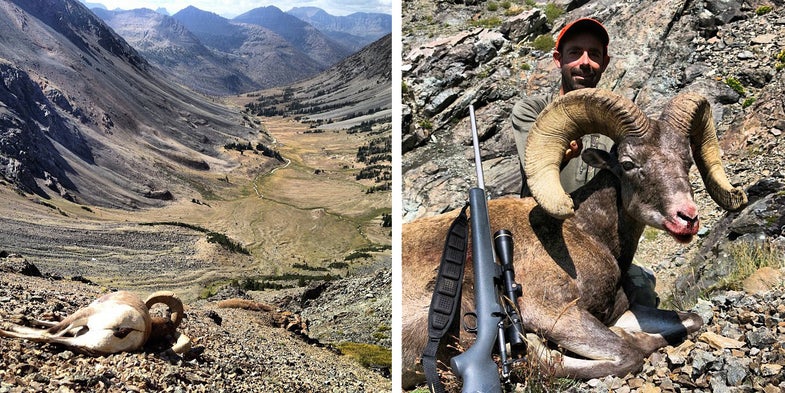 Frustrated with decades of fruitless application for a bighorn sheep hunting permit? Don’t have tens of thousands of dollars to pay a Canadian sheep outfitter? Then head for Montana in August and hunt wild sheep on your own with an over-the-counter tag.

That’s the promise of a radical proposal by Montana Fish, Wildlife & Parks that’s out for public comment through July 2. The catch? It’s a big one. Hunters are being recruited to wipe out the sheep herd in the Tendoy Mountains of southwest Montana before pneumonia does it again.

That means not only are mature rams available, but also ewes and even yearling lambs. The Tendoy herd numbers about 40 sheep, and FWP wants them all to be shot by hunters; any survivors will be killed by agents of the department.

The Tendoys are a small, steep mountain range familiar to travelers on Interstate 15 between Butte, Mont., and Idaho Falls, Idaho. They poke up along the Idaho line just west of the interstate. For enthusiasts of wild sheep, they’re familiar for another reason: they are home to a chronically diseased sheep herd.

The herd has been periodically decimated by pneumonia, possibly transferred to the wild sheep by domestic sheep in the mountain’s foothills. The herd has experienced two catastrophic die-offs over the past 25 years, including a 1999 epidemic that nearly wiped out the herd. Though the Tendoy herd has been augmented periodically since 1999, the population hasn’t grown, probably because disease is being carried by some of the surviving sheep.

The department wants to repopulate the Tendoys with healthy bighorns from another area, but before they can do that, they must remove any reservoirs of disease in the existing herd.

That’s where public hunters come in. The department plans to issue unlimited numbers of over-the-counter sheep tags in the hopes that hunters can do the depopulating work. The emergency season’s structure would be similar to the state’s unlimited bighorn license areas, although a harvest quota would not be established in the Tendoys. The season would last as long as needed to depopulate the herd.

So, now’s your chance to hunt one of the iconic big-game species of the West. You might not have a trophy head to show for the experience, but I’m betting bighorn lamb is pretty tasty.