Bowhunting being the close-range game it is, I’m constantly trying to improve my treestand setups for deadly efficiency. The reason... 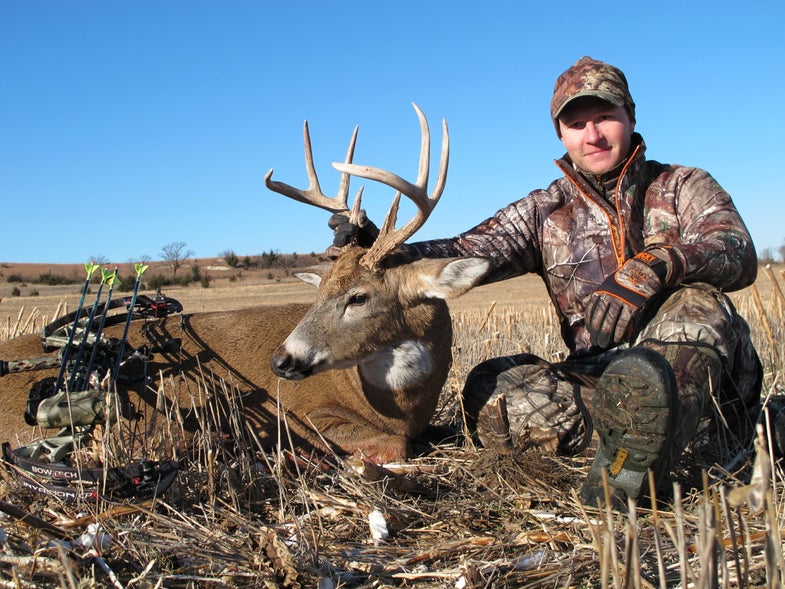 Bowhunting being the close-range game it is, I’m constantly trying to improve my treestand setups for deadly efficiency. The reason is this: Getting close often isn’t enough—it’s simply a good start. Don’t believe me? Think back to all the big deer that have wandered within 20-25 yards of your stand sites. If you’ve tagged every one of them, you’re free to scoff and continue surfing the web. If not, you might want to rethink your approach.

A truly deadly treestand setup lets you do several important things, but the most critical is rather simple: Your chosen vantage point should allow you to spot deer before the deer spot you. If the deer wins that battle, you’ve given up a critical treestand advantage. So is the correct response consistently climbing higher than Average Joe Bowhunter? The short answer is no, because all stand setups are relatively unique—and there are plenty of other variables to consider. Last week we covered four stand setups to avoid. Here’s what to do instead.

1. Take the time to get it right
Before you set your treestand take plenty of time to view the surrounding landscape. Are there nearby, surrounding leafy trees that help hide your outline (good) versus an isolated, bare-trunked tree in a killer spot (worse but still doable). And once you choose your tree and eyeball a potential “looks good” stand height, ask yourself a few questions. Such as, will a couple extra feet higher improve my long-range vision, while simultaneously allowing nice long shooting lanes without unusual interference by the tree canopy—or pesky understory cover? You can typically guess at this answer while eyeballing from ground level, but you won’t know for certain until you’ve actually climbed to stand height.

While hanging from your eyeballed, desired height (achieved with the help of a nice and secure lineman’s belt-type harness), carefully scan the surrounding terrain/vegetation for more clues as to optimum height. Then look again just to make sure. Hopefully you’re not the type who clings to hard-and-fast rules, because in one tree the “cherry setup” height might be 15 feet, while in another it might be 18 feet. In a third case you’re looking at 22 feet. I can think of several instances when moving my stand just a foot or two (up or down) has greatly expanded my available shooting lanes. It’s often a hassle, but choose to ignore details like these and they’ll come back to bite you. Bowhunters must not only be eternal optimists, but extreme opportunists as well. As my high school football coach always said, you’ve got to take every bit of what the defense gives you.

2. Don’t forget the backwards ambush
Typically I like to hang my treestands where surrounding cover offers at least a modicum of extra concealment. If I can get in—or up tight and close to—a large pine sporting just enough of those dense, concealing boughs, I typically feel an extra jolt of confidence in the setup. Still, if you’re truly hunting the sign rather than the perfect tree, it’s likely most of your sets will be in less-than-ideal trees. If this is case, and the problem is lack of cover, there is an answer: Hang your stand on the backside of the tree and use the trunk as cover. Naturally, to make the most of this ploy you’ll have to spend the vast majority of your time standing, which can certainly be a pain, but the payoff could be huge. If you can “stand” the discomfort the deer, very likely, will never know you’re there.

I remember the day I discovered the benefit of a backwards stand. I had a buck approach from directly behind me, yet I made the critical mistake to remain seated rather than stand and turn around. The problem was the narrow oak funnel was strewn with dry, crisp leaves and the buck not only surprised me, but sounded like an escaped elephant approaching; making things worse was the deer was in a pre-rut frenzy, scraping up the woods (at least three in a 100-yard stretch) and jogging quickly between them. Even at first, it sounded a whole lot closer than it was. I made a snap decision to let him pass and arrow him quartering away. Then came still more trouble: the buck eventually stopped directly beneath me to open up a fourth scrape, just to my right.

The problem? I’m a righty. With the buck’s head tilted severely—I still recall that large black eyeball aimed right up at me—I inched up out of my seat ever so slowly, and can still recall lifting my boots oh so cautiously to reposition them as quickly and silently as possible. I’d finally got myself turned and ready—with the Bear Kodiak Magnum recurve at one-quarter draw (so close!) when the buck simply lunged forward, out of my lane. It wasn’t spooked, just finished with another frenzied, haphazard scrape. A slam-dunk opportunity lost because I didn’t stand and face the tree trunk—and oncoming buck. Do I have to mention if I’d instantly stood and faced the trunk the shot would have been in my left-side “wheelhouse?”

From time to time I still have nightmares of that heavy-beamed northwoods brute, his distinctive non-typical rack stained a rich, dark chocolate—hovering there, a mere four steps from the base of my tree. Twelve feet. To add more salt, the same buck came through the very next morning—this time walking steadily straight toward me as I’d planned, heading back to the bedding area I skirted. The trouble this time was that he strolled past five minutes before first shooting light. I could just make out the huge body and distinctive rack as it again passed directly beneath me. This time he passed at a mere two yards. I nearly cried—and never glimpsed that buck again.

3. Prepare for quick shots
Sooner or later, your reaction time will determine the outcome of a close encounter. In most cases, you need to be able to aim, draw, and release before the buck knows you’re there. So give yourself every possible chance of success by positioning your on-stand gear and accessories accordingly. Give yourself every chance for a quick draw by hanging your bow directly in front of you, or slightly off to one side, from a quality bow hanger (I like extra-long models that include three fold-out arms). You want to reduce movement as much as possible, and be able to grip your bow without taking your eyes off an incoming buck. You can’t do that if you’re hanging your bow from those short screw-in hooks designed mostly for packs or other small accessories like a rattling system.

Grunt calls belong around your neck where they can be called into use instantly to turn bucks suddenly heading away from your stand; in addition, I like to tuck mine into my ever-present bino harness. Also, I like to loop my rangefinder tether around my flexible bino harness, and keep the rangefinder in a large, easy-access open coat pocket. With this system, even if I get caught off guard by an approaching buck I can still grab the rangefinder quickly and zap the buck, then simply let the rangefinder dangle harmlessly as I grab my bow and draw. When it comes right down to it, when seconds count and your season hangs in the balance, your bow and accessories had better be arranged to get the job done.