In my book, chasing turkeys and bears with a bow are two of spring’s greatest pleasures. And these days, a... 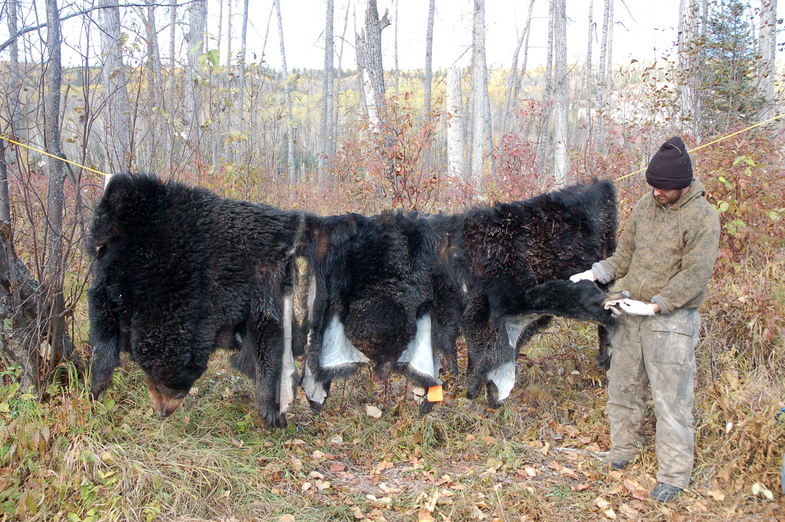 In my book, chasing turkeys and bears with a bow are two of spring’s greatest pleasures. And these days, a good percentage of the country is in easy driving distance of a run-in with a lovesick longbeard. That’s a great thing, but unfortunately, spring bear opportunities are not nearly as numerous—or as easy on the pocketbook. Still, I’d encourage any bowhunter with a taste for adventure to make this exciting hunt sooner rather than later, while targeting my favorite bear location: Northern Alberta.

In my formative bowhunting years I had heard that Alberta was a special springtime bowhunting destination, but once I had spent a few days there with bow in hand, well, I found it a good deal better than that. During a recent trip that had already seen me arrow my largest black bear ever, I should have known the remote stretch of northern Alberta had one or two more surprises up its sleeve. What I didn’t realize, is that it had three.

With a second bear tag still nestled in my pack, an already incredible hunt kicked into a whole new level just a few hours after I’d been dropped off at my riverside “home” for the evening—a solidly built, permanent-style treestand nestled in some tall poplars. It began with a blur of gray motion to my left. The ghost-like form of a large light-colored timber wolf soon materialized, and I watched in awe as the long, lean predator made its way cautiously to my right.

After quickly judging the distance to the wily canine at a solid 50 yards—yes, my daypack also held a wolf tag—I was distracted by a coal-black blob hovering atop the steep river bank, somewhat to the left. A quick casing of the scene was all the hungry black bear needed before it too, committed to the bait station, stalking silently down off the bank some 75 yards away. But before I could witness a rare bear/wolf encounter I was alerted to yet another brush-crackling intruder to my immediate right—and turned to glimpse the approach of a third animal: a beautiful blonde-phase bruin!

Remote Locales Produce Impressive Bears
Several months before the trip, my Alberta outfitter had promised a remote hunt in near-virgin bear territory—areas that very likely had not been hunted for decades—and it was with that tantalizing bit of knowledge that I signed on for the spring adventure.

Actually, my decision was hastened more by the fact I’d hunted whitetails with the outfitter previously, and knew his units were as remote and game-rich as promised. I also knew that even in the isolated Alberta wilds, he would have the gear necessary to get the job done right. And when you’re way back in there, the right gear is critical indeed. There were two jet boats that shuttled us to camp from the float plane, and could propel hunters to remote stands hung up and down the banks of the wide, mostly shallow Athabasca river. For use on land, a fleet of late-model ATVs, complete with trailers, was called into action, just the thing for toting bait, bagged bears, and hunters in style. If things got wet and swampy—much of the land-based terrain away from the river breaks is flat, unstable muskeg—there were two eight-wheeled Argos (ATVs that will actually let you cross open stretches of water, including the occasional beaver pond, if you’re unfamiliar). Incredible stuff.

A Promising Start
Day one of the hunt dawned unusually cool for late May—it would drop to a mere 30 degrees by nightfall—but it didn’t take long to get my hot blood pumping as I approached my stand. Just 20 yards away stood a mature aspen that had been shredded by a big bruin marking its territory. Better yet, the sign was smoking-hot fresh, and, at six feet even myself, I couldn’t come close to reaching as high as Mr. Bruin had. Yowza.

The first evening passed by slowly and not a bear did I glimpse, but two fine specimens had been arrowed by other hunters in camp, fueling the excitement.

Day two saw me back at my stand, eager for my first bear sighting. It wouldn’t take long. About 7 p.m., I glimpsed a bruin walk slowly by, about 70 yards out, but then, nothing. It would be another two hours before the bear, presumably the same one, came stalking in, and put on a show attempting to pull down a beaver carcass suspended above the ground by some thick nylon rope. The suspended beavers that were found at virtually every working bait site served a few purposes, one being to concentrate the bears’ movements for a good clean shot, and two, to judge bear size. Typically, the beavers are hoisted just high enough that only trophy-size, adult bears can reach them, helping hunters with what can otherwise be a tough call.

The obviously hefty bruin managed to rip off the beaver’s tail, and I considered shooting as it paused in range, to taste its favorite meal. But I hesitated. Was the bear—the only one I’d seen in range that night—big enough? Since I had previously bow-bagged a few bears, on this hunt I was holding out for something exceptional. In the end I let it saunter slowly away, then questioned my decision. Minutes later, I was entertained by the appearance of a beautiful, although much smaller, cinnamon sow and her two cubs, and watched them until shooting light faded. That’s when the trio exited as silently as they had appeared.

Day Three Success
The early afternoon of day three found me back at the same stand, where this time the local bruins kept me waiting. It wasn’t until about 9:30 p.m. when my heron-like pose finally paid off, and I caught the wary approach of a lurking black blob. I stood slowly in preparation. Soon, the familiar bulk, complete with the two distinct, white chest blazes I’d noted the day before, positively identified this intruder. This time, I didn’t question its size.

My arrow flew true as the bruin paused broadside, just 10 yards away, and I watched in awe as it sprinted 30 yards before it spun as if to defend its backtrail—then fell slowly backward as if in a drunken stupor. Wow. The explosive speed and power of the bear had taken my breath away, and the deadly performance of the broadhead (a G5 Montec) was just as impressive.

After a long wait I climbed down from my perch to follow the short blood trail but wasn’t prepared for its end. Up close and personal, the bear was immense, sporting a huge, thick head and body that seemed almost neckless. Later, it took three of us to load the brute, estimated at some 450 pounds, on the back of an ATV.

Are you ready to tackle Alberta’s remote, fly-in spring bear hunting? Be prepared for some of biggest, most beautiful stretches of northcountry you’ve ever seen—and thick, heavily muscled black bears every bit as impressive.