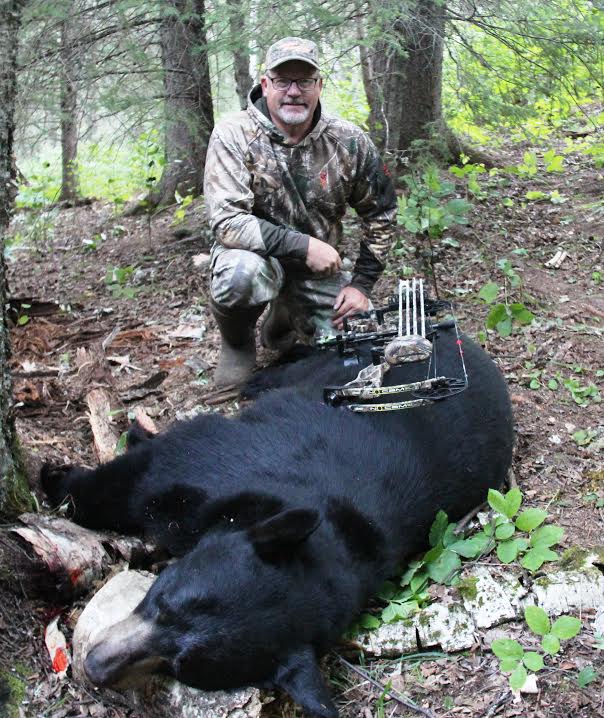 Northern Minnesota’s Bernie Barringer is black-bear-obsessed. Just 75 yards behind the avid outdoorsman’s rural Brainerd-area home, he maintains a bait station where currently, no less than 15 different bears of all sizes have been showing up more or less regularly, at all hours of the day and night. And while Barringer doesn’t hunt these bears, the veteran hunter and author delights in experimenting with baits and chronicling their comings and goings with game cameras, and he’s also learned much about their habits while hunting the smart and stealthy animals across several states and provinces.

During the past 18 years or so, the 57-year-old Barringer has learned that hunting bruins in the late-summer and fall is much different from the spring. So if you’re looking to tag a cagey belly-dragging boar on a do-it-yourself hunt, you’d better know the hows and the whys.

To get a handle on fall black bear strategy I spoke recently with Barringer, who is excited to get back to Ontario in August and complete one of his personal hunting goals: Bow-bagging bears that represent all four primary color phases: black, brown, cinnamon, and blonde. Barringer continues to hunt for his last remaining color phase, a striking blonde, which eluded him in Ontario this past spring despite a few close encounters, and trail camera evidence that showed two separate blondes were in the area.

Mark Melotik: What are some ways fall bear hunting is different from the spring?

Bernie Barringer: The biggest thing with the fall hunt, when you’re hunting over bait, is you have to contend with an abundance of natural foods; out in the woods the bears are eating raspberries, blackberries, acorns, and hazelnuts, so you need high-quality bait to be able to compete with those good natural foods and draw in bears. Also unlike the spring, and almost assuredly related to those abundant natural foods, bears show up at baits with much less consistency in the fall.

MM: What are your best fall baits and why?

BB: I’ve found three that seem to work the best: trail mix made up of cashews, peanuts, dried fruit and some candy, oats-and-honey-based granola, and pastries. The pastries work best for bringing back bears consistently, but you can also have a situation where the bears experience “sugar overload,” and stop coming back. Just like humans I think bears can get to a point where if the food is too rich, they can get their fill. Still, in the fall bears are really loading up on the carbs, they’re trying to build up their fat reserves. But if I have some trouble with pastries I switch to the trail mix and granola, and those two more closely mimic some of the bears’ natural foods.

MM: Let’s talk bait/stand placement. Describe a favorite setup that has proven productive in the fall, and the reasons it works.

BB: My ideal stand setup would be in thick cover, which is really important to the bears; they need to have a corridor of cover to travel through to get to the bait. Bears don’t like moving through open areas in the daylight. I want my baits in thick cover, and as far as a general location, in an area where bears will find the bait quickly. Maybe it’s a ridge between two marshes; an ideal site will also be near water, as bears can consume up to 20,000 calories a day, and they require a lot of water to digest that. Bears also need to cool off, they spend a lot more time in the water than most realize. If your bait is too far from water, it’s less likely that the bears will show up at your bait in daylight. To recap, think thick cover, proximity to water, and a place where bears will be in the area anyway.

MM: How close do you want your treestand to the bait, how high is your stand, and does your ideal setup have any other distinguishing features?

BB: I like to set my bait in a small forest opening, shaped more or less like a light bulb, with the treestand down at the narrow neck. I like lots of cover behind me to help mask my movement, and I like to clear a good-sized area in front of me; if you leave an angled popple limb or a stray sapling, you can rest assured any incoming bear will stop with their vitals right behind it. If you set your stand too close to the bait and too high, you can’t get a double-lung shot. My ideal setups are about 15 feet high and 15 yards from the bait; that seems to give me the perfect angle for a deadly double-lung shot.

MM: What are three pieces of gear you always want to have with you on a fall black bear hunt?

BB: Number one would be a Thermacell [bug-repellant] unit, I absolutely never hunt bears during the spring or fall without a Thermacell. It has absolutely changed bear hunting; before the Thermacell you might have had to wear multiple headnets, and it was so hard to sit still when the bugs were bad. And I’ve never known a bear to be alarmed by the scent of a Thermacell.

I always bring along a “puffy” insulated jacket or something similar that I can stow easily in my pack and throw on quickly in the evening, when it can really cool off fast.

I like a really comfortable stand, because you’ll likely be sitting for many hours; seven hours is a common sit. I like the ‘mesh seat’ hang-ons like those made by Hawk or Millennium; you can really sit back and relax in those.

BB: I really like the Trophy Taker Shuttle T-Lock [fixed head]; I could go into a whole discussion on whether expandables are good or not, but I’m starting to get away from them because their margin for error is thin. Penetration is far more important than a big hole; with black bears it’s much more important to get an exit wound, because of their fat and thick hide, and hair that soaks up so much blood. You can kill a bear without an exit wound but it’s a whole lot tougher to find them.

MM: Does your strategy change when targeting a trophy-class bear?

BB: Anyone who thinks hunting bears over bait is easy, should try to a get a big mature male to come to a bait in daylight, and they’ll see just how hard it is. The less scent you leave at the bait, the better; if you can put enough bait out to there to last for a week, it’s better than baiting more regularly. The bigger bears, they’ll circle the bait on the way in, and they’ll smell your ground scent, and they’ll pattern you. Let’s say you’re normally baiting at noon, and the day you hunt you come in at 5 p.m. When a big boar circles and catches your scent he knows the difference, and that might be enough for him to back off and wait till dark. Before I hunt a stand I’ll make sure to check the wind using my ScoutLook Hunting app, to ensure it’s the right wind for that particular stand. To fool the biggest bears, you’ve got to be scent-conscious in everything you do.

To hear more words of bear wisdom from Barringer, log onto www.Bernieoutdoors.com where you can purchase Barringer’s “How To Bait Big Bears” DVD.