Have you ever dreamed of taking a wild sheep with a bow? Heck, if you’re dreaming, why not go big—how... 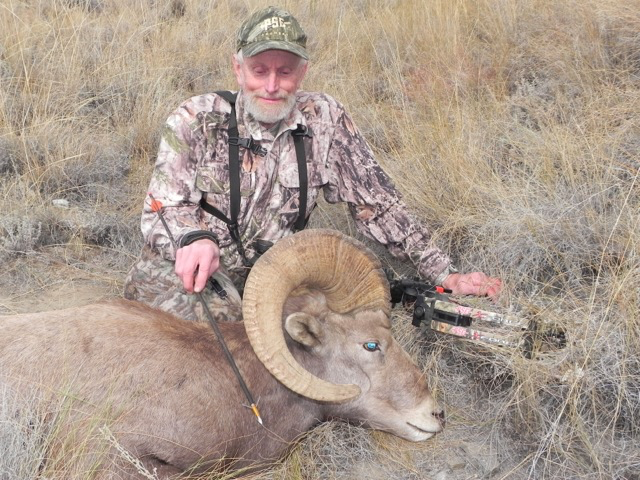 Have you ever dreamed of taking a wild sheep with a bow? Heck, if you’re dreaming, why not go big—how about bow-bagging all four of the North American species, which include Dall and Stone Sheep, Rocky Mountain bighorn and desert bighorn?

Now for a reality check. For most of us, a hunt with an outfitter in Canada or Alaska for any of these beautiful animals can be financially out of reach, considering that guided hunts range from about $15,000 to $50,000. But Alaska and Canadian residents can hunt them on their own, and anyone can get lucky and draw a tag for most of the sheep hunts available in the Lower 48, and hunt solo or with help from friends. So what’s the next step if you get lucky and draw one of these tags? If you’re smart, a whole lot of research.

One wise way to start info-gathering is tapping the knowledge of successful sheep hunters. In order to do that, I looked up one of the best, John “Jack” Frost (pictured above with his 2014 California bighorn taken in British Columbia). If his name rings familiar, it’s because Frost is one the most-accomplished bowhunters in history. Back in 1985 he became the first to bow-bag a Grand Slam of sheep (all four species), and that same year, Frost also arrowed what would turn out to be a new Pope and Young world-record brown bear, a massive bruin that displaced the previous record taken by the legendary Fred Bear. Frost’s bear would hold the number-one spot in the Pope and Young records for 18 years.

Today, at age 70, Frost continues to work as an orthopedic surgeon in Anchorage, Alaska, and still bow hunts extensively in Alaska and abroad. He also recently completed a two-year term as Pope and Young Club Conservation Chairman. To date Frost has taken nine North American sheep with his bow (including two Grand Slams) and he’s also taken a Marco Polo sheep (at 17,000 feet elevation) with his bow in Tajikistan, and has bow-bagged sheep in the mountains of Mongolia and China.

As you might guess, Frost has a few hard-won tips for bagging wild sheep with a bow:

1. Leave Your Rifle At Home

“Once you’ve got your hunt in hand, whether you drew a tag or bought a hunt, the next step, and what I really think is the first step, is fairly simple: If your goal is to take a sheep with a bow, don’t take a rifle. And if you’re on a guided hunt, don’t let your guide take a rifle. Of the dozens, if not hundreds, of sheep hunters who bring both bow and rifle, on about day two of a 10-day hunt, if they see a really big sheep, they end up shooting it with the rifle. So if your goal is to kill a sheep with a bow, leave the rifle home. It sounds basic, but it’s really good advice.”

“When you’re hunting sheep you’ve got to be persistent, and patient. If you get to day four or five, and you’re tired and beaten down, and you’re not seeing sheep and thinking, ‘I just can’t do it, I can’t climb that high again,’—just keep at it. This seems to be a trait of bowhunters in general, but the guys who are persistent—and you don’t have to be in the best shape, or be the best shot—but if you sort of just stick with it, opportunities seem to happen. I think it’s important to remember this.”

3. Wait For A High-Percentage Ambush

“If you get into sheep country and find a nice ram, it’s important not to spook him. It sort of goes back to being persistent. Once you find a good ram you might have to sit back and watch him for a day or two, to see where and how he likes to move around; if you run right up there and spook him, it’s nothing for a sheep to move three to five miles. And if you don’t know which way he runs, you can lose him easily. Spooking a ram may not mean the hunt is over; maybe they are just out of sight over a ridge, and you can hike up there and they’ll be in bow range. Don’t push too hard and make mistakes. You can bump them a little bit, but it’s a ‘feeling’ kind of a thing. If you have a good guide, he has learned how to work around the edges of a sheep’s comfort zone, and get aggressive when he thinks he can. It’s a hard thing to exactly define.”

“As a general rule of stalking, you’re better off to wait until a sheep is in a position where they cannot see you at all, and stalk down on them from above. But on the last day, sometimes you have to be aggressive. Sometimes a sheep is laying up on a mountainside, and he can see everything for 200 to 300 yards in every direction, and you have few options. In these situations it can sometimes work well to get out in plain view, usually on all fours or on your belly—and sometimes wearing whites—and take hours and hours to crawl into range. I’m talking about taking four to six hours to move a couple hundred yards; it’s remarkable how close you can get sometimes. If you’re crawling up on them from below, if they get nervous—they might get up and stare at you—you should just lay down and rest and relax. They might even move off, but once out of sight, you can run up there and they might be only 40 yards away, just over a ridge.”

“I carry my arrows in a hip quiver, it might seem strange at first but it’s something you just have to get used to. Hunting sheep in the mountains, it’s usually windy, and having a whole quiver of arrows on your bow, makes you unstable if the wind is blowing and gusting. Another piece of gear I really like, and didn’t discover until about five years ago, is called Kahtoola Microspikes. They are remarkably durable, they fit over your boots and offer incredible traction, not only on ice and snow, but also on really steep, rocky, gravelly hillsides. Normally if you’re trying to be quiet you’ll step on big smooth rocks, but with these, you can step just about anywhere else, and still have great traction and be relatively quiet.”