How to Clean Blood Out of Predator and Furbearer Pelts

With the onset of winter, it’s officially fur season now, and I hope skinning sheds everywhere are filling up. Whether... 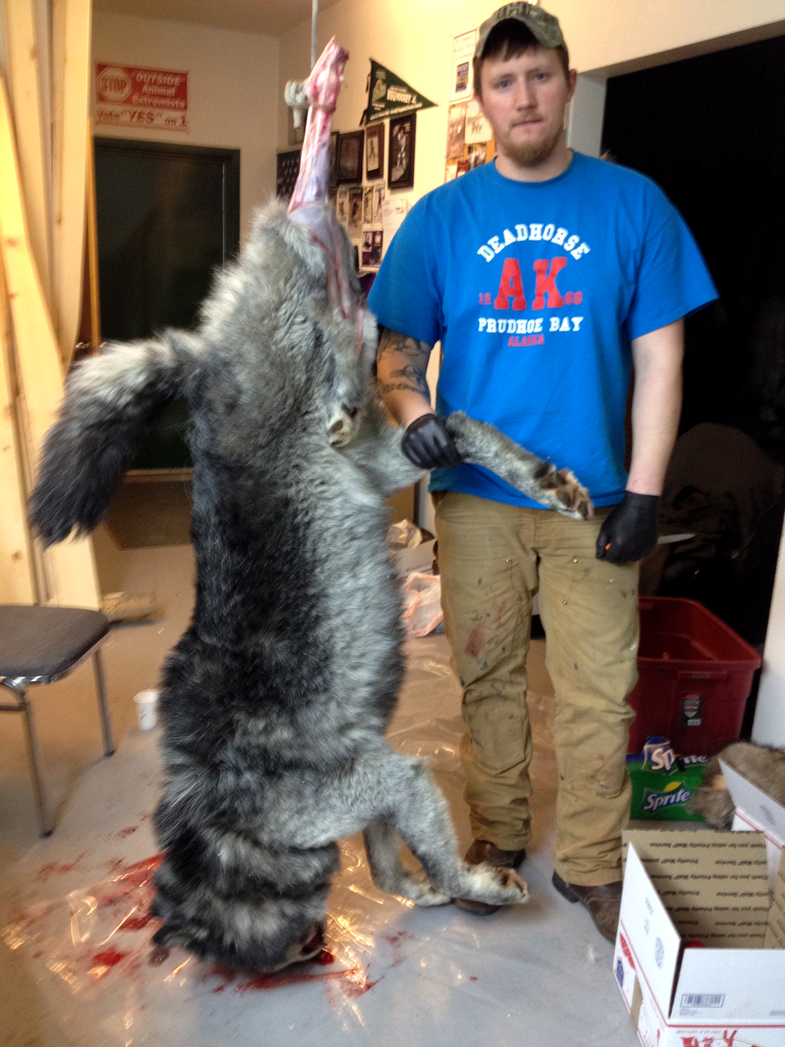 With the onset of winter, it’s officially fur season now, and I hope skinning sheds everywhere are filling up. Whether taken by firearm or trap, we all want our put-up pelts to be the cleanest, most attractive specimens at the fur auctions. But with skinning comes one thing we all have to deal with: blood.

Blood-caked hides are not attractive and will often bring less money because, although the blood doesn’t damage the fur, it can make it impossible to assess the hair quality in affected areas, and the buyer often assume that the hair is damaged. Here are a few ways that you can avoid and clean up blood and produce a more presentable fur.

The best way to end up with a clean fur is to avoid spilling blood in the first place. This is easier for trappers, as they typically either use killing traps or snares that don’t usually result in any bleeding, or they dispatch the animal in a way that reduces bloodiness. However, even trapped hides can get pretty bloody during the skinning process, and there are a few tricks that help minimize it.

One of the best things you can do for animals up to coyote size is to freeze the entire animal solid, then thaw it out before skinning. It’s easier here in Alaska, with subzero temperatures being the norm, but an old chest freezer works well, too. Freezing and then thawing the animal seems to make the blood more viscous, and greatly reduces the amount of bleeding while skinning. It should be noted that you do not want to repeat the freeze-thaw cycle, and you want to skin the animal as soon as it is thawed and the pelt is pliable. This will ensure that the hide isn’t spoiling by the time you take it off.

Even if you freeze them first, there are a couple areas that are prone to bleeding. The arteries in the neck will be full of blood and make a mess when severed. If you’re worried about cutting them, cinch a piece of wire tightly around the base of the neck so that if you do cut them, bleeding will be minimal and you can wipe it away with a rag or paper towel. The other spot is the nose. Most animals will bleed out of the nose while you are skinning them, and it’s pretty frustrating to carefully case-skin a clean fox only to turn him right-side out and discover that the nosebleed got all over the fur. To mitigate this, you can wrap a couple of paper towels around the nose and secure them with wire or masking tape.

How to Remove Fleas from Furbearer Pelts

Even the best of us will get blood on the hide, especially with gun-shot predators. One thing that can help is to pack and try to plug the wound with old paper towels prior to transporting the animal. This often will keep the bleeding to a minimum and reduce the amount you will have to clean later. Also, try to transport the animal with the wound (or the largest wound on a pass-through) facing up. If it’s on the bottom side of the animal, it will allow more blood to exit the carcass. 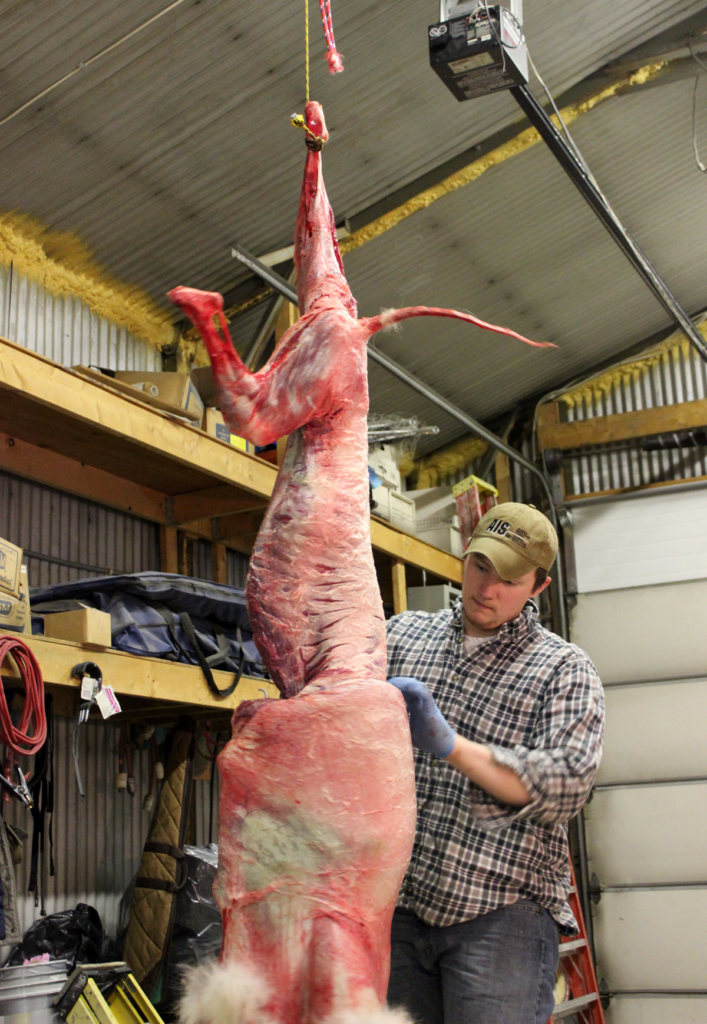 Once the hide is off, and you have blood to clean from the finished pelt, there are a few options to consider. Water with a little laundry detergent works well, but it takes a lot of soaking and wringing to get the blood out. If you have an old washing machine out in the garage (or you have a really tolerant spouse), you can use a tumbler washing machine to get hides sparkling clean. Washing machines with a little detergent are also great for degreasing beaver hides. I am reluctant to use water in all but the worst cases for most furbearers because the hide will be completely soaked, and it takes a lot more attention and care to ensure that they dry out properly. They also look very ratty and take a lot of brushing to regain their loft. 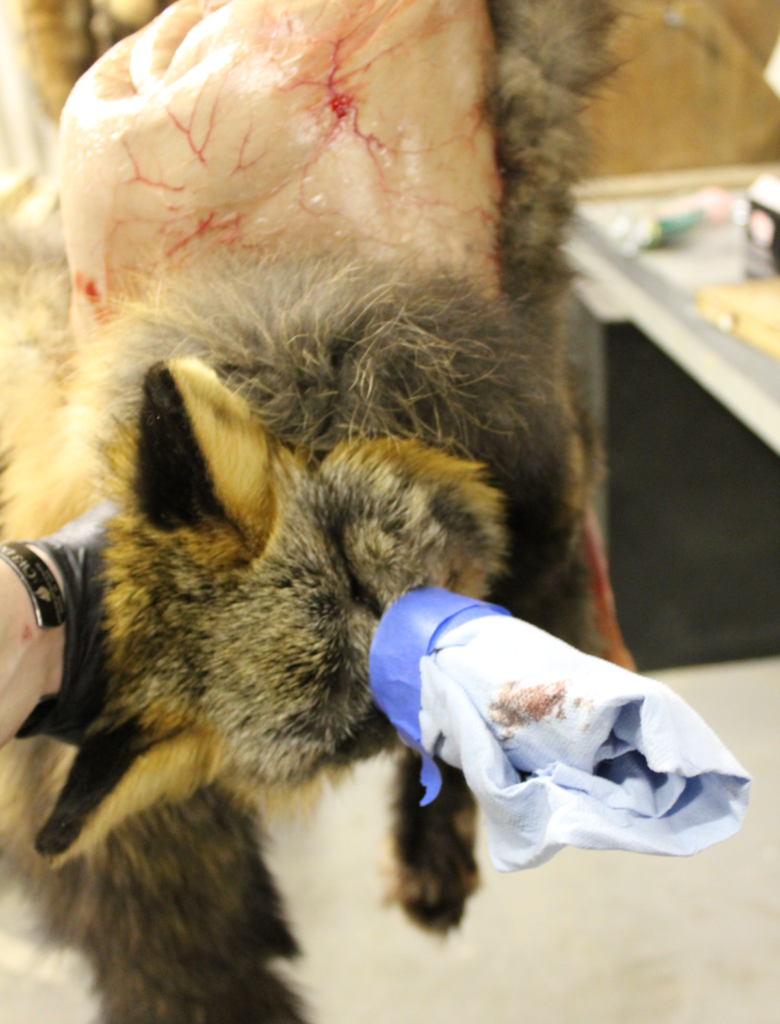 If the preventative steps are taken, blood on the hair will be light and at a minimum, and aside from caked blood, most of it can be allowed to dry, then be gently brushed out with a dog-grooming brush. I know some trappers will dose heavy blood stains with borax while it’s still wet, then brush it out after it dries. The borax helps soak up the blood and brushes out reasonably easy.

What are some of your favorite methods for getting blood out of pelts or preventing it from getting there in the first place?