Bowhunting during the gun deer season? Yes it happens, in some states quite a bit, and some of the diehard... 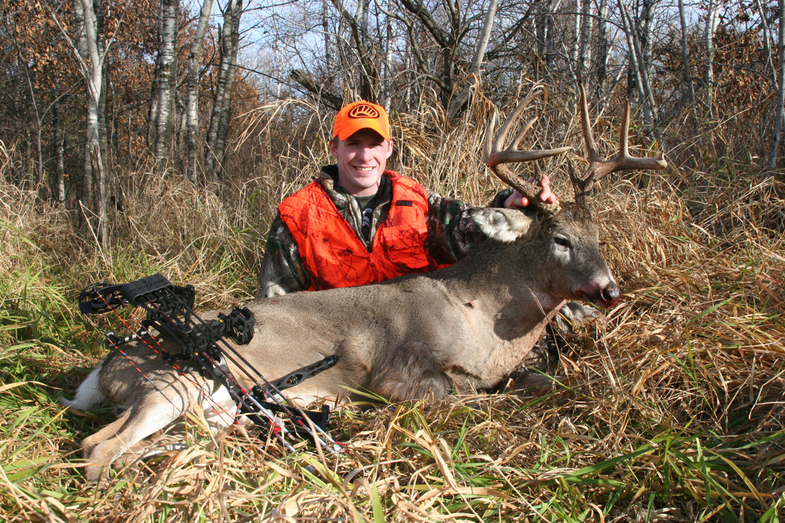 Bowhunting during the gun deer season? Yes it happens, in some states quite a bit, and some of the diehard bowhunters who don blaze orange and hit the woods with their gun-toting brethren wouldn’t have it any other way. By going in stealth mode with archery equipment, they find their footprint is lighter than it might be if they fired a gun, giving them a “shot” at multiple deer.

Two bowhunters who find consistent success during their state’s annual gun season include Mark and Kyle Herr of Minnesota, who specialize in hunting the big bucks of suburban Minneapolis. I’ve shared many of the Herr’s tactics previously (see Suburban Legends), but a point that was somewhat lost in that piece is that most years the Herrs must don blaze orange while attempting to bow-bag their quarry. The Herrs, you may recall, focus almost exclusively on mature bucks—animals 4.5 years and older—and have a large trophy room filled with proof their refined tactics work consistently.

Recently this fall, the pair added to their collection by tagging two more mature metro bucks. Last Saturday, Kyle, 33, tagged out on a 140-class buck that came charging in to a grunt call on a crisp suburban morning. As Kyle tells it, the hunt was fairly typical for a spot that was obviously holding several hot does.

“I heard the buck crashing through brush from the moment I climbed into the stand; I could tell he was about 100 yards north of me, and I could hear him making scrapes on an island in a cattail slough,” Kyle said. “About 10 minutes after legal shooting light, I gave him a grunt, and he came right to my tree—cutting across the slough pretty much on a line. I wanted to wait to call until there was good shooting light, and it worked out perfectly.

“There were deer running all over that morning,” Kyle recalled. “After the shot I waited a good while there on stand; I didn’t want to spook any deer if I could avoid it. I sat there for over an hour, and saw six different bucks and five does. Mine was the biggest buck I saw that day, but we know there are bigger deer around, and my dad hadn’t yet tagged out.”

While the Herrs have permission to hunt several, widely scattered suburban properties, Kyle was wise enough to know the farm on which he’d just scored was smoking hot—and likely holding several hot does. After sharing the intel with his dad Mark, the elder Herr made plans to hunt the same farm.

By early afternoon on Monday, Mark Herr was sitting in the very same stand where Kyle had scored. It’s a spot where three separate fingers of timber come together, forming an intersection in a large cattail swamp. Mark’s hunt would not take long.

“He said he pretty much climbed up into the tree, and the buck came snooping in, checking for does,” Kyle related of Mark’s encounter with an unusual nontypical buck the pair knew well from their months of game-cam surveillance on the property. The Herrs had named the buck “Funky Town” for its twisted, gnarly, left-side antler. “When he came in, my dad told me he thought, ‘Gosh, I can’t pass on Funky Town,’ and then he made a good shot—maybe 20 yards. He hadn’t been on stand more than 15 minutes.” 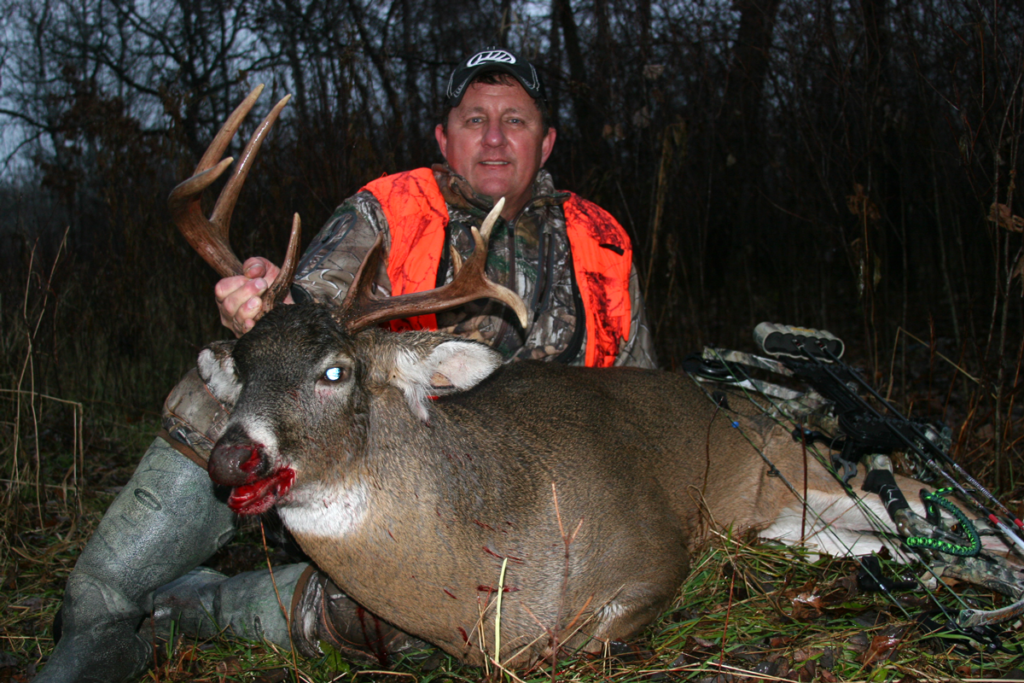 Kyle estimated his dad’s unique deer at 4.5 or 5.5 years old; further examination found an old injury—a softball-sized knot—on the deer’s right back leg, which no doubt forced the left-side antler deformity. Also as a result of the injury, the buck had been dragging its back right hoof, which was worn down severely. Otherwise, the buck appeared to be in good health.

“It’s a very unique, mature deer, not one of the monsters we know the farm holds, but a great deer in most anyone’s book,” Kyle said, explaining that Mark, just a minute or two after arrowing the non-typical, had a run-in with yet another target buck that wandered through, looking for does within 20 yards.

“He was a big nine-point we’ve estimated to be in the high 150s or 160s, but we’re certainly happy with both of our bucks, and we know we have some good seed around for next year,” Kyle said.
Are you ready to try bowhunting during your state’s gun season? Check your local regs, be sure to wear the required blaze orange, then tell us how your exciting hunt unfolded.