Semi-Guided Bowhunts: What to Ask and When to Go

Sooner or later most whitetail bowhunting addicts looking for a new challenge face a dilemma common to our obsession: Should... 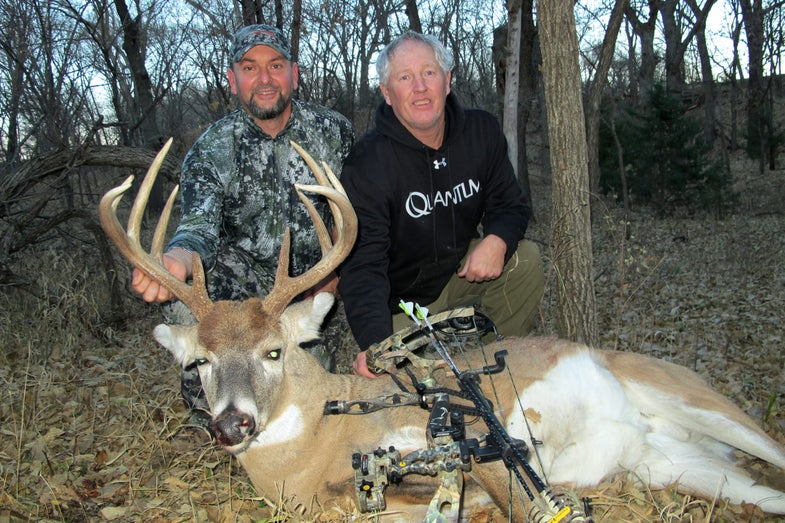 Sooner or later most whitetail bowhunting addicts looking for a new challenge face a dilemma common to our obsession: Should we spring for an out-of-state, guided hunt? And is the cost really worth it? If you’re like many who have misgivings about forking over hard-earned cash to participate in a fully guided deer hunt—especially for a game you’ve played successfully on your own, in your home state, for years—I have a much more-economical answer. Try a “semi-guided” bowhunt.

The definition of a semi-guided hunt may vary slightly from outfitter to outfitter, but generally, we’re talking about a 5- to 7-day hunt that offers you and/or your group exclusive access to a specific tract of private land that’s been tightly managed for trophy quality. Typically, the outfitter will have pre-set a certain number of treestands (or even ground blinds) on the parcel for your use, in demonstrated hotspots, and you’ll be given a map detailing their locations. Also likely, upon your arrival, the outfitter (or one of his guides) will accompany you to the land and physically show you the existing stands, where to park, and offer insight into the general, time-honored, game movement patterns, and smartest stand-access routes. After that, you’re pretty much on your own.

After your initial meeting with the outfitter, it will be up to you to get yourself to and from the land each day, and you alone will determine how long and hard you will hunt each day. Some semi-guided hunts include lodging, or both lodging and meals (a sweet bonus if you can find them), others require you to handle these details on your own, tapping a local hotel or campground, and restaurants, or bringing your own food to prepare.

If this description of a typical semi-guided hunt format has piqued your interest, here’s the best part: going semi-guided can save you big bucks over a fully guided hunt. How much? Some brief Internet research shows you can typically save anywhere from 35 to 50 percent, depending on the hunt time frame. A typical fully guided, prime-time whitetail rut bowhunt might run you in the $3,000-$3,500 range, while a semi-guided hunt for the same prime period might run in the $2,000-$2,500 neighborhood. That’s a big difference, and certainly, even bigger if the semi-guided option includes lodging, or both lodging and meals, which can easily add several hundred (and a whole lot more hassles) to your do-it-yourself costs. The largest bargains usually come during the lightly hunted late seasons.

Of course, not everyone is a semi-guided hunt candidate. Ideal semi-guided clients include:

A. Veteran hunters who are comfortable reading topo map features and deciphering their likely hotspots, and can quickly “get a feel” for game movement on unfamiliar properties.

B. Hunters who are comfortable toting and hanging their own stands quickly, efficiently, and silently.

C. Self-motivated, adventurous individuals who are able to enjoy and immerse themselves in the entire hunt experience—regardless of whether they score or not—secure in the knowledge they’ve tasted something new and had a hand in determining their own success.

QUESTIONS YOU SHOULD ASK THE OUTFITTER

How much hunting pressure will my tract see before my arrival?
This is a tough one. The best (and somewhat unrealistic), answer is, “You will be the first to hunt it all fall.” That said, every other scenario is a bit less ideal, and only you can decide the answers you will accept. Personally, I would like to hear that my property will have been rested at least a week before my arrival, but during the rut a prime property will likely see many different bucks cruising through, somewhat nullifying earlier pressure.

Can I bring some of my own stands and/or blinds to set?
The only answer should be “yes.” The ability to set a new stand in response to a hot movement pattern (and hopefully one you’ve glimpsed with your own eyes) is the very essence of a semi-guided hunt. I recommend bringing two hang-on stands complete with climbing systems (sticks or similar) and one ground blind/chair combo. Other “can’t forget” gear includes quality, telescoping pole and hand saws, a quality pruner, and large supply of “Bright Eyes” or other reflective trail markers that can help you access stands set in unfamiliar terrain in darkness. Also, don’t forget a full-size decoy (a buck model that can also double as a doe), and a full selection of calls that includes a rattling system and a few different bleats and grunts.

Will I have help tracking and recovering my deer?
I can’t imagine why an outfitter would not want to have a staff member available to help with what can be a difficult, physically demanding task. It’s also one that will likely occur under the cover of darkness when those unfamiliar with property lines can easily get turned around. Be sure to obtain staff cell numbers and remember to save them in your phone. Also, packing one of the newer, compact, solar phone chargers is smart and will let you charge your phone on stand.

To my mind, the absolute best time to go on a semi-guided whitetail hunt is during the peak of your chosen state’s rut. At this time, not only are local bucks making the most “mistakes” as it relates to their sensitivity to scent and hunting pressure, but there are also larger numbers of mature deer cruising through the best tracts in search of hot does, with much activity at midday. Hunting at this time can be so visual is the primary reason why setting your own stands can be so effective.

A “second-best” time period would be during the late season (when you can sometimes find some real semi-guided bargains), but only if your chosen outfitter has tracts that contain primary late-season food sources. The food can really concentrate local deer and especially, some of the area’s biggest, cagiest bucks. Again, food sources are the key—as is your ability to withstand sometimes-brutal winter conditions. Snow cover can help determine deer movement and set effective stand sites, but be forewarned: This hunt calls to the bold.

Some of the toughest semi-guided hunt conditions can occur during the early season, when bucks are likely hitting area ag fields hard during the late evening, but are typically bedded before first shooting light in the morning. That’s a tough scenario most anywhere. To my mind, this period is best hunted with a fully guided, or hardcore do-it-yourself approach, when plenty of pre-hunt scouting can help get you on deer you might not otherwise encounter.

Have you been inspired to go semi-guided? Even if you’ve never considered the thought, it pays to be prepared and do some preliminary research now. After all, whitetail addicts who might score early in their home state might just find themselves with some vacation time left to burn—and a neighboring state ready to help continue the obsession.