A Tale from an Alaskan Sheep Hunt: Chasing Houdini

This particular Dall sheep surely wasn’t the first sheep or other trophy animal to be dubbed “Houdini,” but he was... 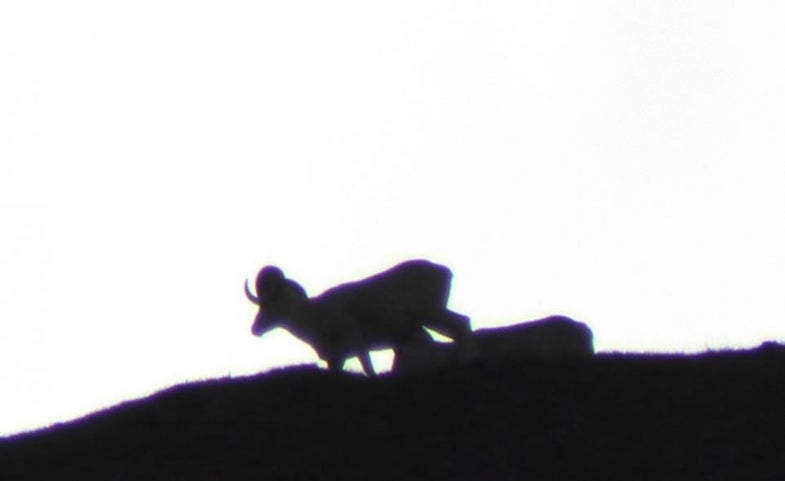 This particular Dall sheep surely wasn’t the first sheep or other trophy animal to be dubbed “Houdini,” but he was Houdini to us. Often the most interesting stories are of the ones that got away, and this isn’t much different. My hunting partners and I came as close as a trigger pull from taking him, but he always managed to slip away.

Our first confirmed sighting of Houdini was in 2010. I say “our” because it was really my buddies Steve and Gary who first saw him. I had already taken a ram in the Alaska Range that year, so I wasn’t along. When I picked them up from their plane ride out of the mountains, the first thing that I saw was the massive set of horns that Gary pulled out of the plane. His ram was a beauty, a deep-curling 40-incher with 14 ¼” bases. As with any good story, there is a twist.

Over our annual celebratory dinner, Steve and Gary told me the story of how they first encountered a sheep that would give us fits for three more years. They were packing in from the drop-off point, heading towards a particular drainage. Before they got there, they saw a ram booking across a different creek bottom. He was dubbed the “Snitch Ram” because after seeing him, they investigated further. The ram led them to what turned out to be a honey hole. While climbing up to get a closer look at the many rams that were scattered throughout the basin, two rams popped out within rifle range. It was the first day they could legally hunt after being flown in, so Steve was surprised that Gary wanted to take one of the rams. They appeared to be both very average, barely full-curl rams, and nearly identical. Gary pulled the trigger and they let the other gradually fade away into the mountains. When they reached Gary’s ram they realized that it was proportionally a very big-bodied and big-horned ram, although average looking without a reference. The 40-incher that escaped? Houdini.

In 2011, I accompanied them back into the area, and we had no shortage of rams to look at. While staying busy glassing and evaluating our options, two rams popped out about a mile up the mountain behind our camp. One was a well over full-curl, a beauty, and the other was Houdini. We weren’t sure at first, but the dark spot on the back of one of his horns gave him away. Although he still looked like an average full-curl ram by himself, there was no comparison between him and the smaller ram. He was twice the body size, and his horns much more massive. We kept looking, but we weren’t lucky enough to see him again that year.

The next year, in August of 2012, I was presented with as close a chance as I could reasonably ask for. Gary had taken a nice broomed ram a couple days before, and the three of us were running a ridge top to check out the basins on the back side. We spotted two rams about 3 miles away, in a drainage running off of the ridge we were on. It was an average, legal-looking ram accompanied by a half-curl. After looking him over carefully, I realized it was Houdini again. We were in a good position, so we made a stalk, and crawled over the nearest outcropping a little under 400 yards from the bedded rams. Technically speaking, it was an easy shot. I had a rock-solid rest, accurate range, and no wind. However, Houdini was bedded in a way that his left horn covered his chest from my vantage point. With my finger on the trigger, I told Steve to show himself to get the ram to stand up. Almost always, when a bedded sheep sees you from that distance, they will stand up and look at you, evaluating the threat. That sheep jumped up and took off up the mountain like his butt was on fire. No shots were fired, and he got away clean. I was bluntly reminded that patience pays off and pushing it often doesn’t.

Steve, Gary, our friend Tim, and I again returned in 2013 with hopes of one of us getting to ground-check old Houdini. The weather was terrible, and it turned out to be the longest, coldest, wettest sheep hunt I’ve ever been on. It was aggravating, as the rain, snow, and fog were constantly screwing up our stalks. While Tim and I were hunting one area, and Gary was packing out a ram he had killed, Steve was hunting near where I had the “almost” encounter the year before. Sure enough, Steve spotted him and was forced to watch him down low, all day, at 600 yards. Because of all the rain, the river was too high to get across, so there was nothing he could do but watch. At that time, Houdini had grown to around 42” and was as deep and massive as ever.

Several days later, after linking up with Steve, he, Tim, and I went up after a band of rams that had two dandies. It was the twelfth day and the last evening we would be able to hunt and get back to the pickup spot in time. While we were beginning the stalk, through the falling snow, we saw three sheep about 2 miles farther up the drainage. One look through the spotting scope, and I immediately knew it was him. I didn’t even give the other two a look, but left Tim and Steve to their stalk and took off on my own. It took me a couple hours of being out of sight to get into a position where I would be able to shoot, and as I peeked over the ridge, there were only two sheep there. Houdini wasn’t one of them. One of them was a nice ram, however, and with it being the late in the last day, and no way to get around them to look for Houdini, I took the lesser ram. That was to be the last time we would see him. He was probably every bit of 12 years old by then, and I’m sure his bones are lying in a rock pile somewhere in those mountains. Although personally, I would prefer his resting place to be my wall and freezer, we never did get the best of that magnificent animal.