Turkey Hunting 101: Put the Sun at Your Back to Kill a Gobbler

You already know to tuck into the shade when you are calling a wild turkey to your location. The shade... 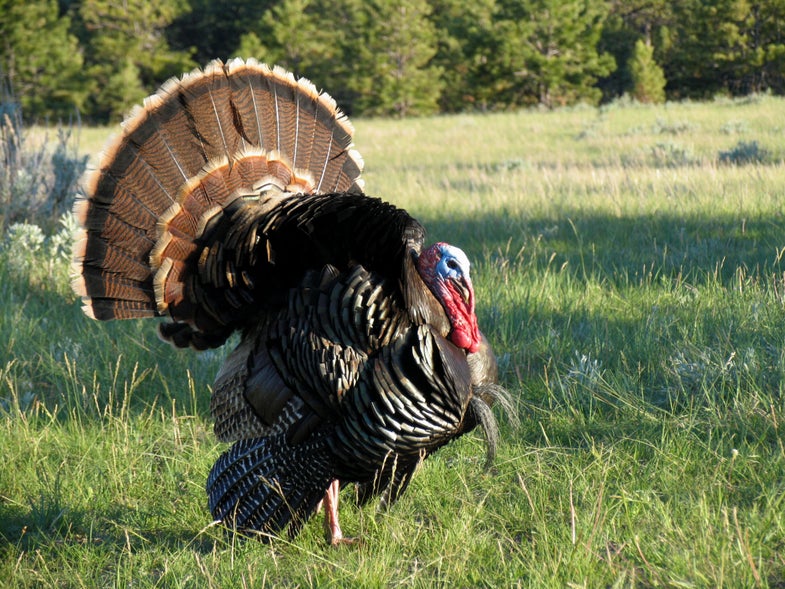 You already know to tuck into the shade when you are calling a wild turkey to your location. The shade helps hide your outline and masks movements that might be spotlighted in direct sun.

But the other reason shading-up works when calling spring gobblers is because when the sun is behind you, it’s shining directly on an incoming bird, and a sunstruck tom is as compelled to strut and display in the open as a school-age ballerina is to pirouette when the music starts.

Don’t believe me? Then spend a sunny day watching turkeys. They pitch down from roost limbs shortly before sunup, but the entire flock generally migrates to a sunny glade or field edge. The demure hens may stick to the shade, but it’s a good bet the toms will find any sunshine available in which to strut and fan. In the middle of a hot, still day, birds may find shade in the middle of the afternoon, but gobblers almost always find a sunny spot in which to display in the last hours of the day.

MORNING SETS: GET EAST OF THE BIRDS
Use that tendency to your advantage when you set up in the mornings. Make sure that birds—either on the roost or in these morning strut zones—are to the west of your set-up, so that you can remain in the shade and the gobblers can keep the sun on their feathers as they approach your call.

If you have a jake or gobbler decoy, set it up facing either southerly or northerly, so that the sun can play on its surface and incoming gobblers will think that a rival is stealing their place in the spotlight.

EVENING STRATEGY: APPROACH FROM THE WEST
Turn this sun-struck strategy around in the evening. Before they fly up for the night, gobblers want to display in the strong light of the late afternoon and evening, and they’ll gravitate to spots that get direct light from the setting sun.

In these cases, you want to approach from the west, with the sun over your shoulder. Why not simply set up a ground blind or tuck into the base of a tree for these evening birds? Because these afternoon strut zones can be hard to predict—they’re typically on the way to roost trees, but that route can change from day to day. So hunting evening birds is often a matter of moving to wherever they are.

I employed this strategy last week in Montana. I had hunted the morning and mid-day without success, but I had a hunch where birds would be roosting, on a high ridge above a well-watered creek.

I circled around the ridge so that I could approach it from the west, and every 100 yards or so, I’d stop and make a series of loud yelps on a long box call. (Paul Butski’s “Morning Wood” call, to be precise – this is one of the best calls at piercing the afternoon breeze on the open prairie.)

After maybe a dozen of these searching calls, I finally got a response, and just as I anticipated, it was from a gobbler strutting on a large west-facing slope. In my experience, evening gobblers aren’t likely to rush into a call; they’re more likely to maintain their position, strutting and looking for the responsive hen.

Knowing that, I called every time I halved what I thought was the distance to the gobbler, and as I closed in, he responded with double and triple gobbles at my yelps.

Getting within shotgun distance was a matter of again using that western sun to my advantage. I stayed on the eastern side of cover, moving in the shade, and when I got underneath the ridge where the gobbler was, I used the terrain to hide my approach.

Finally, I got set up on the shady side of a ponderosa pine, made one final soft yelp, and the gobbler appeared over the lip of the ridge, exactly 39 steps to the east.

The last thing he heard was an alarm putt from my mouth call that compelled him to lift his head. And the last thing he saw was the big golden sun, just setting over my shoulder in the west.

Photo by the author.