Water Was the Key to These 2 Incredible Kansas Rut Hunts

By now most of you are well aware the bitter-cold temps that defined the 2014 whitetail rut (in much of... 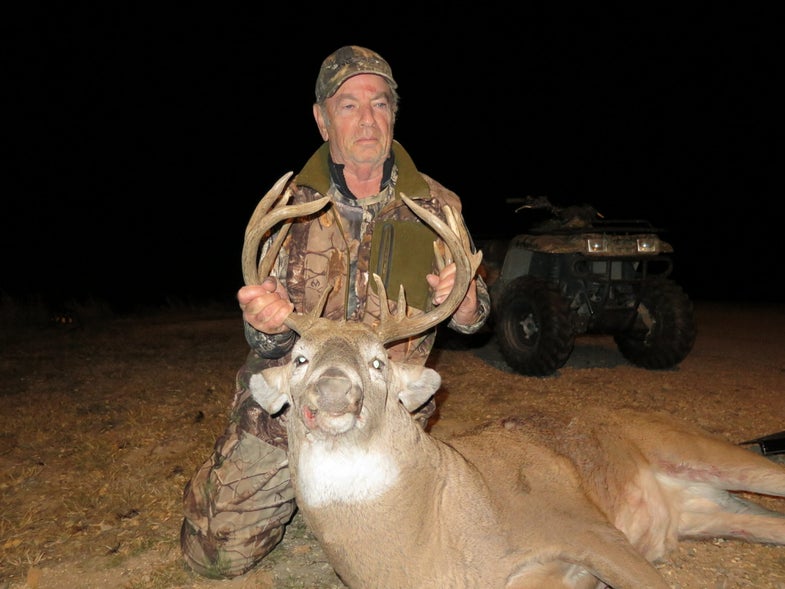 By now most of you are well aware the bitter-cold temps that defined the 2014 whitetail rut (in much of the upper Midwest and many other locales) are largely a memory. The situation has been much different this fall, with overnight temps hovering as much as 30 to 50 degrees warmer. Unfortunately, but unsurprisingly, the deer seem to be reacting accordingly.

This blog is again coming to you straight from hunting camp, this time from Rader Lodge located in north-central Kansas. Despite overnight lows over the past week dipping to no less than about 34 degrees—and even hanging in the 40s and 50s—our camp has posted some impressive success. A total of six deer have been arrowed in the past few days, most of them coming from setups with a glaring similarity: Bucks have been relating heavily to waterways, especially creeks and rivers, no doubt due to the fact that the local does are also hanging close to the life-giving, thirst-quenching liquid.

Easily the best “feel good” story of the week so far comes courtesy of longtime hunter Rudy Sylvaggio. Sylvaggio, 76 years young, has been traveling from Las Vegas to Kansas for the past three years to hunt with Jeff Rader in an attempt to realize one of his life goals: Arrow a representative, bruiser Kansas buck. Sylvaggio (above) did just that Monday evening, after using some of his 50 years of hard-earned hunting savvy to help get the job done.

Sylvaggio climbed into his river-bottom evening stand relatively early, but noticed the tricky winds were swirling and switching, forcing him to rethink his strategy.

“Soon after I got in there the wind switched and was blowing right into the woods, so I knew I had to get out of there,” Sylvaggio said. Once on the ground, Sylvaggio snuck over to the base of a large cottonwood perched atop the steep bank of the river, flowing some 30 feet below him. Beneath the tree’s canopy were three large, fresh scrapes.

Soon, however, Sylvaggio was second-guessing his makeshift ground blind, and got up to look around for another vantage point. Finding nothing better, and with prime time approaching, he returned to the tree’s base. Just then he glimpsed an obviously mature buck enter a large winter wheat field in the distance—more than 250 yards away.

“I knew he was big because I could see his antlers clearly, right from the start,” Sylvaggio said. With nothing to lose, the cagey hunter reached for his grunt call and hit a few loud notes. No reaction. Desperate now, Sylvaggio tried a can-style bleat call. Hearing the quivering whine, the lone buck instantly snapped his head up and stared. Another bleat, and the buck came charging.

“He heard that bleat and started coming straight for me on the run,” Sylvaggio said. In no time, the buck was crossing the river below him—a 37-yard shot that Sylvaggio had ranged previously. The hunter steadied his crossbow and squeezed the trigger.

“After the shot the buck ran right up the bank and to the right, into a small strip of woods,” Sylvaggio said. “The shot felt good but when I walked over there, there was no blood. That had me second-guessing the shot, but then we went only a few more yards and found him. He only made it about 40 yards.”

Still another Kansas giant fell this week along a waterway, this one on a separate Rader Lodge lease many miles to the south. The circumstances of this hunt were as different as the hunters and properties. Monday evening, Wisconsin’s Bruce Thomaeo was sitting in his riverside stand when he heard splashing and soon glimpsed a large buck that appeared to be “bathing” in the river, well out of bow range. For several minutes, the buck simply stood in the middle of the river, in water that reached its neck. An unusual sight, for sure.

With several other large bucks chasing does near his stand that evening, Thomaeo soon lost sight of the large water-loving buck while he concentrated on the others. But as night fell no arrows had been launched from his PSE compound. The next morning would be different.

Shortly after first light Tuesday, from the same stand, Thomaeo heard a vicious buck battle unfold. From the sounds, Thomaeo said, it had been obvious the two battlers were mature bucks, and it wasn’t long before his theory was confirmed. Soon a large buck was limping his way, obviously hurt, and angling right under his stand. After the shot, the buck immediately leapt off a 30-foot bank down into the riverbottom, where Thomaeo was able to shoot the struggling deer twice more. 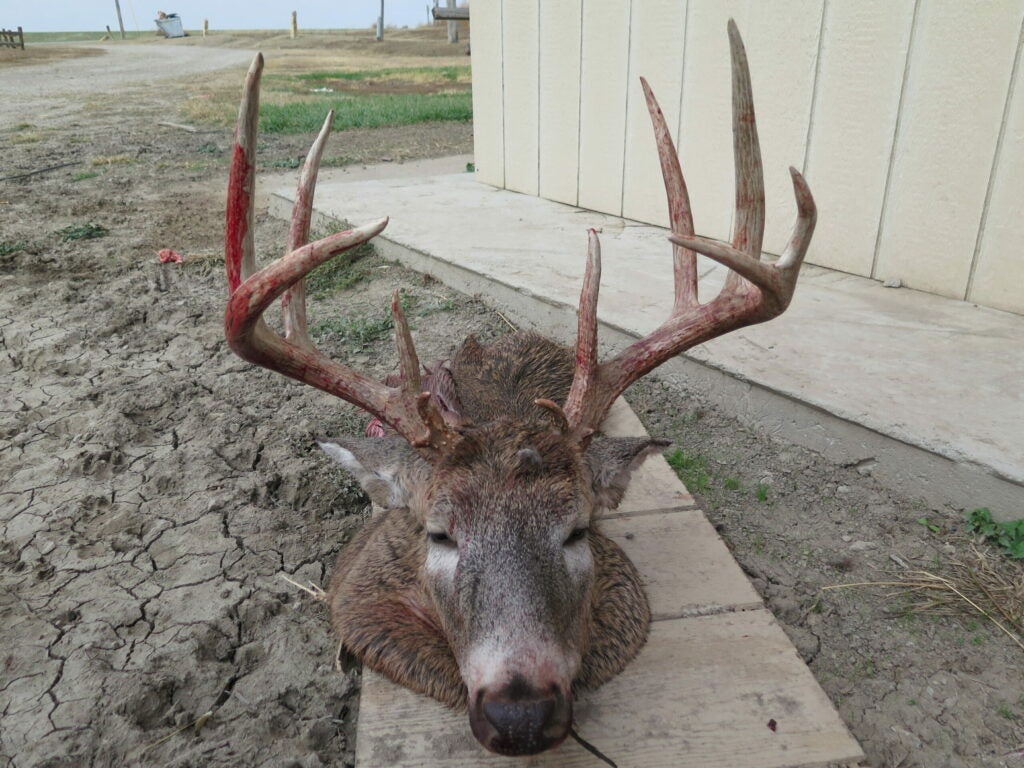 After the deer expired and was dragged back up the bank with help from outfitter Jeff Rader, the two examined the buck to find it had a broken leg—the tell-tale three-blade cut the obvious work of a broadhead.

The two correctly deduced the big 11-point (shown caped here) had been previously shot, and was almost assuredly the buck Thomaeo had seen soaking the wound in the river the previous evening. Later, a call from a neighboring landowner confirmed the deer had been shot in the leg—a non-fatal wound—two days previous.

Ever have an unusual whitetail hunt along a waterway? Let us know if you can top these two.