Some of my all-time favorite bowhunts tend to combine a few key components. Chief among them, predictably, is an unexpected... 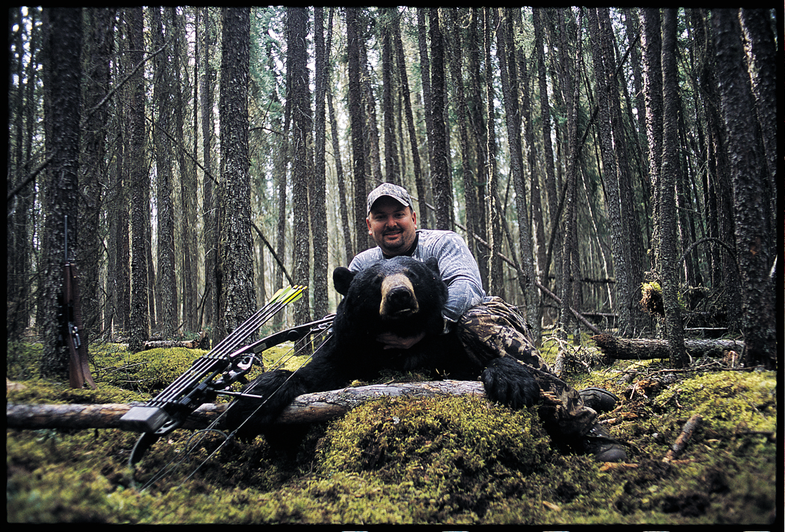 Some of my all-time favorite bowhunts tend to combine a few key components. Chief among them, predictably, is an unexpected encounter with a jaw-dropping trophy. It also doesn’t hurt the memorability factor if, along the way you throw in some type of challenging hardship, or maybe a hint of danger.

One prime example of this scenario is forever etched in my mind: My run-in with a burly northern Saskatchewan black bear that behaved more like a cantankerous mountain grizzly. The encounter reinforced what I’ve heard from several others who have experienced Saskatchewan’s remote, fly-in bear hunting: the bruins in these wilderness regions are consistently less wary of humans—a situation that can lead to displays of outright aggression.

Over the years I’ve found bowhunting bears over bait an exciting endeavor that produces its share of “in your face” encounters—typically in the form of younger, inquisitive bruins that might scale your stand tree a bit to check you out. Some make it all the way up and need some coaxing—a branch, rock, even booted foot—to back them down. After experiencing numerous bear bowhunts during nearly 20 years, I’ve seen encounters more and more. And while I’ve always respected a black bear’s speed and power, I’d never been truly frightened in their presence. That would change one blue-bird June morning in Saskatchewan.

The remote fly-in adventure had begun with a few idyllic days of angling for lake trout and aggressive post-spawn pike that ranged to 25 pounds—the wonderful byproducts of a sprawling, 50-some-mile-long lake dotted with hundreds of islands and shallow bays.

The first and second days saw me and another bowhunter help our native guide bait several lakeside bear stands—using a boat and the pike—and we were back in a wide, shallow bay the third morning to rebait and check for bear activity. After boating a few 10-pounders, things, as they say, escalated quickly.

Sure enough, my 10-power Swarovskis revealed a giant of a black bear ambling our way—and on a steady mission. Although a good quarter-mile distant, it was obvious the bruin was headed for the bait. Time for action. Knowing we hadn’t yet broached the topic of stand dibs, I quickly spoke up as the guide cranked the motor.

“Flip you for it,” I offered to my bowhunting boat mate.

“Go for it man, he’s all yours,” he shot back. Things were looking up; I dearly wanted a chance at that bear.

A minute later we beached and I leapt from the boat, bow in hand, literally running to the hidden, black-spruce-rimmed clearing that held both stand and bait. Once back in there, I couldn’t help but notice the impressive pile of fresh bear dung at the ladder stand base—large enough to have been left by a Clydesdale. Two days earlier there had been neither bear sign nor bait.
I’d barely gotten settled in the creaky little makeshift wood stand when the huge boar emerged from the brush 30 yards out. Immediately, we locked eyes. Then the behemoth promptly sat back on its beefy haunches and pointed its wide nose skyward, slowly waving its bloated pumpkin head back and forth. Checking the wind. A slight breeze on my face signaled my advantage; I relaxed. Wrong move.

With a blood-curdling RRROAR, the huge bear suddenly leapt to its feet and raced straight for me—right to the base of my treestand, pounding the ground with its impressive bulk for even more emphasis. It needed none. The dash took maybe three seconds. Then in one fluid motion, the bear raised up on its hind legs and swiped its massive paws at me—first one, then the other—slashing the air within mere inches of the tiny stand platform. Somewhat in shock—with knees seriously knocking—I simultaneously white-knuckled the tiny tree and my bow, and prayed. Maybe 9 feet up, I was inches from an enraged trophy class black bear weighing some 400 pounds. Conservatively. And let me tell you: Inches away, an angry bear that big is impressive as hell.

Thirty very long seconds later the bruin seemed puzzled. It turned, then simply sat at the tree base. I had no shot—not that it mattered. I hadn’t yet regained full control of my extremities. What next? The bear knew. The hulking brute soon began popping its jaws in agitation—and sprinted hard to my right. What the? Another bear had arrived.

I could only watch as the huge boar bird-dogged around the bait site behind this second bruiser bear, an impressive cubless sow. At one point she grabbed a 12-pound pike from the now-meager bait pile, as a dog would a bone. The boar remained back in the brush. It was mating season; the huge boar hadn’t been haunting the bait for the food. When I finally heard both bears move off for good, I knew I’d been witness to a rare encounter.

In retrospect it’s likely that large boar in that very remote camp had grown up with little, if any, contact with humans, and that the dominant bruin had simply considered me another rival boar doing the unthinkable: monitoring “his” bait site being used by a sow in heat. After all, it was early June, the peak of the local bear rut. Few things spur game animal unpredictability like mating season.

Another explanation? The bears in the most-remote stretches of Saskatchewan are simply a different animal. Buy maybe you’ll need to experience that one for yourself.