Kiwi (a person from New Zealand – not the fruit) Alan Randle won the New Zealand Havelock Fishing Competition this... 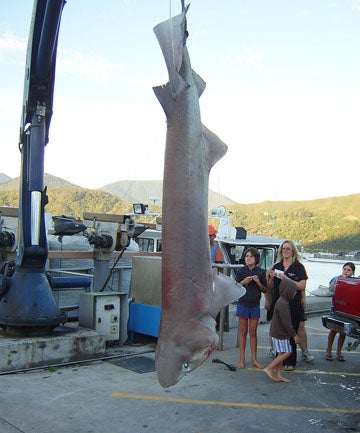 Kiwi (a person from New Zealand – not the fruit) Alan Randle won the New Zealand Havelock Fishing Competition this past week when he successfully battled a 133 kilogram – or in the real world 293 pounds – seven gill shark to his boat.

Randle told New Zealand’s The Marlborough Express that fighting the leviathan put so much strain on his fingers that he feared his “banjo playing days” might be over. If you think Randle’s exaggerating, consider that the shark was so heavy – for fish of that area – that the crane at Picton Harbour broke while weighing it.

Seven gill sharks, also known as sevengill sharks, are opportunistic predators that feed on other sharks, rays, fish and sea mammals. Although they generally hunt alone they are also one of the few species of shark that hunt in packs. In scientific circles a 236-pound seven gill shark is considered the maximum reported weight. Randle’s shark weighed an astounding 57 pounds more than that.

What do you think Outdoor Life readers? Are you impressed by Randle’s gargantuan catch? Or just jealous? Did you know Kiwis played the banjo? Or have you ever given any thought to the musical habits of those living in New Zealand? Comment below!