Kevin VanDam of Kalamazoo, Mich., dominated the 2011 Bassmaster Classic on the Louisiana Delta surrounding New Orleans on Sunday. In... 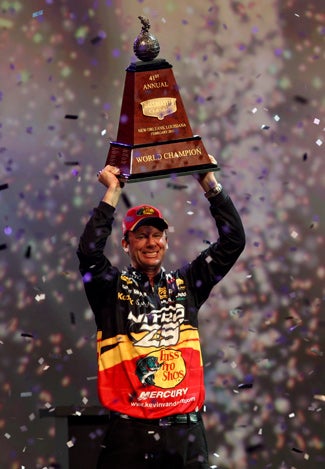 Kevin VanDam of Kalamazoo, Mich., dominated the 2011 Bassmaster Classic on the Louisiana Delta surrounding New Orleans on Sunday. In doing so, VanDam not only picked up $500,000 in cold hard cash, he did so in record-breaking fashion and cemented himself as the greatest bass angler to ever compete.

True to form, and that form is of a true competitor and champion, VanDam got better each day of the pressure-filled tournament. On Day One he weighed in 19-3 pounds of bass, on Day Two 22-8 pounds hit the scales on the final crucial day the lean athlete boated 28 pounds even.

The three-day total of 69 pounds, 11 ounces bested Leeds, Ala., angler Aaron Martens by more than 10 pounds (59 pounds even) and gave KVD his fourth Bassmaster Classic title in the last 10 years (and relegated Martens to his fourth second-place Classic finish). VanDam’s first Classic title came in 2001 on these same Delta waters. Click here for a complete list of final standings.

VanDam, known for his run-and-gun approach to fishing, did what he does best: power fish. Switching from a spinnerbait to a crankbait on Day Two, VanDam fan casted to stumps in the Tank Pond area of Lake Cataouatche and made several casts to successful targets for multiple bites.

In taking the most coveted title in professional bass fishing, VanDam just added to his prestige, legend and pocketbook:

What’s all this mean to you? Well, besides providing you with a good daydream and a ton of knowledge you learn from, if you’re a bass fishing fan it means you’re witnessing the domination of competitive bass fishing by the world’s best angler. One day there might be another angler as good as Kevin VanDam, but that day is a long way off — if it even comes in our lifetime.