In a move that is sure to grate every paddlefish angler the wrong way, Aaron Stone caught the new Oklahoma... 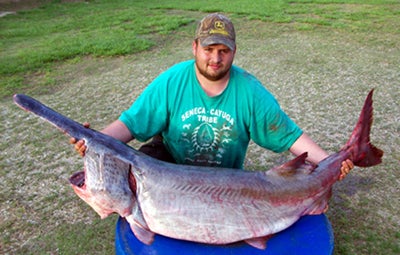 In a move that is sure to grate every paddlefish angler the wrong way, Aaron Stone caught the new Oklahoma state record paddlefish on his second catch.

That’s right, the second paddlefish he ever caught turned out to be the new state record. Why can’t I have that kind of luck? Stone was snagging with his father-in-law on the Arkansas River on April 10 when he hooked into the fish.

Once the fish took off Stone realized he was in for a fight, “…all I could do was hang on. I’ve never felt anything like that before,” he told newsok.com. It took the 21-year-old Stone more than 40 minutes to land the 125-pound 7-ounce fish. The fish was 55 inches long and measured 41.75 inches in girth.

Stone said he was almost pulled in the water several times and at one point actually slid 15 feet down the embankment he was fishing from.

Paddlefish, also known as spoonbills, are filter feeders similar to basking sharks and eat mainly microscopic zooplankton. Because of this they don’t respond to lures and must be snagged to be caught. In addition to being strong fighters, paddlefish are also regarded for their caviar and for their firm white flesh.