It’s what a taxidermists’ dreams are made of. Or maybe it’s what their nightmares are made of – I’m not... 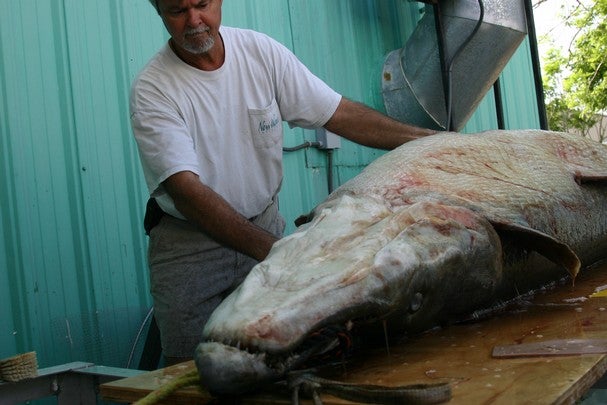 It’s what a taxidermists’ dreams are made of. Or maybe it’s what their nightmares are made of – I’m not sure. All I know is that if I was given the responsibility of mounting what’s believed to be the world’s largest alligator gar ever caught I’d have a panic attack. Fortunately though – for all involved – that duty fell on Buddy Kirkhart, Mike Kirkhart, and Justin Herron, of New Wave Taxidermy, according to tcpalm.com.

The 8.5-foot, 327-pound alligator gar was caught in a net by Kenny Williams in Chotard Lake in Issaquena County in Mississippi on February 14. News of the catch spread quickly and it wasn’t long before the state of Mississippi inquired Williams about the possibility of obtaining the fish for the Mississippi Museum of Natural Science in Jackson.

Williams and the state reached an agreement and the torpedo-sized fish was sent to New Wave Taxidermy on April 26. A full-size fiberglass reproduction is being made for Williams, while a skin mount is being prepared for the Mississippi Museum of Natural Science in Jackson.

Regardless of who gets what, it looks like a nightmare job to me.