B.A.S.S. Bans Use of Alabama Rig in Bassmaster Tournaments

The February issue of Outdoor Life features an article by Alan Clemons that details the creation, marketing, and popularity of... 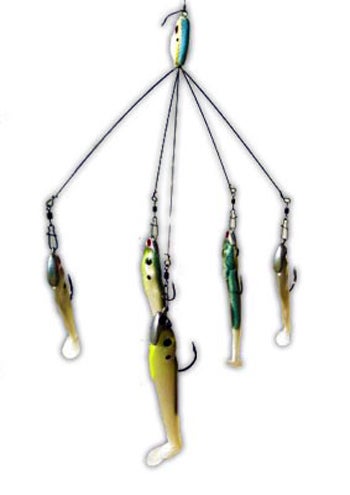 The February issue of Outdoor Life features an article by Alan Clemons that details the creation, marketing, and popularity of the Alabama Rig. Designed by Andy Poss and based on umbrella rigs used for inshore saltwater fishing, the Alabama Rig has already been responsible for several tournament victories, including wins at the FLW Tour Open and the EverStart Championship. Because of this, and given just how well the rig works, many are finding fault with the Alabama Rig. Some going so far as to says it’s unethical. Apparently B.A.S.S agrees – at least as far as tournament use is concerned that is.

B.A.S.S announced this week that it has amended its tournament rules to limit anglers competing in the Bassmaster Classic and Bassmaster Elite Series to the use of a single lure during practice and competition effective February 1st. B.A.S.S. tournament director, Trip Weldon said of the rule change, “The Alabama Rig has become enormously popular in recent months, and it has definitely had an impact on the tournaments in which it has been used.

Personally, I have enjoyed catching bass on umbrella rigs and found them to be very effective in some situations. I have witnessed first-hand the excitement this technique has generated in our sport. However, the Elite Series Rules Committee members unanimously asked to be held to a higher standard. We have decided to honor their recommendation.” An unidentified angler member went so far as to say that using an Alabama Rig takes all the skill out bass fishing. “It doesn’t matter how you work it. The fish can’t help themselves.”

As someone that’s never tried an Alabama Rig I’m intrigued. I wonder if it’s truly that sure fire of a lure. Anyone out there have an experience to share? A thought on the ruling? Comment below