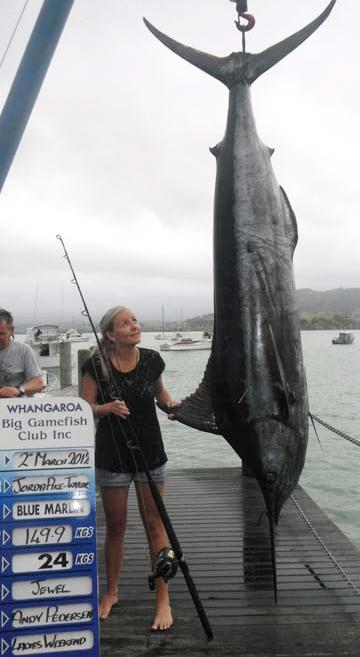 This from Auckland Now …

_”[Jorda] had just cracked open her first beer aboard Jewel when two marlin came up to her boat.

‘We all started screaming. Neither of them hooked so that was a bit disappointing.’

‘The line went and we all started yelling and screaming. I was worried I was going to run out of nylon … I thought that meant losing the rod and I was attached to it thinking ‘no way I’m going over’ and I started to unclip myself.’_
_
Pike-Taylor’s mother Sue Taylor convinced her daughter to hang on and her sister Kirinand and friend Victoria Robinson harnessed her to the boat.

She then fought the fish for 50 minutes…

‘The marlin did one big run then jumped in the air and went berserk. It went deep and did another run and after that I managed to haul it in.’ “
_
A brewski crushing, marlin whooping, 23-year-old preschool teacher? Welcome to the Land Down Under, mate.