On Friday, Benny Williams Jr. pulled a new state record largemouth bass from the muddy waters of Cedar Lake in... 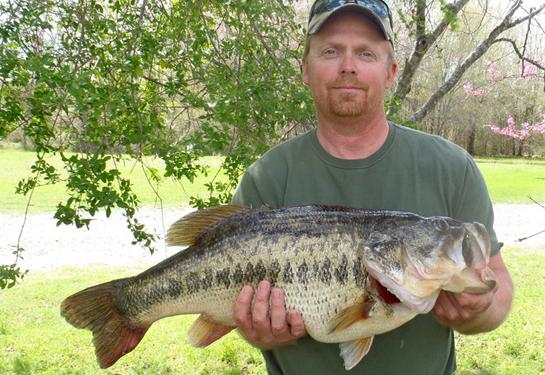 Williams’ fish weighed 14 pounds, 12.3 ounces, beating the previous state record, which has stood since 1999, by 1.3 ounces. Williams’ bucketmouth measured 26 inches long and had a girth of 22 3/8 inches.

_”He caught the record-setting bass in about 10 feet of water on a day that wasn’t particularly good for bass fishing after heavy rains muddied the water. He started fishing early in the morning with a variety of baits but settled on using a quarter-ounce Strike King football-head jig with a Berkeley Chigger Craw on the hook.

He anchored his 16-foot flat-bottom boat at the mouth of a cove that had steep banks and stumps along the shoreline and decided to pick the place apart with his jig. He caught ‘six pretty good little bass’ and then the big girl.

“‘She came up and scared me to death, shaking that big ol’ head around,’ he said._

Williams is a veteran bass man and has fished the Walmart Bass Fishing League Okie Division for several years. But of course, this is his biggest largemouth yet.

“Man, it’s crazy. I never hooked one that big. I tried to be calm but it’s kind of hard,” he said. “I put her in the boat and laid there a minute. I think I hollered but I’m not sure.”