On Sunday, Pennsylvania angler Todd Young caught his first fish out of Lake Erie and broke a 16-year-old state record.... 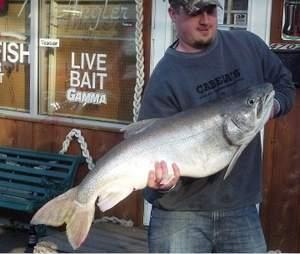 On Sunday, Pennsylvania angler Todd Young caught his first fish out of Lake Erie and broke a 16-year-old state record.

Young was fishing on a charter boat with his dad and friends out of Harborocreek Township when he hooked into this big laker. A 10-minute battle ensued.

“I knew it was a big fish when the fishing line just screamed off the reel,” Young told GoErie.com. “I tried to set the drag, and the line was still screaming.”

“I did it all solo,” he told the site. “As soon as I saw the dorsal fin, I started shaking from all the adrenaline.”

When Young finally wrestled the fish into the boat, the anglers weighed it on a handscale. They knew they had just caught a potential state record. They brought the fish in to be officially weighed and it went 29.28 pounds, measured 39 inches in length and had a 26-inch girth.

Young’s fish broke the old state record by more than a pound. What’s the world record for lake trout? Seventy-two pounds caught by Lloyd Bull in 1995 in the Northwest Territories.