Zack Seitz, an 18-year-old kid from Wisconsin, arrowed this massive carp last month and went on to crush a Badger... 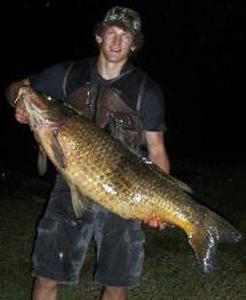 Zack Seitz, an 18-year-old kid from Wisconsin, arrowed this massive carp last month and went on to crush a Badger State record.

Seitz shot the 59-pound fish while hunting carp with a couple buddies late one Friday night on Long Lake.

This from the Milwaukee Journal Sentinel…

_”Two carp appeared in the water ahead of the boat. Seitz and [his friend Nic Gerhartz] readied their bows.

But then something diverted Seitz’s attention. ‘I saw a huge, glowing shape out of the corner of my eye,’ Seitz said._
_
It too was a carp. And even though it was farther away, Seitz opted to shoot for it.

He turned, aimed and released an arrow. The water erupted and the fish began swimming away from the boat.”_

It took Seitz about five minutes to wrestle the fish into the boat. It ended up breaking the previous state record, set in 2006, by eight pounds.

Nice shooting Zack, and congratulations on a great fish!