Check out the catch of the day. Captain Jon Haney, Justin Carlson and Eric Martin caught this 497-pound shark while... 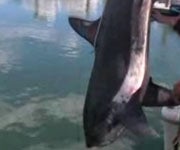 Check out the catch of the day. Captain Jon Haney, Justin Carlson and Eric Martin caught this 497-pound shark while fishing 30 miles off Montauk, N.Y.

_”It was probably a half hour after that we got a bite,” Haney said.

The bite on the end of the line wasn’t the kind of catch you see everyday, Haney said. It was a thresher shark, and the crew spent close to four hours reeling it in._
_
When they pulled into Niantic Dockominium with the shark on board this afternoon, a small crowd gathered for a weigh in…

After taking the shark down, the crew said they planned to share the bounty.

‘We’re hoping to cut it up, make some nice thresher steaks,’ Motta said. ‘Just some wonderful harvest of the sea.'”_