Mystery surrounds what is believed to be an 800-pound shortfin mako caught Monday off the coast Marina Del Ray, California.... 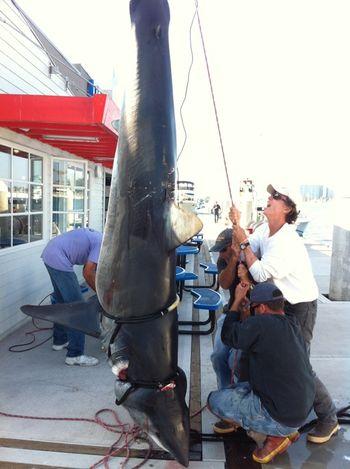 Mystery surrounds what is believed to be an 800-pound shortfin mako caught Monday off the coast Marina Del Ray, California. This fish was brought into the Marina Del Rey Landing by a group of men that, four days later, still remain unidentified. Speculation abounds as to who the men are, where they’re from, and who actually reeled in the large fish. Some have questioned if the men were licensed or whether the boat that they were on was an actual charter boat.

All that is known for sure is that the shark weighed more than what the Landing’s scales could accommodate. Del Rey Landing’s assistant manager Tony Velardez told he Marina Del Rey Patch, “It’s been at least a couple of years since I’ve seen anything that big. Our scales only go up to 750 pounds.”

This led many to speculate that the shark weighed at least 800-pounds.

Do you know who these men picture are? Know anything about this shark? Contact us or comment below. This is one fish story we want to hear!