The most exciting catch at this year’s 10th annual Mystic Stripers Rodeo wasn’t a striper. It was a grouper. A... 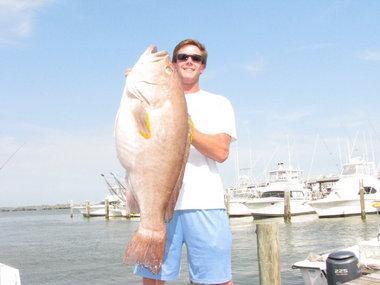 The most exciting catch at this year’s 10th annual Mystic Stripers Rodeo wasn’t a striper. It was a grouper. A 48.56-pound yellow edge grouper to be exact. And it’s potentially an Alabama State record.

The grouper was caught on a butterflyed pogey in more than 300 feet of water some 65 miles from shore by Tyler Kennedy. The 21-year-old Mobile resident comes from a serious fishing family that holds numerous fishing records.

In fact Tyler’s uncle, and current state record holder for yellow edge grouper, Jonathan Graham was with Tyler when he caught the monster fish. Graham’s fish weighed 46.50 pounds. Tyler detailed his catch for AL.com, “Once I landed the fish, I glanced at my uncle, Jonathan Graham. At first he looked a little sad. Who wouldn’t be sad at losing a world record? After a minute or two, his face broke out in a big smile and he told me that he was glad the record would remain in the family.”

Tyler’s luck didn’t end with the grouper though. He later caught a 4.41 pound orange roughy and a 4.50 pompano dolphin – both are also possible record breakers!