A swanky Italian bar in Manhattan hardly seems like the place to interview Eric Young, a bearded, fishing nut, wrestler... 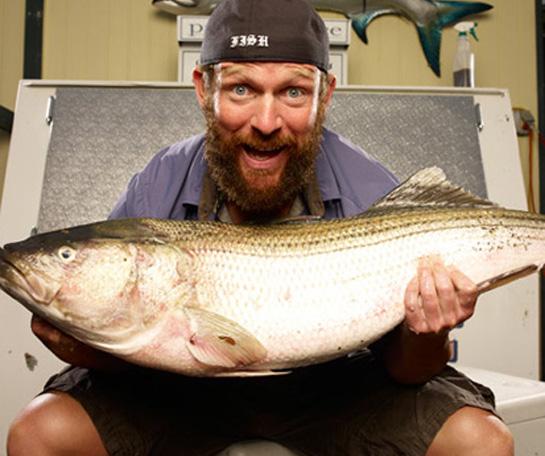 A swanky Italian bar in Manhattan hardly seems like the place to interview Eric Young, a bearded, fishing nut, wrestler turned television host. But yesterday morning, among the ties and skirts, that’s exactly where I caught up with him to talk about his new show, Off the Hook: Extreme Catches (Personally, I think he was in it for the scrambled eggs and bacon).

In his wrestling career, Young has portrayed an affluent villain, deranged super hero, and a delusional champion with severe ADHD, but his new show on the Discovery Channel allows him to focus his strength and enthusiasm on adventures like paddle-board shark fishing.

Here’s what he had to say for himself…

Courtney Brodie: What makes this show different from other fishing shows?

Eric Young: It’s different in the way that it’s fishing like you haven’t heard of … It’s all fringe stuff that even people in the fishing community find interesting. I mean, first and foremost it’s a television show. It’s funny. Even if you aren’t into fishing or you’re not a fisherman you could watch the show. It’s about interesting people doing interesting stuff … I’m very novice when it comes to fishing. So most of the time it’s just me meandering through these things with professionals teaching me how to do it in like, a day, and I do it with them.

CB: What is the craziest style of fishing that you have done so far?

EY: I think sharks on the paddleboard. That was nerve wracking. You know you’re on basically on an oversized surfboard. So I had to learn how to do that first. I mean luckily I have pretty decent balance so I caught on to that pretty quickly. That’s the first part of the battle, but then there’s a six-foot shark that’s in the water. They’re powerful, I mean, crazy powerful in the water, even out of the water, and it’s all you. There’s blood in the water, sharks swimming around, and the only thing between you and the shark is four inches of fiberglass.

CB: What fish would you least want to wrestle?

EY: Oh yeah, you can see them in the water, we caught mako sharks and blue sharks at the same time, and they’re a predator. Just the way they swim is different. A blue shark is very lumbering and real slow, and a mako shark is like fleeting, it’s looking to get something you know?

EY: Yea, you can see it by the way they swim, and their eyes are all black, and they have crazy teeth. Yea, they’re mean, mean looking. Just unbelievable to watch in the water, because they’re so fast. No thanks, I’ll stay on the boat.

CB: Do you think Mako would make a good name for a wrestling character?

EY: Well, actually I’ve been tagged up with The Shark Boy before.

EY: Yup, he’s a grown man that wears a cartoon shark mask. He’s a good friend of mine, great guy.

CB: Could he possibly make an appearance on the show?

EY: You know, I think it would be awesome to catch him and then throw him back, because he’s not good enough [laughs] yea that’d be great.

CB: In an all-Canadian, tag-team, cage match who would win: Neil Young and Keanu Reeves or Celine Dion and that guy from Sum41?

EY: Yea, probably been in a few fisticuffs. Not afraid to fight for what he believes in. Yea, I think Neil Young and Keanu Reeves probably would win. And Keanu Reeves was in the Matrix, so he knows kung fu.

CB: Yea, but he was also in Bill and Ted’s Excellent Adventure.

EY: And he was also the goalie in Young Blood, the hockey movie. Actually my finishing move is called the “Young Blood Neck-breaker,” named after that movie.

CB: In your Youtube series you said you prefer fighting in your underwear, do you also prefer fishing in it?

EY: I do, I like to be relaxed … Speedos have shown up on occasion on the show. Somehow it’s become my friend. I don’t know how that happened actually. I don’t look great in them and, uh, there’s definitely people who look better. It’s definitely become my thing though.

CB: Have you gotten any of the guys you’re fishing with to also wear them?

EY: One of the guys, I got him in a Speedo. He said it looked so comfortable he thought he would try it. I’m not sure it’ll make it into the show. He’s an ex-marine. His name is Ed. Literally one of the toughest human beings I’ve ever met. He was a recon sniper, combat diver, scuba dived under the back of a sub. He was a bad, bad dude … Like a serious marine. But if I could get him to wear it, I can get anyone to wear one.

EY: The best thing, in a weird way, was snakehead.

EY: Yea, it’s the ugliest fish I’ve ever seen, they look like dinosaurs and they smell. They’re slimy, they hide in the mud, but in true southern fashion, we deep-fried it.

CB: I don’t know if you’ve been asked this before, but how long have you been growing your beard?

EY: I haven’t gotten that one yet, I knew it was coming. I started growing it, not last spring, but the one before that. This is at least trimmed. I do manicure, because, I mean it looks gross like this, but it gets…

CB: Has it made you a better wrestler, a better fisherman? Any special powers?

EY: It’s made me happier, because I don’t have to shave everyday. Certain people look at it as a sign of being tough in the fishing community. It gives me credibility with them. It’s like fishing street cred. They’re like, “He’s got a beard, he must know what’s going on.”

Off the Hook: Extreme Catches premieres Monday, July 30th at 9:00 p.m. (ET/PT) on the Discovery Channel, as an appetizer for Shark Week. New episodes will begin airing on Animal Planet Sunday, August 19, at 9 PM (ET/PT).

Wondering how a pro wrestler ended up hosting an extreme fishing show? Check out his Youtube mini-series, Eric Young Goes to Hollywood.