Mark Possien caught a record-breaking black grouper off the Alabama coast by slacking off. The construction supervisor was fishing in... 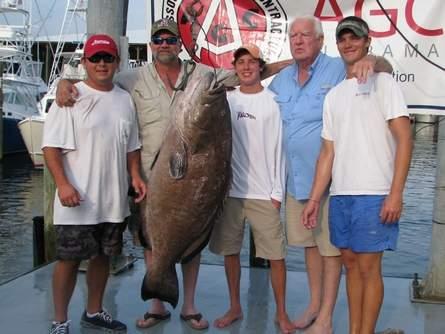 Mark Possien caught a record-breaking black grouper off the Alabama coast by slacking off.

The construction supervisor was fishing in the Alabama Associated General Contractors Bonanza Days fishing tournament on August 11 when he hooked into monster fish. Mark said he knew it was a big fish the moment it hit the 60-pound test line. He also knew that the fish would head for the confines of the shipwreck Mark was fishing over if he didn’t do something creative.

So he gave the fish some slack.

The plan worked allowing Mark to land the 106-pound, 3.2-ounce black grouper, a weight that dwarfs the state’s standing record of 67 pounds, 15.5 ounces. Mark’s fish is so large that it will likely set an International Game Fish Association 80-pound class line world record as well. The current record holder in that division is a mere 59 pounds (the IGFA has 50-pound and 80-pound classes. Mark’s 60-pound line puts him in the 80-pound class).

The fact that Mark caught this fish at all is worthy of some sort of record as black grouper aren’t generally found in Alabama waters. They tend to stay further south in Florida waters.

Mark is having a replica of his potential record breaker made. He donated the carcass for scientific study after removing the meat.