Shark Fishing: Do You Have What it Takes?

Think you have what it takes to catch the ocean’s top-of-the-food-chain predator? I don’t believe you are man enough for... 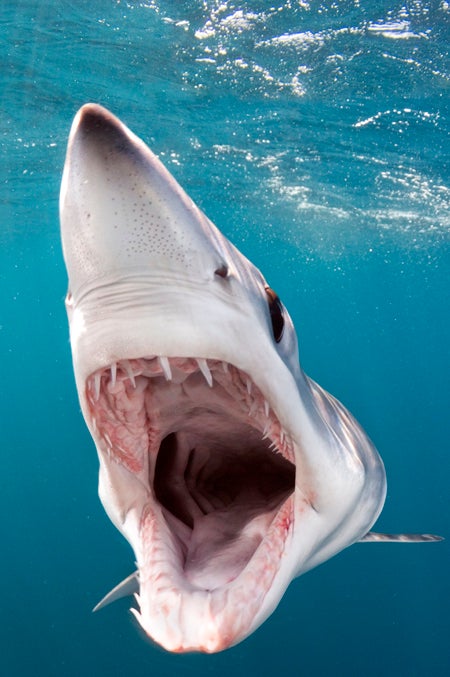 Think you have what it takes to catch the ocean’s top-of-the-food-chain predator? I don’t believe you are man enough for sharks.

But mainly, a big-shark encounter will make you realize you have been missing out on the fight of your life with a fish that is so aggressive, you can likely catch one whenever you want to.

When I told Madfin Shark Series competitor Paul Michele that I wanted to catch a big shark (anything over 7 feet), the 38-year-old Florida resident said with a laugh, “I’m not that mad at you.” Evidently, he wasn’t telling the truth.

Launching out of Stuart, Florida, Michele–who has caught no fewer than 20 species of sharks around the globe–drove us to a wreck not 2 miles out of the inlet. After setting out a chum bag filled with chopped menhaden, he launched a slab of amberjack fillet, rigged on an 8-foot braided-wire leader with a couple of 12/0 J hooks behind 6 ounces of lead, aft of the boat.

The clicks started slowly at first, the reel alerting us that our bait was being eaten, and then gradually increased until the Daiwa was humming.

“Good luck!” Michele said, laughing, as I pulled the rod from the holder and set the hook into what felt like a train on the other end.

Forty minutes into the battle, I cried uncle. The rod, along with my Man Card, was given to Michele, who expertly fought the fish closer to the boat until the cramps in my lower back dissipated. I grabbed the rod again and suffered through another 20 minutes of heated battle, eventually reeling the braided steel leader into the open palm of my guide.

We tail-roped the estimated 400-pounder and celebrated before releasing it. The experience was humbling but exhilarating. Most of all, though, it was easy–at least the hooking-up part. If you have yet to test your mettle on a similar toothy beast, the four species below represent your best opportunity for hooking a shark over 7 feet. But heed this warning: Have your Man Card laminated–we wouldn’t want tears smearing the expiration date.

From the September 2011 issue of Outdoor Life magazine.