Record Striper Rejected by IGFA, Angler Loses Out on $1 Million

After an agonizing two-month wait, angler Rodney Ply finally learned that his fish is not worth a million dollars. Ply’s... 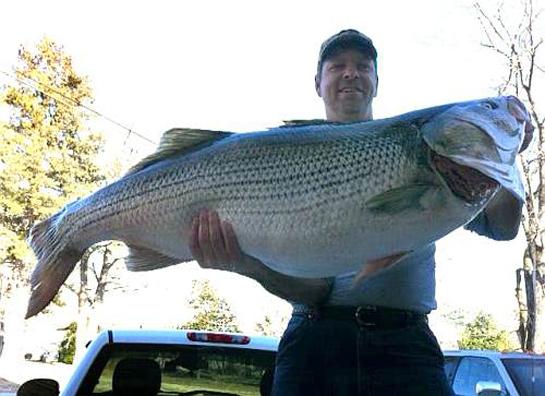 After an agonizing two-month wait, angler Rodney Ply finally learned that his fish is not worth a million dollars.

Ply’s rollercoaster fish ride began … well, two months ago when he pulled a freshwater striped bass that weighed more than 68 pounds from Bull Shoals Lake in Arkansas on Feb. 18. Ply’s fish was so large that it not only shattered the state record by more than four pounds, it also qualified for a $100,000 prize. Ply had entered Mustad Hook’s “Hook-a-Million” contest where state record fish qualified for a $100,000 winning, and $1 million for world record fish. Ply tried to have his fish weighed on a certified scale and verified by an official game and fish commission witness but his every attempt was met with rejection and or excuses (read the full story about Ply’s record striper). Failure to have the fish weighed and witnessed meant no state record and no shot at 100K.

With so much riding on his fish, Ply emailed an appeal to Arkansas Game and Fish Director Loren Hitchcock. The response Ply received was anything but helpful or professional. It read in part, “You seem to think I personally certified all previous records and it is my decision to vary from standards. It doesn’t work that way on my watch. You are misinformed. I’m not going to vary from written guidelines.” The only hope Ply had left at this point was left riding on whether his catch could be certified as a world record by the International Game and Fish Association. If the organization ruled in his favor he would still have a shot at Mustad Hook’s million-dollar prize.

Yesterday the IGFA informed Ply that while his fish is certainly large enough to take the new record it won’t be as the rig he used to catch it was “illegal.” The rig Ply used was of his own design and is considered an umbrella rig or Alabama lure.

The following email excerpt sent to Mr. Ply by Jack Vitek, World Records Coordinator for the IGFA explains: “After significant review by our Rules Committee, we consider your lure to be a spreader bar arrangement. IGFA Equipment Regulations state: ‘spreader bars are permitted to be used provided that the actual fishing line is attached to the snap or other release device, either directly or with some other material.’ Since the angler’s line is not attached to a release device so that the hook could be disengaged from the lure arrangement, this lure violated IGFA equipment rules for spreader bars.”

Ply said he will appeal this fateful million dollar decision.

What do you think? Is Ply getting hosed or does the IGFA have a good point? Comment below!