Saltwater anglers near Montauk won’t have to worry too much about having their fishing opportunities hampered by Hurricane Sandy. They... 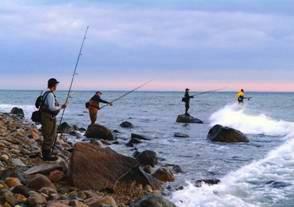 Saltwater anglers near Montauk won’t have to worry too much about having their fishing opportunities hampered by Hurricane Sandy. They weathered the brunt of the storm with flooding, but minimal devastation.

“Along the oceanside in the Montauk area we received a lot of beach erosion, but no real ‘shut down the operation’ type of damage,” stated Paulie Apostolides, Paulie’s Bait and Tackle, Montauk. “The people that got hit the hardest around here were the businesses and marinas on the North End, West End, and Lake Montauk area, where the canals and bays flooded heavily, but everybody reopened pretty quickly.”

Apostolides noted that most people had pulled their boats out of Sandy’s path prior to the storm, and about a third of the town lost power through the whole ordeal.

“Everybody’s doing well around here. No inlets are obstructed, most of the tackle shops were unharmed. We didn’t get whacked like they did in Jersey, I mean we did get flooding, but no destruction like they did.”

What has hurt fishing in the region however has been the spike in gas prices. Anyone who still has his boat in the water has deal the recent increase in gas prices. The good news is that many party boats are still moored and sailing in the marinas, and that there is plenty of action on tap.

“The herring showed, later than usual, but they are here, and guys are still trying for striped bass. The tautog bite has really gotten going on too, but the highlight is that our cod fishing is really on the move now. Guys are heading out to the banks to pull on cod up to 15 pounds, and that fishery is just getting warmed up.”

Look for cod and tautog to be the mainstays that pulls the Montauk recreational fishing industry through the winter months.