John Petruescu was fishing at Hurricane Bank off Mexico, aboard the Excel out of San Diego, earlier this week when... 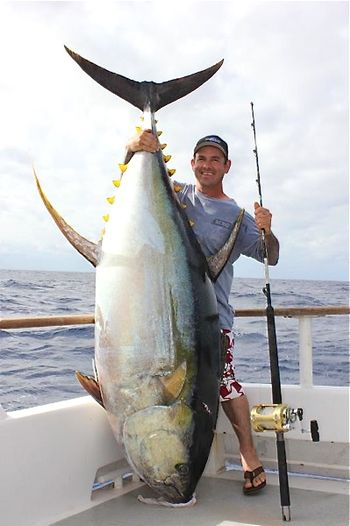 John Petruescu was fishing at Hurricane Bank off Mexico, aboard the Excel out of San Diego, earlier this week when he hooked into what may go down in the books as the largest yellowfin tuna ever caught on rod and reel. The leviathan of many a sushi dream, caught on a live skipjack tuna, was so large it required five gaffs to steer it into the tuna gate–which was almost too small to accommodate the monster fish.

While the crew estimated the fish’s weight at around 400 pounds by utilizing the tried and true at-sea estimate method of taping out, outdoor writer Pete Thomas exclaims on his blog petethomasoutdoors.com that the fish is much larger and that it will be officially weighed when it returns to San Diego late Saturday or early Sunday.

If the fish is as large as we have been led to believe, Petruescu has a good chance of beating the IGFA all-tackle world record of 405 pounds.

A 427.5-pound yellowfin was caught by Guy Yocom while fishing out of Cabo San Lucas in September. However, that fish has yet to be approved by the IGFA as an all-tackle record.

It will be interesting to see what happens come Saturday night!