The river’s muddy ebb and flow remains unchanged from centuries past–days when tall, wooden sailing ships made wake on the... 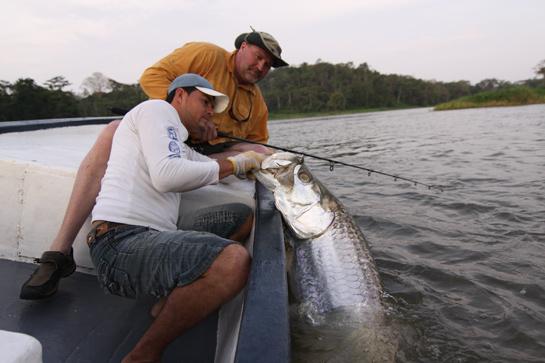 The river’s muddy ebb and flow remains unchanged from centuries past–days when tall, wooden sailing ships made wake on the protracted passage through this Central America rain forest.

I had ventured to Nicaragua in search of gold, but not in the traditional sense. My journey brought me here in pursuit of the golden tarpon.

The River
El Desaguadero (“the drain”), otherwise known as the San Juan River, meanders, rolls, and rages east, some 190 kilometers from Lake Nicaragua to the Caribbean Sea, transecting the Nicaraguan and Costa Rican border. For those motoring the river for the first time, perhaps most striking is the region’s mind-boggling biodiversity and stark enormity.

Fishing days are long in the jungle. We spent hours trolling battle-worn, large-lipped plugs from open skiffs on light spinning gear. When the sun wasn’t pounding us, we were pelted by raindrops as heavy as lug nuts. Both challenged our determination to go on.

Despite the temperamental climate, I had the best seat in this panoramic terrarium from a folding chair onboard. The chatter of a two-stroke kicker accompanied us up the river.

The San Juan River’s freshwater offers silver kings a unique habitat. Here, with an abundance of bait, fish stay longer, presenting a considerably larger fish-class than almost any other tarpon fishery in the world. The tannin-stained waters discolor older fishes’ scales, turning them an uncharacteristic burnished gold. The remoteness of the river offers tarpon relief from fishing pressure too–adding to their abundance and size.

But as is the case with any fishing, the bite can be hot and then take a turn for naught. During my time on the grand river, abnormally high waters made fishing tough. Bites came infrequently and were cherished.

Gold Mined
On the last morning, with the fat baits rattling the rod tips on our daily pilgrimage up the river, the planets aligned in spectacular fashion. All of a sudden, a tarpon breached the surface and was airborne, pitching an aerial tantrum. His gill plates flared, then audibly clattered as he toiled to unleash himself from the plastic plug that had deceived him.

During the battle, with an aching back and shoulders, I became introspective. In a fleeting instance, I realized why these are coveted fish and why Nicaragua is like no other place–a destination where thrill-seekers, those in search of unbridled adventure, can quench their thirst for gold. It’s where the fish they call the Silver King grows big, and you can catch one without ever seeing a sign of another angler.